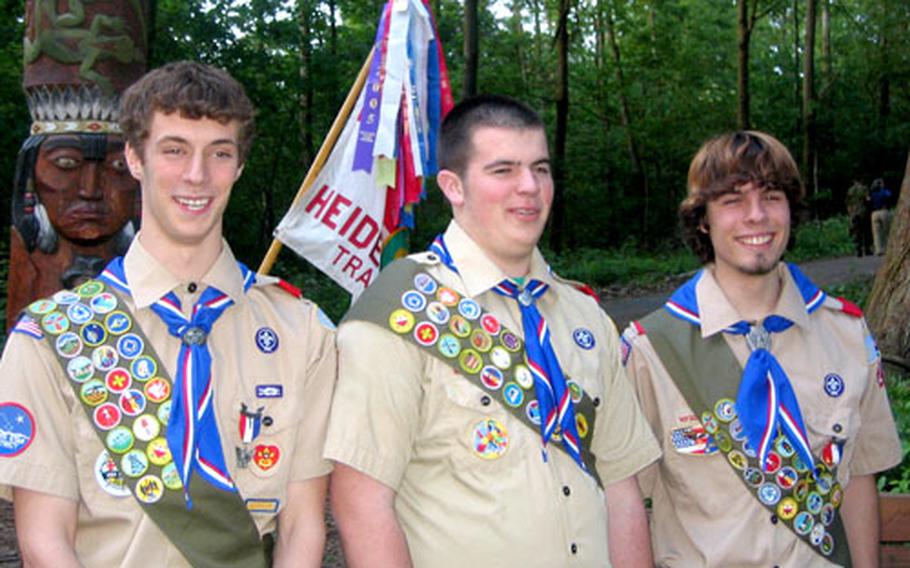 The three are members of Troop 29 of Heidelberg, Germany, according to Assistant Scoutmaster Michael Hokenson.

According to Hokenson, in order to become an Eagle Scout, each had to participate in several community service projects in addition to serving in leadership roles and earning numerous merit badges. Each project required the Scouts to organize tools and supplies and to direct a large group of volunteers.

Stephen, 17, and a junior at Heidelberg High School, is the son of Maj. Andrew and Denise Harvey. His father also earned the rank of Eagle Scout.

Nathan, 17, and a 2005 graduate of Heidelberg High School, is the son of Lt. Col. Michael and Michelle Hokenson. He joins his two older brothers, Phillip and Alex, as Eagle Scouts.

His project involved cleaning more than 500 steps above the town of Rohrbach, known as the &#8220;Stairway to Heaven.&#8221; A number was painted on each step, and dirt, vegetation and trash were removed. He initiated contacts with the German community to get approval, and, as a result, several other Eagle projects were coordinated with the local community.

Blose, 18, and also a 2005 graduate of Heidelberg, is the son of Lt. Col. David and Cathleen Blose. He joins his father as an Eagle Scout.

His project involved clearing, repairing and widening a historic trail near the Heidelberg castle. His efforts enabled Heidelberg to host a national fitness event using the trail. Blose was responsible for rehabilitation of the trail as well as building a bench.

All three have been active in Scouting for more than 10 years.