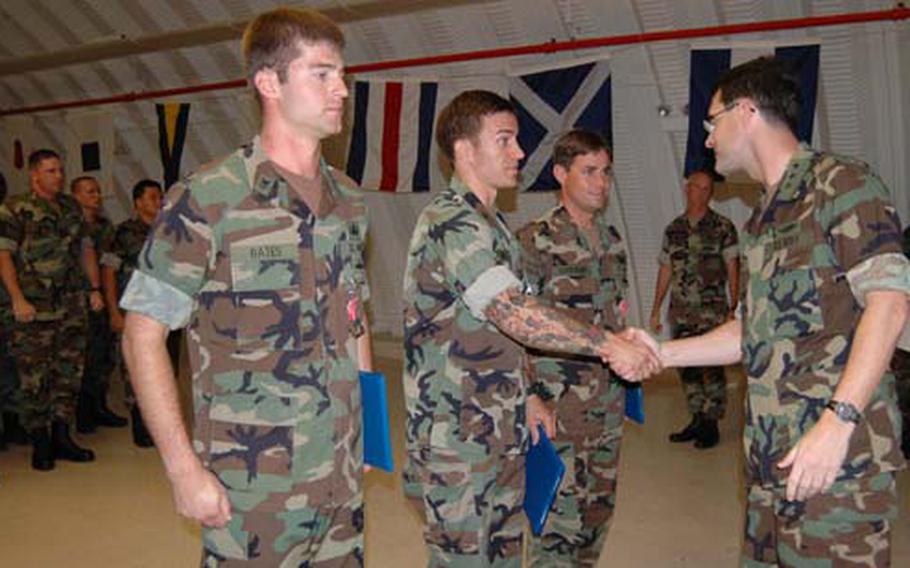 While most U.S. servicemembers in Iraq were trying to avoid bombs, the sailors of Explosives Ordnance Disposal Unit 5 were seeking them out.

The Guam-based unit destroyed hundreds of weapons caches and explosives, sometimes resorting to the dangerous task of defusing bombs with their hands, in Anbar province during the past year&#8217;s handover to Iraqi forces.

All three men performed "extremely dangerous" duty, manually disarming improvised explosive devices, according to a release from U.S. Naval Forces Marianas. The sailors were awarded the medals during a recent ceremony on Guam.

"It&#8217;s definitely an honor but more important to me, everyone made it back safely," said Matics, a team leader and leading petty officer during the unit&#8217;s deployment to Iraq from November through May.

He said countless servicemembers are doing similarly dangerous and heroic work in Iraq every day.

"You have to take that kind of stuff (medals) with a grain of salt," Matics said.

Due to the sensitivity of ordnance detection and removal, the sailors said, they could not discuss the details of their work in Iraq.

The EOD unit members said they worked in the Hit and Rawah areas of Anbar, where U.S. forces were methodically shoring up security and turning areas over to the Iraqis.

"When we showed up, the cities all around me, all those cities were not turned over yet," Vandevoort said. "We would be out there all day just destroying enemy ordnance."

Other times, the sailors would wait long days for a call from fellow servicemembers who needed the ordnance teams.

"You really can&#8217;t have a set schedule," said Vandevoort, who along with Bates was part of the only explosive ordnance disposal team in Hit. "We never knew when that call was coming in."

When a call did come, the unit would mobilize, usually with a combat tracking dog, and examine the ordnance, which could be a weapons cache or an IED, Vandevoort said.

Manual disarmament is not the team&#8217;s first choice, he said. But when it becomes necessary, the unit takes precautions.

"You have to know what the fusing is and if the stuff is booby trapped," said Vandevoort. "You make sure your security is watching for an ambush."

Vandevoort disarmed three IEDs manually, Bates disarmed four, and Matics "exposed himself to great risk and conducted immediate, hands-on procedures on improvised explosive devices under the most hazardous conditions, including the threat of enemy controlled detonation," according to U.S. Naval Forces Marianas.

As the turnover stepped up in February, the number of planted bombs in that area of Anbar also spiked. The explosives increased by 30 percent to 40 percent in the unit&#8217;s patrol area along the Euphrates River, Vandevoort said.

"When a new unit comes in, they take over the space; the insurgents will feel them out and see if they are vulnerable," said Bates.

The unit likely saved lives by destroying the ordnance in Anbar, Bates said.

"The best thing is that you got guys, Marines, who are out there every day, and I enjoy taking care of those guys," he said.