Three GIs based in Germany charged in crime spree 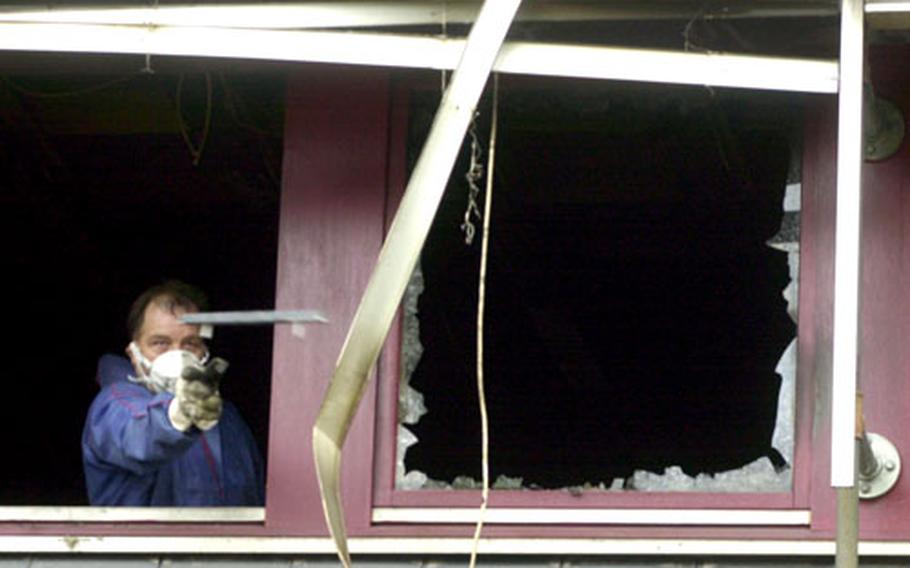 A German salvage worker tosses scrap out of the burned out interior of Baumholder’s city goverment building. (Terry Boyd / S&S)

A German salvage worker tosses scrap out of the burned out interior of Baumholder’s city goverment building. (Terry Boyd / S&S) 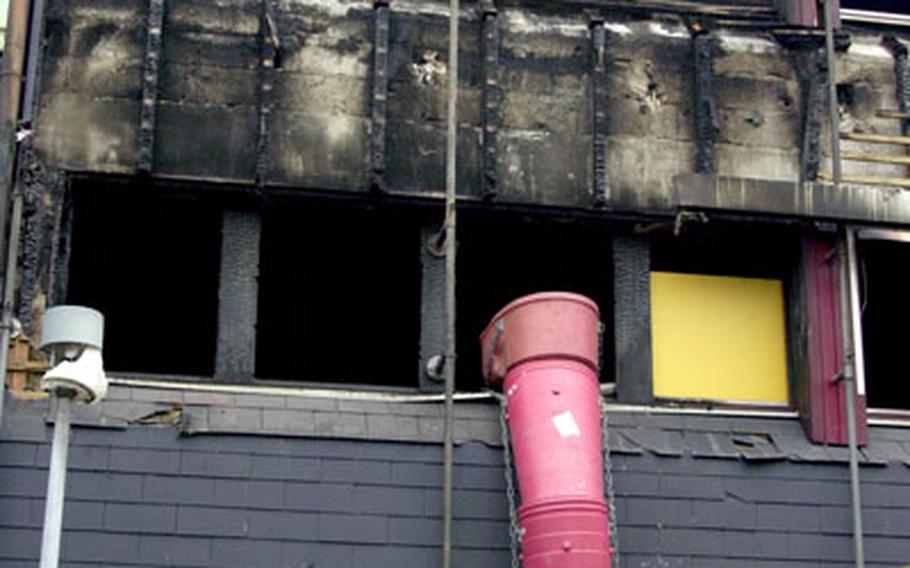 The exterior of Baumholder’s city government building is badly charred from a fire, believed to have been set Thursday by a group that included three U.S. soldiers. (Terry Boyd / S&S)

BAUMHOLDER, Germany &#8212; Three Baumholder-based soldiers &#8212; at least two of whom are AWOL &#8212; have been charged in a mini-crime wave that resulted in about 1 million euros in damages.

That spree includes setting a fire Thursday that severely damaged the local city government building, or Rathaus, the theft of Army computers and an attack on a German taxi driver, German police said Monday.

The U.S. soldiers &#8212; whom German authorities declined to identify &#8212; are included in a group of 10 people between the ages of 19 and 23 under investigation for the crimes, according to Monika Peters, press officer at police headquarters in Trier.

German officials have handed over two of the soldiers to Army authorities, Peters said. Under the Status of Forces Agreement, Germany has the option of prosecuting U.S. soldiers accused of committing crimes, or handing them over to U.S. authorities.

The status of the third soldier is unknown.

One of the Baumholder-based soldiers, a 20-year-old man, is suspected of actually setting the fire, Peters said. The soldier told police he doesn&#8217;t remember anything because he was drunk, she said.

The fire and heat were so intense that they gutted most of an entire wing of the three-story government building, said Baumholder Police Chief Siegfried Meyer.

The wing, which includes the city&#8217;s finance department, had to be evacuated and operations moved to rented space because of the fire and water damage. The cost to the city is estimated at more than 1 million euros, but may be far higher if investigators decide the wing has to be torn down, Meyer said.

The arson was just one incident that happened Wednesday evening and ran into the early morning hours on Thursday. Investigators believe four U.S. soldiers, including the three arrested in the Rathaus fire, took a cab to Baumholder from Idar-Oberstein, about 20 miles northeast.

The taxi driver said the group went to several locations in Baumholder, changing their minds several times, according to police.

Finally, when they told him they wanted to pay the fare and the cabbie took out his change purse, one of the soldiers grabbed him from behind, choking him, Meyer said. The soldiers then stole about 200 euros from the man, Meyer said.

At some point, the taxi driver set off an acoustic alarm, and the soldiers fled. Later that night, witnesses put the soldiers at the government building.

The police also suspect they stole laptop computers from a building on base sometime during the night, and attempted to break into an Internet cafe near the Rathaus, Meyer said.

Witnesses got such good descriptions of three of the soldiers that police were able to arrest them at three different apartments in Baumholder by 2 p.m. Friday, he said. At least two of the three were absent without leave from their units, and all three were living with Germans, Meyer said.

Stars and Stripes assistant Moni Koch contributed to this story.