Three friends on same path to the sky 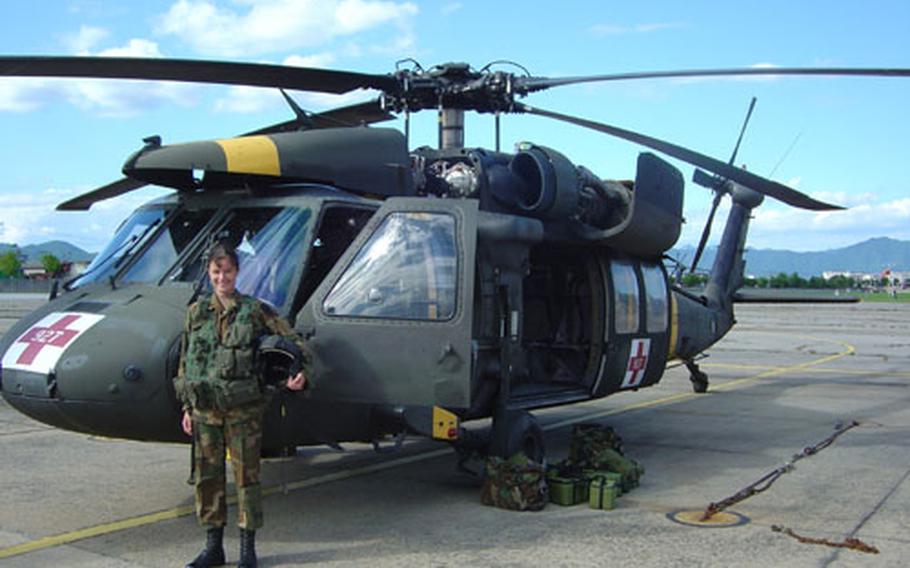 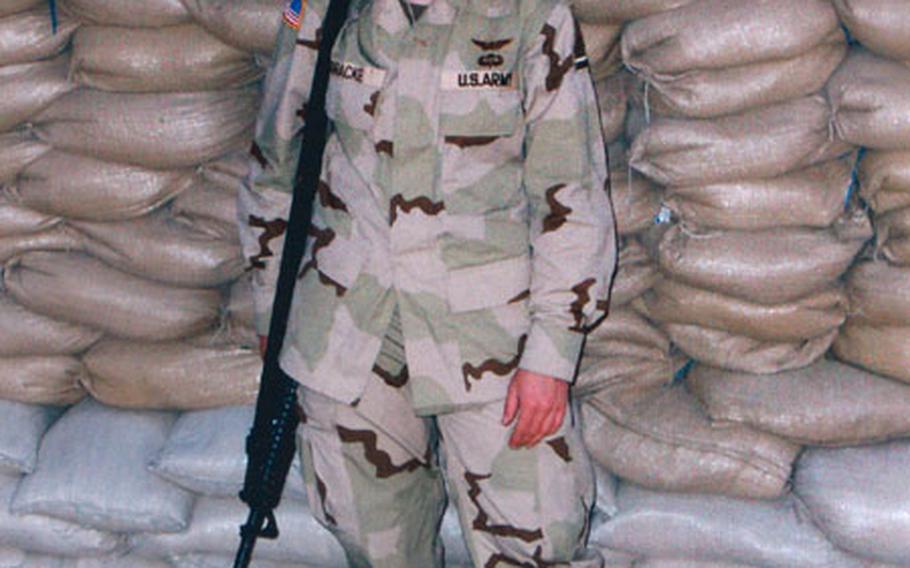 Brande Goracke, an Apache pilot, is stationed at the Baghdad Airport. () 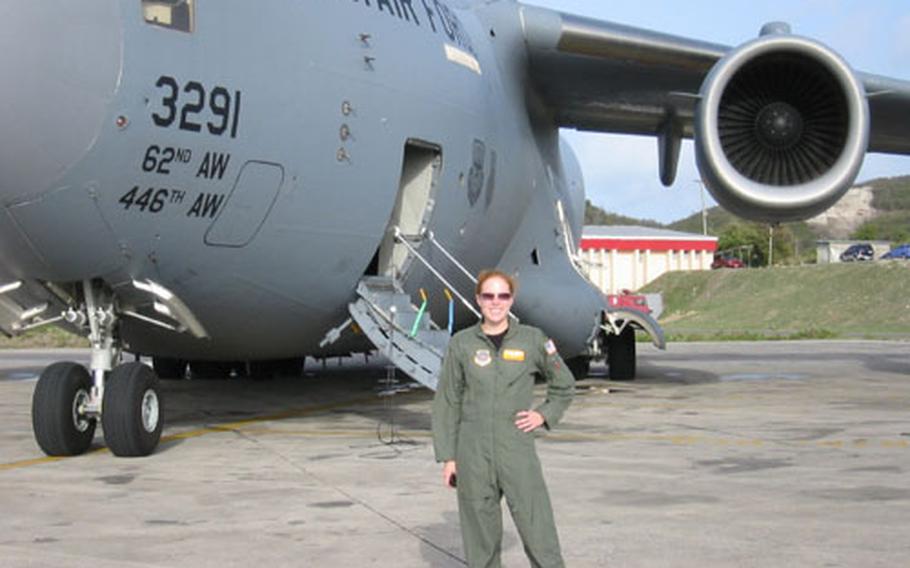 Karen Courington&#39;s first mission in her C-17 was to Ascension Island in the Pacific. ()

You could have seen them flying down their Northern Virginia high school field a few years ago, their lacrosse racquets grasped in their fists as they raced toward the goal. Teammates Karen, Brande and Linda played hard, and all took honors classes. They graduated from the same high school in the same year, and they lived in the same neighborhood &#8212; even for a while on the same little street, named Lobelia Lane.

Now they live in different parts of the world. They&#8217;re still flying. This time, though, it&#8217;s with their hands on the controls, in the cockpits of a C-17 transport, an Apache gunship and a Black Hawk helicopter. The former friends who lived so close didn&#8217;t plan to become military pilots, they said. But somehow they all did.

The three new pilots, all 24 years old and on their first assignments, were never best friends who had sleep-overs. They also never dreamt, they said, of wearing a flight suit to work when they grew up. Instead, they grew interested in becoming pilots after joining ROTC to help pay for college and finding themselves increasingly drawn toward the rigors and rewards of flying aircraft. So despite college majors such as marketing, forestry and political science, the three young women who graduated in 1997 from Robert E. Lee High School in Springfield, Va., each ended up in a highly technical, competitive career in which there remain very few women.

In 2001, the latest year for which Department of Defense statistics were available, 653 of nearly 14,000 active-duty military helicopter pilots were women, or 4.6 percent. Women accounted for 4.2 percent of military transport plane pilots &#8212; 366 women compared to 8,244 men &#8212; and just 1.45 percent of 7,849 fighter and bomber pilots. Women made up a slightly larger percentage of civilian pilots &#8212; about 6 percent, according to the Federal Aviation Administration.

Still, the number of female military pilots, while small, has grown slowly but steadily since the mid-1970s, when women first were allowed to become military pilots. (They weren&#8217;t allowed into combat aircraft until the early 1990s.) And their numbers have grown even as the total number of military pilots has decreased. In 1991, for example, 342 of a total of 13,061 transport plane pilots were women.

Maj. Sandra Burr, a Department of Defense spokeswoman, said that while the DOD prefers a diverse force, no special efforts are made to add women to the rolls of military pilots. &#8220;We don&#8217;t have specific goals to recruit women pilots,&#8221; she said. The fact that there are more of them now than in 1991, she said, &#8220;is an evolution based on other factors.&#8221;

While the statistics highlight the coincidence of three girls from the same street going on to become pilots, in some ways, it&#8217;s not unexpected. Springfield, and their neighborhood of Daventry, is home to many military personnel and government workers. Two of its residents died in their Pentagon offices on Sept. 11, 2001, including the mother of Courington&#8217;s best friend. Courington already had started her military career, but the attack &#8220;solidified&#8221; her decision, she said.

&#8220;A lot of students from Lee High School have gone on to military careers,&#8221; said Mike Engley, former principal. &#8220;Springfield has a military presence. I think the military is positively viewed.&#8221;

Both of Goracke&#8217;s parents are retired lieutenant colonels. Her mother, Vickie, was in the Signal Corps; her father, Mark, was in Special Forces and sometimes went on classified missions and returned home with camouflage on his face. &#8220;And most of my friends were female officers who did great, exciting things. I would think that did have some influence,&#8221; Vickie Goracke said.

Courington, who was president of her high school class and a political science major at the University of Virginia &#8212; after declining a slot at the Air Force Academy &#8212; could have done anything, most people agree.

She was first in her flight class at Vance Air Force Base in Oklahoma. Now she&#8217;s flown her C-17 to numerous far-flung spots around the globe, including Baghdad, four times. She thought about trying to find Goracke but time was always too short, she said.

Linda Simson Craven did not come from a military family: Her mother is a sociologist and writer; her father works for the Treasury Department. But she said she remembers watching helicopters taking off from the Pentagon. &#8220;I thought it was so cool,&#8221; she said.

Craven&#8217;s parents told her stories about American history and taught her to play chess before she was 5 years old &#8212; she became a chess champion and competed once in Poland when she was quite young. &#8220;We used to make fun of her in junior high,&#8221; Courington said.

The three share an unusual competitiveness and athleticism. Each maxed-out their PT tests, which, some say, gives women in the military more credibility than anything else.

Before flight training at Fort Rucker, Ala., Craven was majoring in marketing at Ohio State University and acting as a hostess to the football recruits. Goracke was at Virginia Tech, already in an ROTC uniform, studying forestry on scholarship. &#8220;It was a way to pay for college, and then I just enjoyed it,&#8221; she said.

Courington said her experience also has been good, and she hasn&#8217;t noticed being treated differently in any way. But it&#8217;s lonely sometimes.

&#8220;You can get sick of being one of the guys all the time,&#8221; she said. &#8220;Although I like football, I get kind of sick of talking about fantasy football all day. Sometimes I just want to watch &#8216;Sex and the City&#8217; and paint my nails.&#8221; She recently forced some of her male buddies to watch several episodes of the show, she said, and they actually enjoyed it.

As a matter of fact, all three of the women describe themselves as &#8220;girly-girls&#8221; who like clothes and cosmetics. Courington&#8217;s mother, Stephanie, a sales executive with Mary Kay cosmetics, repeatedly has reminded her daughter of the importance of wearing sunscreen at 30,000 feet. &#8220;How many people have that conversation?&#8221; Courington said.

None is sure whether their military flying careers will be their only careers. Courington said she&#8217;s disappointed in the scarcity of other female pilots: In two years of flying, she&#8217;s only flown with two other women, she said.

Goracke, on the other hand, has encountered more women flying Apaches than she thought she would, including her company commander, a platoon leader and several trainers. But someday, she said, she might work for the Park Service.

Goracke sees another former neighbor all the time at the Baghdad airport. &#8220;Tom Potter &#8212; I see him every day,&#8221; she said. Potter, along with another boy, Russell Fox, graduated from Lee High School one year before her. They also fly helicopters for the Army.

&#8212; Sandra Jontz contributed to this report.