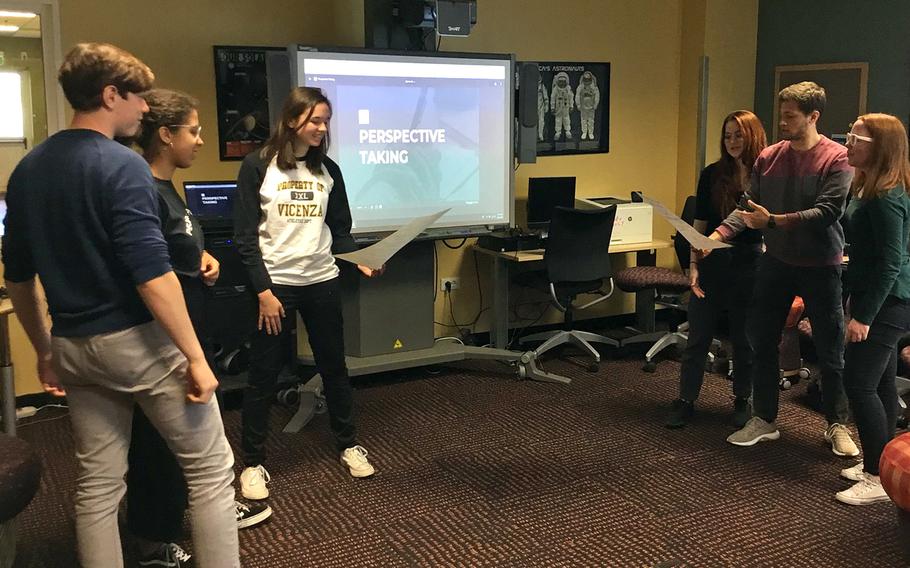 Students at Vicenza High School in Vicenza, Italy, are pictured in class in the spring of 2019. The school was one of three Department of Defense Education Activity schools to be named National Blue Ribbon schools. (Facebook/Vicenza High School)

Students at Vicenza High School in Vicenza, Italy, are pictured in class in the spring of 2019. The school was one of three Department of Defense Education Activity schools to be named National Blue Ribbon schools. (Facebook/Vicenza High School) 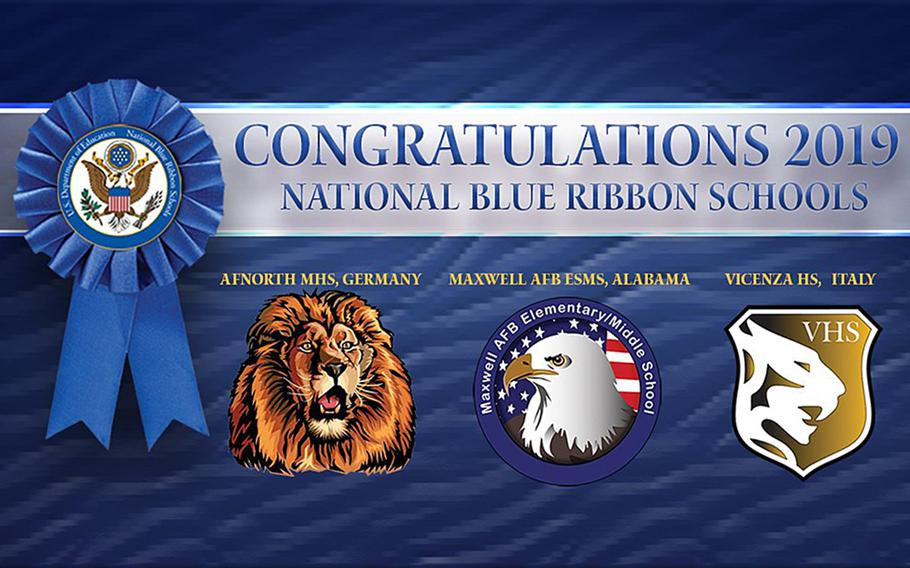 The Department of Defense Education Activity congratulated three Defense Department schools that have been named National Blue Ribbon schools for 2019. They are AFNorth Middle/High School in the Netherlands, Maxwell AFB Elementary/Middle School in Alabama and Vicenza High School in Italy. (Facebook/DODEA)

KAISERSLAUTERN, Germany — Three Department of Defense Education Activity schools, including two in Europe, have been ranked among the highest-performing U.S. schools, DODEA announced this week.

Vicenza High School in Italy, AFNorth Middle/High School in the Netherlands and Maxwell AFB Elementary/Middle School in Alabama were all awarded the Department of Education’s National Blue Ribbon for 2019 in recognition of their high academic standards, DODEA said in a statement released Tuesday..

The prestigious Blue Ribbon is awarded to schools with outstanding overall academic performance or notable progress in closing achievement gaps among students.

Out of the more than 132,000 public and private schools in the U.S., all of which are potentially eligible for the designation, 362 were recognized this year.

“I am extremely proud of the students, educators and staff at all three schools for earning National Blue Ribbon recognition,” DODEA Director Thomas M. Brady said. “Their achievements reflect our unwavering commitment to excellence in education for the military-connected families we serve.”

To be recognized as high performers, Blue Ribbon schools must do well in reading and mathematics assessments and have a high graduation rate.

Vicenza and AFNorth had a graduation rate of 100% in the 2017-18 school year, information from DODEA shows.

More than 60% of the 48 students who took Advanced Placement courses at AFNorth in 2018 scored a three or higher on the exam.

“This percentage is higher than DODEA or global averages!” the application said.

Many American colleges give students credit for AP scores of three and above.

The school also touted its unique location in Europe and the excursions it offers students as learning tools, to World War II battle sites and memorials, among other places, its application says.

Vicenza highlighted on its application the academic support it offers students. The school’s Student Support Team monitors grades, behavior and attendance on a weekly basis to flag at-risk students.

Maxwell AFB Elementary/Middle School has “provided superior education for pre-kindergarten through fifth grade children of United States military personnel living on Maxwell Air Force Base” since it was founded in 1963, DODEA said. Sixth through eighth grade classes were added in 2011.

Representatives from this year’s crop of Blue Ribbon schools will be honored next month at an awards ceremony in Washington, D.C.