Three days of proving in Vilseck 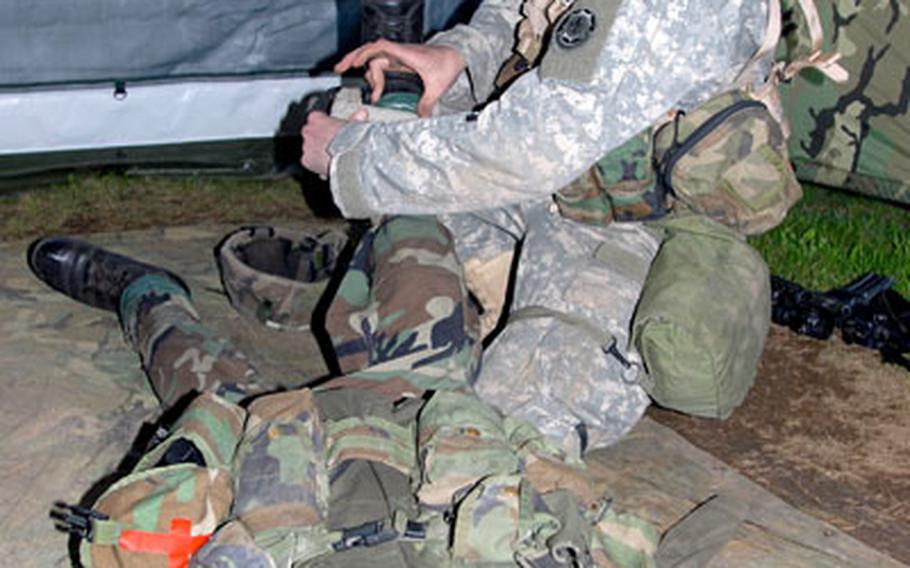 VILSECK, Germany &#8212; Grenades are flying, machine guns are rattling and soldiers are leaping between piles of sandbags at Vilseck Army Airfield this week in an effort to earn the coveted Expert Infantryman&#8217;s Badge.

Every eligible infantryman in the regiment will test this month and in May, he added.

Master Sgt. Joseph Dallas, operations NCO for the Vilseck testing, said candidates must pass physical training, qualify as rifle experts, pass day and night land-navigation tests, and march 12 miles in full kit with a 35-pound ruck in less than three hours before they can start training for the EIB. Mortar men also must pass a gunnery exam, he said.

Ogden said the training is useful to young soldiers.

Candidates get five training grenades and must use them to take out a target representing an enemy soldier 35 meters away by landing the grenade within a 5-meter circle, Kirk said. Then they have to zigzag their way to a bunker using cover and drop a grenade through a hole before racing over to a pile of sandbags and lobbing another grenade into a foxhole 20 meters away.

Nearby, at the first-aid lane, a candidate practiced bandaging a leg wound using a mannequin.

&#8220;The most common mistakes include loading ammo the wrong way or too slowly and failing to lift the feeder when clearing the weapon,&#8221; he said.

A big motivation for earning the EIB is the four-day leave pass soldiers get as a reward, said candidate Spc. Charles Heekin, 20, of Port Charlotte, Fla.