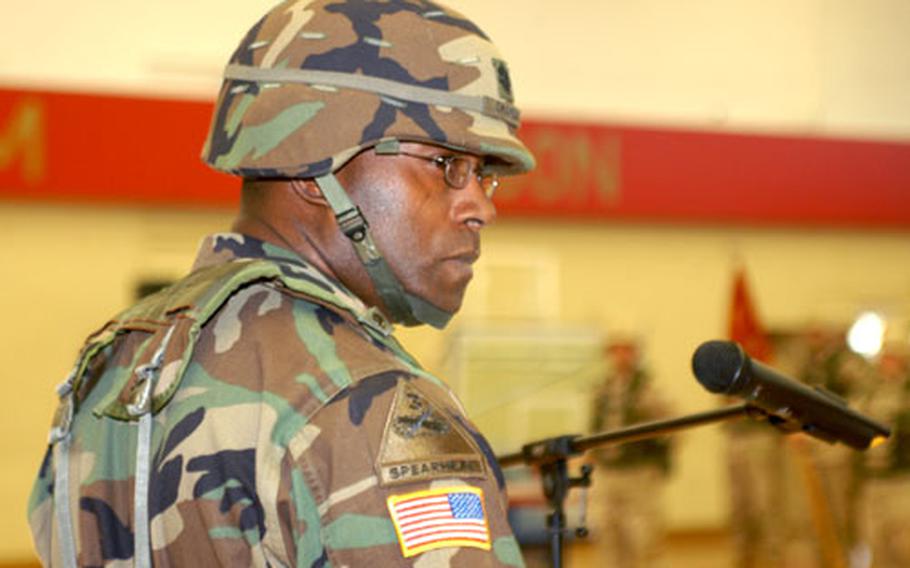 Lt. Col. Tony Chambers, commander, 181st Transportation Battalion, speaks Wednesday at a deployment ceremony on Sullivan Barracks in Mannheim, Germany. The three companies leaving from the battalion will not go until after the New Year. (Jessica Inigo / S&S)

MANNHEIM, Germany &#8212; Three companies within the 3rd Corps Support Command gave their battalion commander a crisp salute and sounded off with a &#8220;deployment ready&#8221; during a ceremony on Sullivan Barracks Wednesday.

The companies, which all fall under the 181st Transportation Battalion out of Turley Barracks in Mannheim, will deploy in support of Operation Iraq Freedom 3 for the second time.

Though each company does different jobs, such as transporting supplies, fuel or heavy equipment within the battalion, each will conduct tactical transportation missions, as well as transport all classes of supply and oversized equipment when deployed.

&#8220;Your selfless service is a model for all to follow,&#8221; Chambers said to the three companies from the podium.

After the ceremony, Chambers said family members are vital to troops being great warfighters and he commended them for &#8220;coming out in full force&#8221; to support their soldiers.

Chambers also said he is full of pride for the unwavering troops who are prepared to face the dangers of another Iraq deployment. During Operation Iraqi Freedom 1, he said, about 70 percent of his troops faced danger and were attacked on 72 separate occasions. Yet, Chambers said he stood behind his leadership to get the soldiers back safe and sound.

&#8220;Commanders, first sergeants, platoon leaders, and platoon sergeants, that trust is yours. Now is the time to put your talents to the test,&#8221; Chambers said during the ceremony.

One of those leaders, Sgt. William Nowlin, a squad leader in the maintenance platoon, who was extended in June to deploy with his unit again, said despite the fact that he wasn&#8217;t able to go home, he&#8217;s still deployment ready and prepared to lead his troops.

The transportation companies are just three out of 14 V Corps companies scheduled to deploy to Iraq this coming year, according to a U.S. Army Europe press release issued in August.