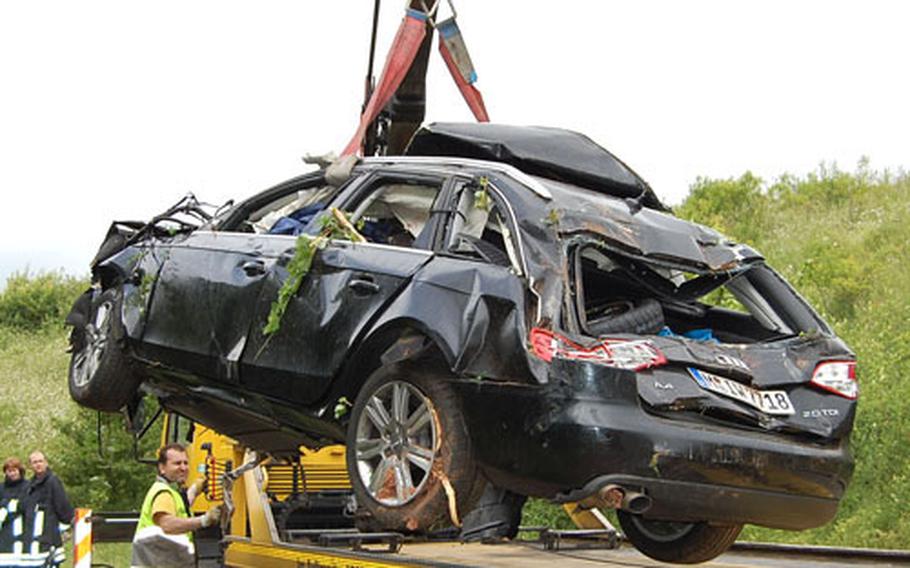 BAUMHOLDER, Germany &#8212; Three Baumholder-based soldiers killed in an early morning crash Sunday on an autobahn north of Kaiserslautern had returned recently from Iraq. German police belive the accident might have involved alcohol &#8212; a worrisome problem for Army officials concerned about the welfare of soldiers returning from war zones.

Two other soldiers were injured in the crash, and all five were assigned to the 2nd Brigade Combat Team, 1st Armored Division, which has been holding ceremonies in the past few weeks to welcome home its troops following a 15-month deployment.

About 12 percent of active-duty soldiers report alcohol-related problems in a post-deployment health reassessment screening, according to a recent study published in the Journal of the American Medical Association. And soldiers are warned of the dangers of substance abuse as soon as they return from downrange.

Those warnings are given during the soldiers&#8217; reintegration program, a seven-day series of briefings designed to prepare soldiers for life after combat deployments.

Four of the soldiers involved, assigned to the 47th Forward Support Battalion, had arrived at the base in the past week and were still undergoing that reintegration process, said Bianca Bowen, director of plans, training, mobilization and security in Baumholder.

They would have been instructed on the dangers of substance abuse and drunken driving just two days before the accident, she said.

The five male soldiers were traveling toward Kaiserslautern early Sunday in a rented Audi station wagon when the car drove off the side of Autobahn 63, causing the vehicle to flip and eject everyone, Bungert said. The exact time of the accident is unknown but the soldiers were discovered by a German hunter around 7 a.m., she said.

The five soldiers involved in the crash range in age from 22 to 29, Bungert said. The 29-year-old driver was seriously injured. The survivors are being treated at German hospitals in Mainz and Ludwigshafen, Bungert said.

The names of the deceased are being withheld pending next-of-kin notification.

The crash occurred off the southbound lanes of Autobahn 63 near G&#246;llheim, which is between Mainz and Kaiserslautern. Police believe the driver fell asleep at the wheel.

A photo from the German autobahn police shows a chalk outline of tire tracks gradually veering off the autobahn and into roadside brush. A guardrail begins just after the point the vehicle left the road, police photos show. Once the vehicle left the road, it drove through the brush and struck the entry of a tunnel built for pedestrians to cross under the autobahn, Bungert said.

During the reintegration process, soldiers are neither prohibited from drinking alcohol nor kept from driving their cars if they have a valid license and their vehicles passed inspection.

During the reintegration briefing given this week in Baumholder, soldiers are shown a slide that states the number of alcohol-related incidents has increased for soldiers returning home from combat zones. One slide says that since Sept. 11, 2001, the Army has had a 7 percent increase in problem drinkers, according to the Reintegration Unit Risk Inventory Survey Data.

Most soldiers, though, prefer to imbibe in downtown Baumholder where they can walk to the bars, Bowen said, and several patrols can pick them up there and return them to the base.

She said she believed the soldiers involved in the crash were returning from a concert to undergo afternoon dental exams as part of reintegration.

Several soldiers gathered outside the headquarters for the 47th FSB on Monday afternoon.

Units from the 2nd Brigade Combat Team started deploying from Baumholder in early 2008. Most returned in May, with 12 soldiers lost during the deployment.