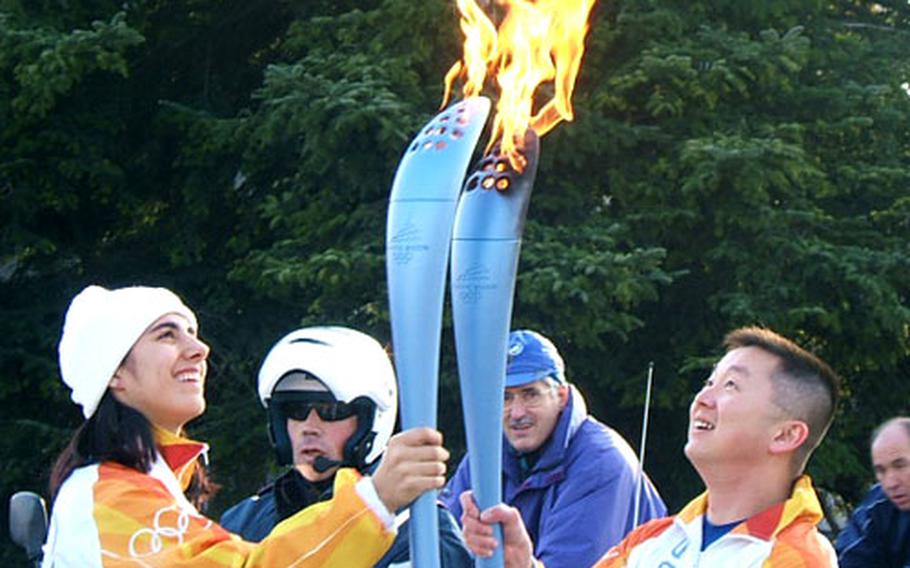 Tech. Sgt. Rick Chang, assigned to Aviano Air Base, Italy, lights the torch of another runner during the running of the Olympic torch in Sacile, Italy, on Sunday. Chang, along with two other Americans with ties to the base, got a chance to carry the torch over the weekend. (Special to Stars and Stripes)

AVIANO AIR BASE, Italy &#8212; The Olympic torch relay passed nearby last weekend, with three Americans helping it along.

Tech. Sgt. Rick Chang, Master Sgt. Mary Mattern and retired Army Lt. Col. Jim Sajo each got to carry the flame for short stints as the relay passed through cities southwest of the base. Their three stints were on the SS-13 after the torch had passed through Sacile on the way to Fontanafredda.

&#8220;All along the way, there were scattered groups of people,&#8221; said Chang, the first of the American trio to carry the torch Sunday afternoon.

Mattern said even though there wasn&#8217;t a solid wall of people for the 500 yards or so she ran, she never felt like she was running alone. That&#8217;s because a media truck trolled along right in front of her and she had an escort running alongside as well.

None of the three did drop their torches. It&#8217;s not like they had a lot of time to rehearse, though. Chang, a member of the 31st Aerospace Medical Squadron, found out Friday he would be participating. Mattern and Sajo each found out on Saturday.

Like most of the other 10,000 participants across the country, they were required to submit a short essay on why they should be torchbearers. Chang and Sato each did so months in advance. Mattern, who joined the 510th Fighter Squadron in Aviano in November, applied late in the game. She said she applied online while looking for information on how to get a T-shirt for her father.

Sajo, whose wife, Susan, teaches at Aviano Elementary School, plans to spend about three weeks in Turin and attend the Olympics. He&#8217;ll have something unusual to wear if he chooses. Each of the participants in the torch relay were given the sweat pants and shirts they wore during their stints. Each was also given an opportunity to purchase the torch they carried for 330 euros. All three Americans said they chose to buy.

Sajo can be seen running around base several times a week &#8212; without a torch in his hand.

The torch relay still has a few weeks&#8217; journey ahead as it slowly makes its way to Turin for the Olympics, which start on Feb. 10.