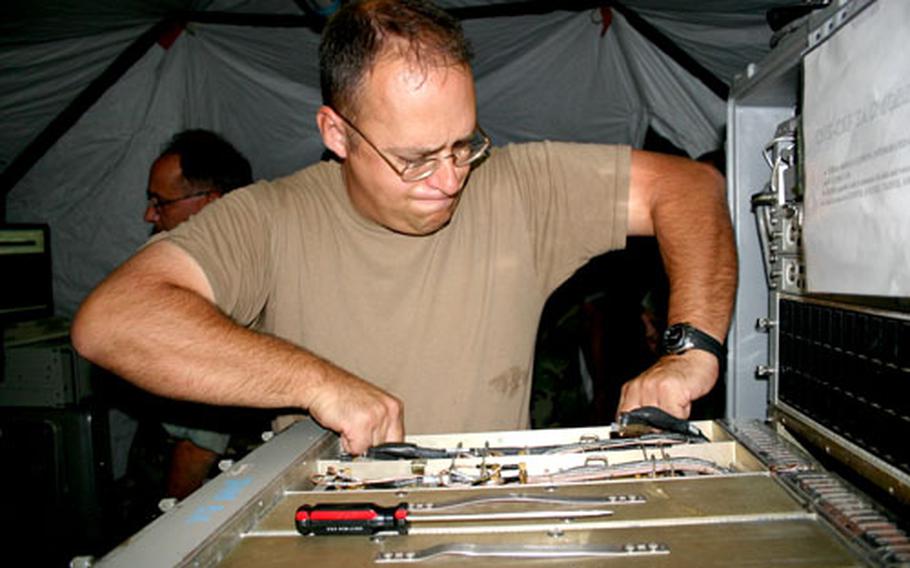 Petty Officer 1st Class Luis Scarabosio yanks out a panel in a satellite communication system in order to repair it. He is part of a new unit at Naval Air Station Sigonella, Sicily, formed by a combination of three units that did similar jobs. (Sandra Jontz / S&S)

Petty Officer 1st Class Luis Scarabosio yanks out a panel in a satellite communication system in order to repair it. He is part of a new unit at Naval Air Station Sigonella, Sicily, formed by a combination of three units that did similar jobs. (Sandra Jontz / S&S) 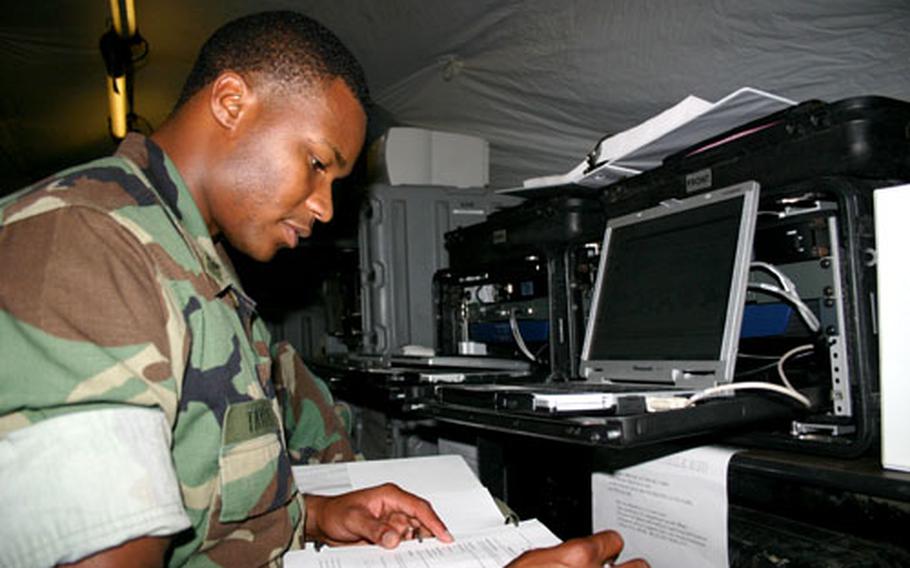 Three U.S. Navy units, each with similar communication capabilities, merged into one. The result, according to officials, eliminates redundancies and creates one unit that is faster, better and stronger in its mission to rapidly set up a command-and-control headquarters anywhere in the world.

As the Navy continues its transformation efforts to balance out support services with operational needs in the European theater, 6th Fleet leaders now have one unit of merged technicians, operators and equipment that gives the Navy the ability to rapidly &#8220;plug and fight,&#8221; said Lt. Cmdr. John Troyanos, officer in charge of the Naval Air Station Sigonella unit.

They had comparable missions but a different lineup of personnel and equipment. The single unit &#8212; which will remain at Sigonella, and is called TACMOBILE EUR &#8212; is, as the name states, both tactical and mobile. It will have 35 members and will result in a 9 percent reduction in U.S. forces at Sigonella.

Though TACMOBILE EUR is an all-U.S. Navy-made unit, its core mission is to support joint, NATO and coalition force command-and-control headquarters elements from anywhere.

&#8220;Our biggest challenge now is getting everything together so we share the same ideas.&#8221;

Unit members are in the midst of a training exercise at Sigonella, where in a dusty parking lot, they&#8217;ve erected tents, installed equipment and started working out the kinks. Next, they&#8217;ll board the USS Mount Whitney, 6th Fleet&#8217;s flagship based in Gaeta, Italy, to prove they can set up shop just as quickly at sea as they can on land, Diamond said.

The sailors have already found some kinks in the system. Petty Officer 1st Class Greg Tremblay frustratingly tried to network new, off-the-shelf computer systems with older ones, designed specifically for the Navy. He was having a hard time getting the systems to communicate, but vowed to figure it out.

Additionally, they are figuring out how to better circulate air in the tents to keep it cleaner and cooler for the sensitive equipment, and how to better position antenna in small areas, Petty Officer 1st Class Luis Scarabosio said.