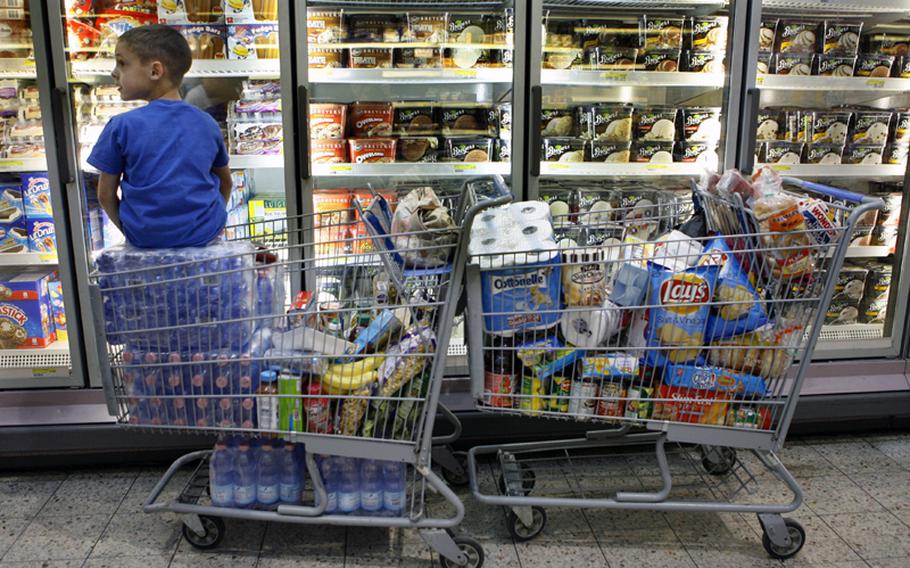 Buy Photo
Carson Maxwell sits on the extra water and groceries his mother, Air Force Mst. Sgt. Cynthia Maxwell, was purchasing at Ramstein Air Force Base commissary in Germany on Friday, April 8, 2011. People were out in force on Friday stocking up in case the commissaries close due to the government shutdown. (Laura Rauch/Stars and Stripes)

Buy Photo
Carson Maxwell sits on the extra water and groceries his mother, Air Force Mst. Sgt. Cynthia Maxwell, was purchasing at Ramstein Air Force Base commissary in Germany on Friday, April 8, 2011. People were out in force on Friday stocking up in case the commissaries close due to the government shutdown. (Laura Rauch/Stars and Stripes) 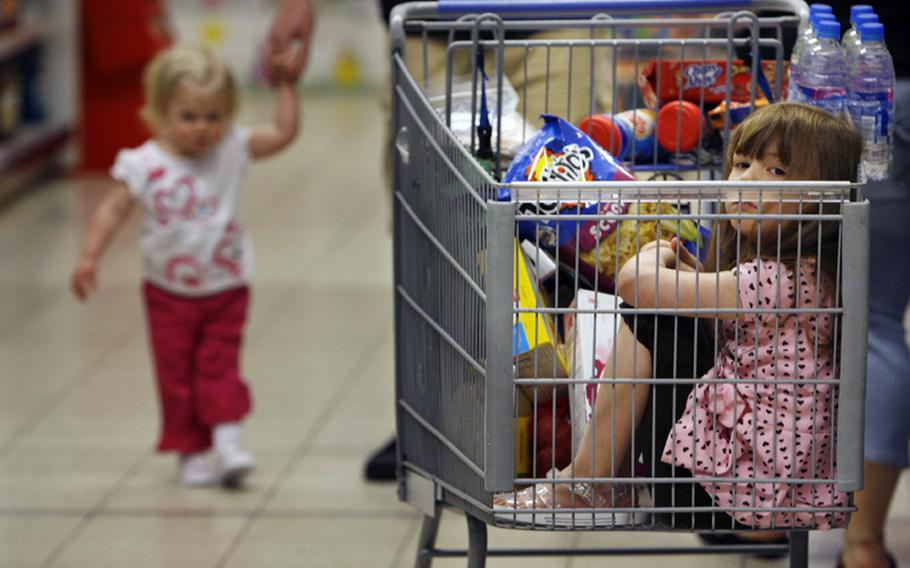 Buy Photo
Cambia Holsenback sits in a grocery cart while here parents, Army Staff Sgt. Drew Holsenback and his wife Shayla, shop for groceries at the commissary in Vogelweh, Germany on Friday, April 8, 2011. The couple, who had been on leave, decided to stock up on groceries in the event the government shutdown and the commissary was closed. (Laura Rauch/Stars and Stripes) 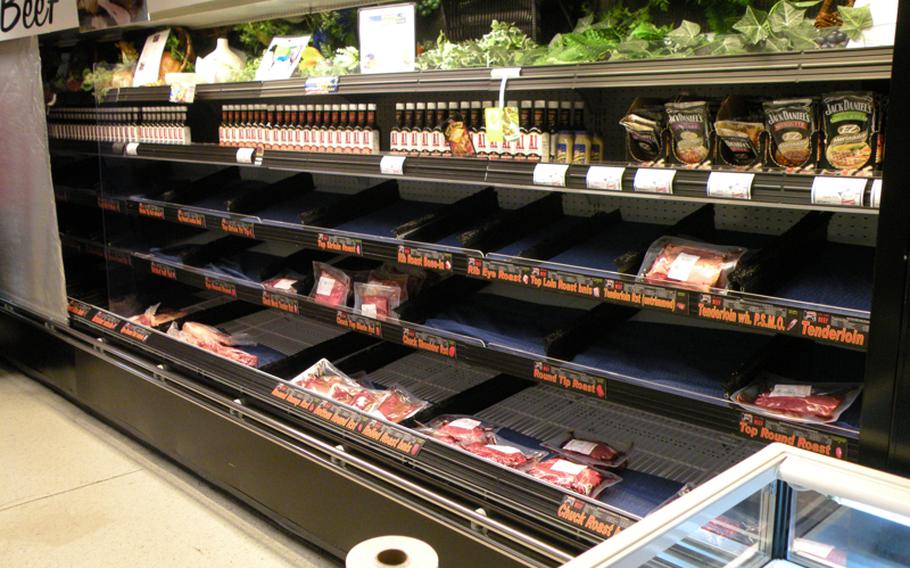 Buy Photo
The shelves at the commissary at RAF Lakenheath, England, had a few bares spots in the meat area on Friday, but for the part it remained well-stocked Friday afternoon despite reports of heavy shopping. (David Hodge/Stars and Stripes) 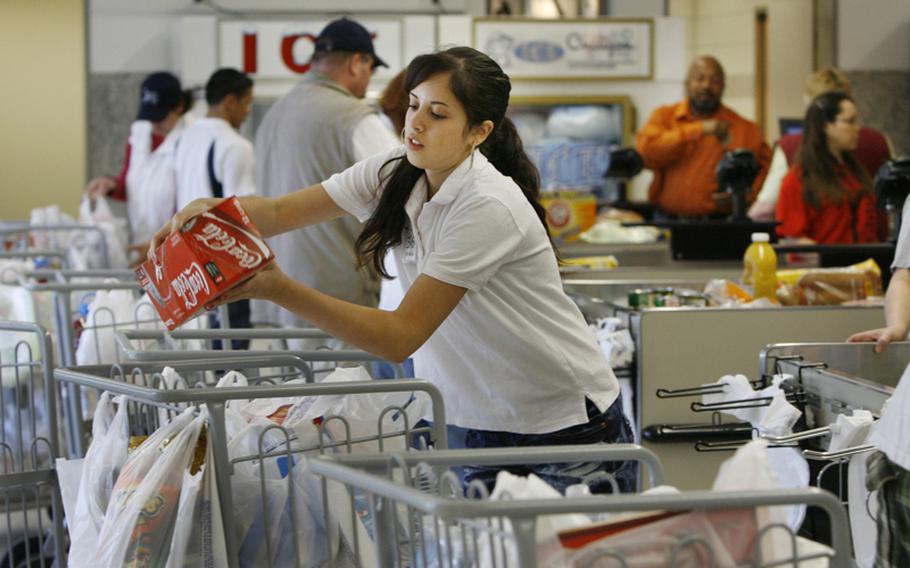 Buy Photo
Sackers load carts at the commissary in Vogelweh, Germany, on Friday. People were out in force stocking up on groceries in the event the commissaries closed due to a government shutdown. (Laura Rauch/Stars and Stripes) 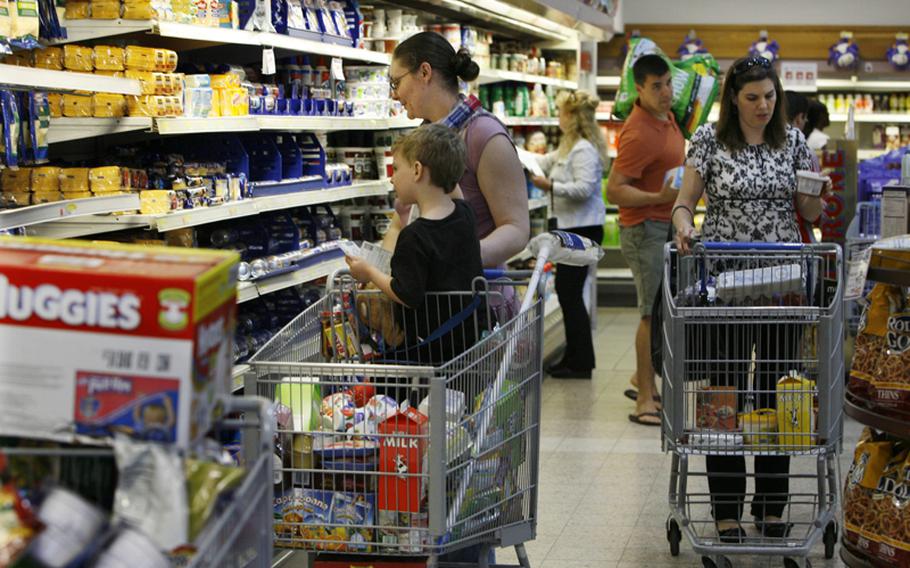 Buy Photo
Shopper fill the aisles at the commissary at Ramstein Air Base in Germany on Friday. People were out in force stocking up in case the commissaries closed due to the government shutdown. (Laura Rauch/Stars and Stripes)

KAISERSLAUTERN, Germany — Looming uncertainty over a possible government shutdown ignited a run on base commissaries Friday as servicemembers and their families stocked up on food and household goods as a precaution against the stores closing.

“I made a special trip here today just to be on the safe side,” said Melanie Zaugg while pushing her loaded cart through the commissary at Ramstein Air Base.

Shopping for her husband, Air Force Maj. Darrell Zaugg, and their six children, she had filled her cart with milk, flour, sugar, diapers and toilet paper.

“Most things are cheaper here and with the exchange rate being what it is, I didn’t want to take chances” of shopping on the economy, she said.

Bottled water, toiletries, dairy products and meat ranked among the most popular items with shoppers, who voiced frustration over the congressional budget impasse that has the federal government on the verge of going dark.

“Honestly, it’s pretty stupid to me,” said Senior Airman James Smoyer of the 786th Field Support Squadron. “…We’re over here trying to help aid the war and doing as much as we can.”

Ramstein commissary director Harry Nichols said the store had cleared $140,000 in sales by 3 p.m., nearly doubling its $80,000 take on Dec. 24, traditionally one of its busiest days of the year. Dozens of people stood in checkout lines that snaked into the aisles, and the store planned to stay open until 10 p.m., an hour later than usual.

The commissary receives shipments six days a week with a lead time of 48 hours, so shelves remained well-stocked as of midafternoon. But with Nichols expecting the crush of shoppers to intensify as the day wore on, he admitted he was nervous about keeping pace with demand and avoiding delays for shoppers.

“We’re doing everything we can to get the people out of here as fast as we can and to make sure they get everything they need,” he said.

Customers streamed in and out of the commissary at Vogelweh, and their reaction to the prospective shutdown echoed that of shoppers at Ramstein.

“I think America has forgotten we’re at war. (Politicians) address it every so often when it’s convenient,” said Jill Mulcahy, wife of Lt. Col. Robert Mulcahy of the 3rd Air Force, when asked about the effect of the budget stalemate on troops overseas. She was shopping Friday out of concern the commissary might close indefinitely.

Patricia Belcher, a bagger at the store, worried about the impact a shutdown would have on customers who use women, infants and children vouchers. “They can’t use those off-base, so where will they get groceries?” she asked.

The scene was calmer at the Yokota Air Base commissary in Fussa, Japan, where it appeared to be business as usual on Friday, with shelves fully stocked and only a handful of shoppers in the store.

“I’m not concerned at all because even if the government does shut down ... even if the commissary did need to close for a few days, the chow halls are readily available,” said Senior Airman Kayla Smith of the 374th Maintenance Squadron.