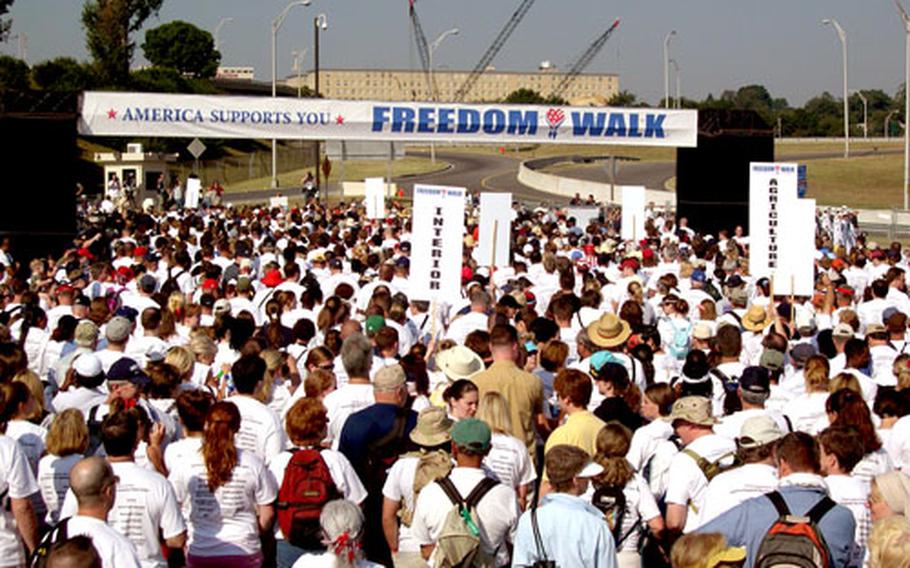 Participants in Sunday’s Freedom Walk, designed to commemorate the Sept. 11 attacks and show support for overseas military, begin the two-mile march from the Pentagon to the National Mall. More than 13,000 people registered for the event, according to Pentagon officials. (Leo Shane III / S&S)

Participants in Sunday’s Freedom Walk, designed to commemorate the Sept. 11 attacks and show support for overseas military, begin the two-mile march from the Pentagon to the National Mall. More than 13,000 people registered for the event, according to Pentagon officials. (Leo Shane III / S&S) 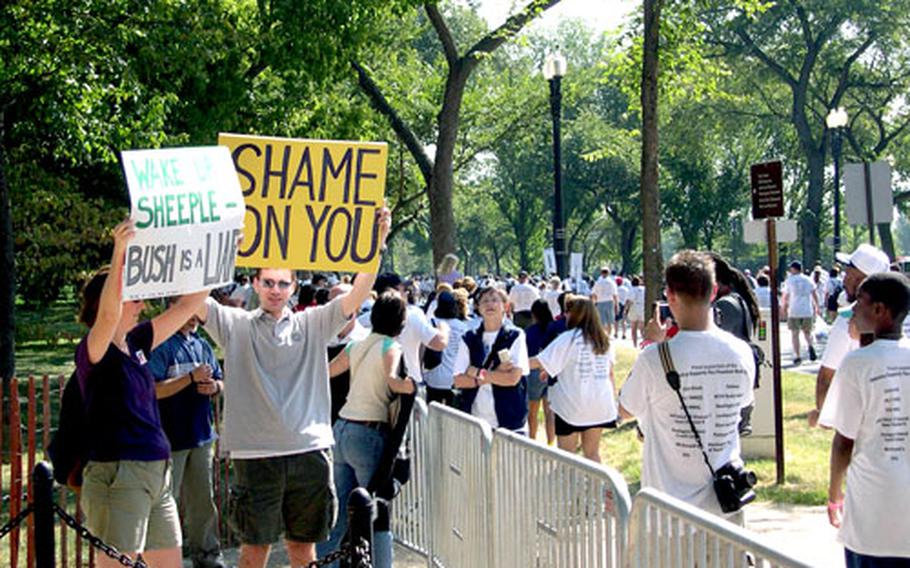 WASHINGTON &#8212; Thousands of marchers, led by families of victims killed in the Sept. 11 attacks, navigated a tightly secured route into Washington on Sunday to commemorate that tragedy and show support for troops overseas.

More than 13,000 people registered for the Freedom Walk sponsored by the Department of Defense, according to Pentagon spokesman Jim Turner. Police fenced off a two-mile path from the Pentagon to the National Mall for the marchers, and kept media and protesters off the route for safety reasons.

A group of several hundred protesters jeered the event as the marchers reached the end of the route; U.S. Park Police prevented media from approaching or speaking with the main group of dissidents.

One man holding a &#8220;Shame on You&#8221; sign in a smaller protest section was doused with water and curses from the marchers, despite being surrounded by police.

At the Pentagon, the start of the march, the mood was decidedly different, with bands playing upbeat tunes for the waiting crowd and families touring the temporary Sept. 11 memorial inside the building.

Dave Benson, a former employee at the Naval Academy in Annapolis, was choked up after touring the site. He said he already had fragile emotions before the day began because the event reminded him of the sailors he knows serving overseas.

Bennie Howard, a sailor who fought in the Vietnam war, said the event was a chance to re-emphasize respect for the military to his two children, 9-year-old Virgilia and 5-year-old Bennie Jr.

&#8220;I spent 23 years in the military, and I still work for the federal government, so my children know respect for their country,&#8221; he said.

While signs and banners were forbidden from the march, Indiana native Avery Volant walked around the Pentagon lot freely with a shirt reading &#8220;Democracy is not a spectator sport.&#8221;

He and his friends said they opposed military actions overseas, but were at the event to &#8220;try to get an understanding of the other side&#8221; and talk to marchers about their differences.

Pentagon officials led the crowd in a moment of silence before the event began. Defense Secretary Donald Rumsfeld participated in a wreath-laying ceremony with families of victims at Arlington National Cemetery before they joined the march.

Participants were treated to a concert featuring Clint Black at the end of the walk, with the crowd taking over nearly the entire west end of the National Mall.

The event had generated controversy even before it began. Critics blasted defense officials for requiring all participants to pre-register for the event, saying it contradicted the event&#8217;s spirit of freedom; and the Washington Post withdrew its sponsorship of the march after staff and readers charged the memorial event was being used to make a political statement on behalf of the administration.