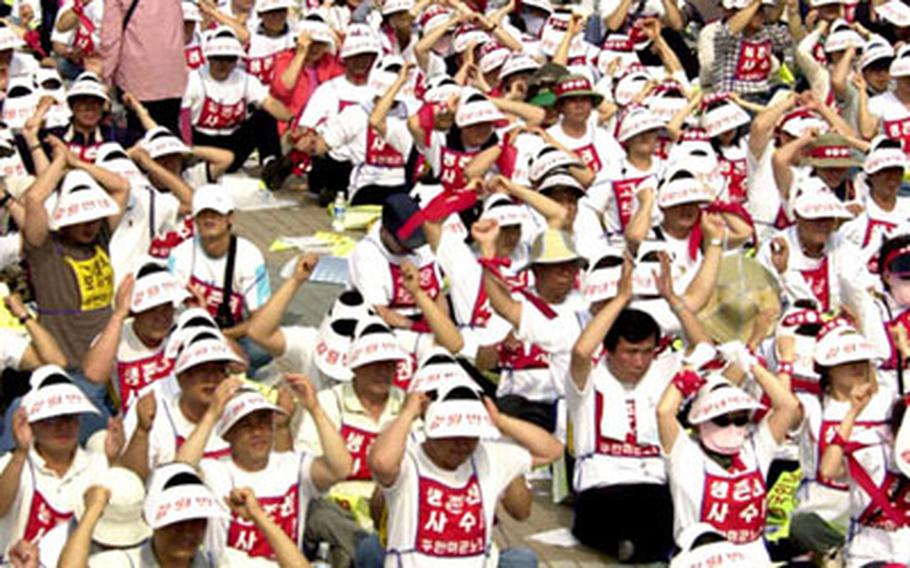 South Koreans at the protest of the U.S. Forces Korea’s announcement of job cuts vent their frustration over the proposed agreement between South Korea and USFK. (T.D. Flack / S&S)

South Koreans at the protest of the U.S. Forces Korea’s announcement of job cuts vent their frustration over the proposed agreement between South Korea and USFK. (T.D. Flack / S&S) 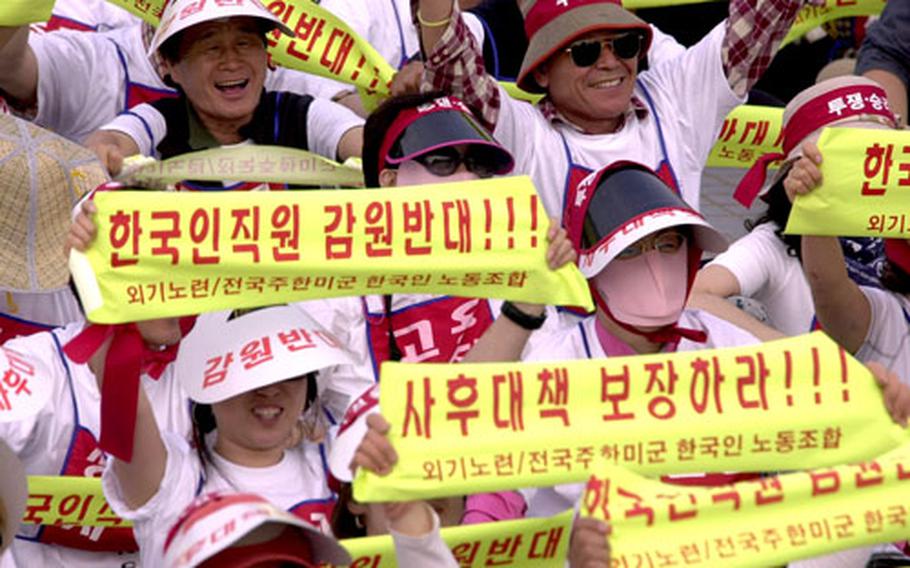 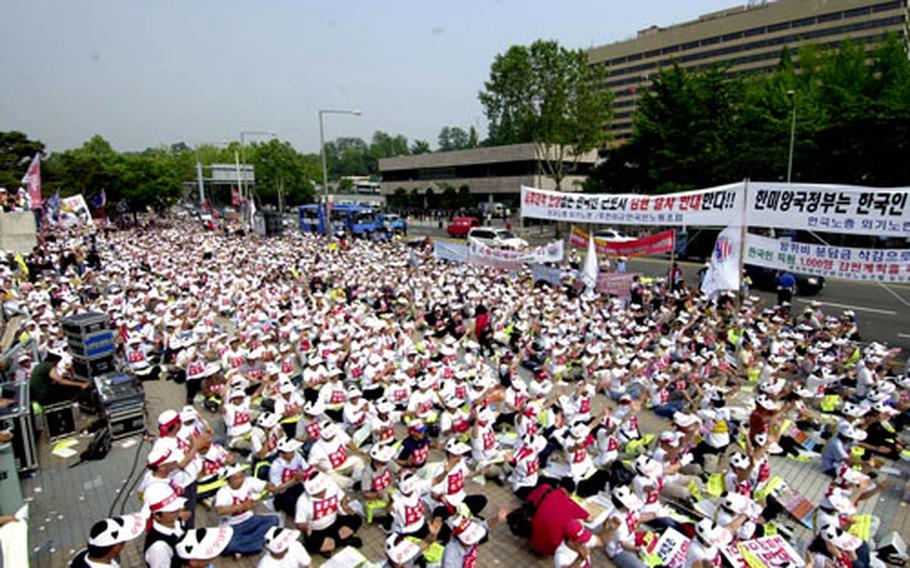 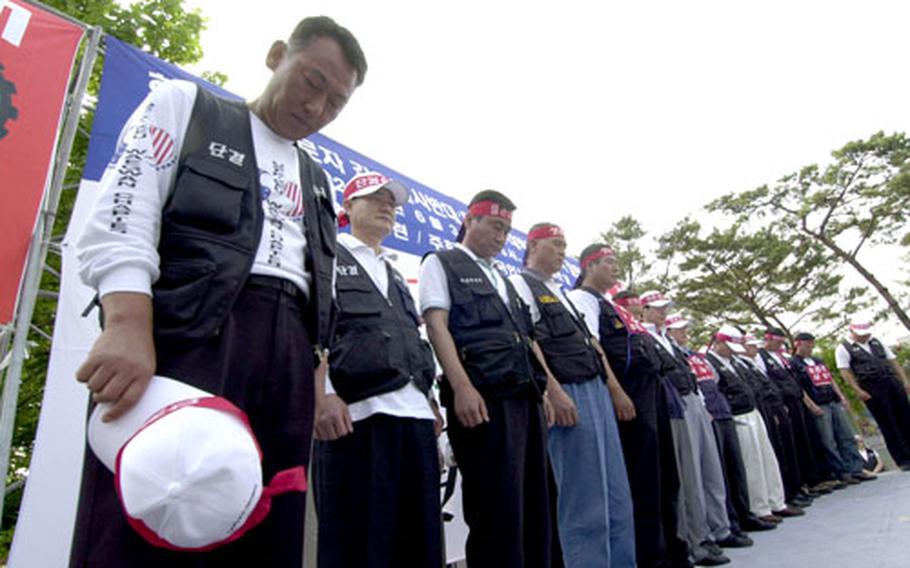 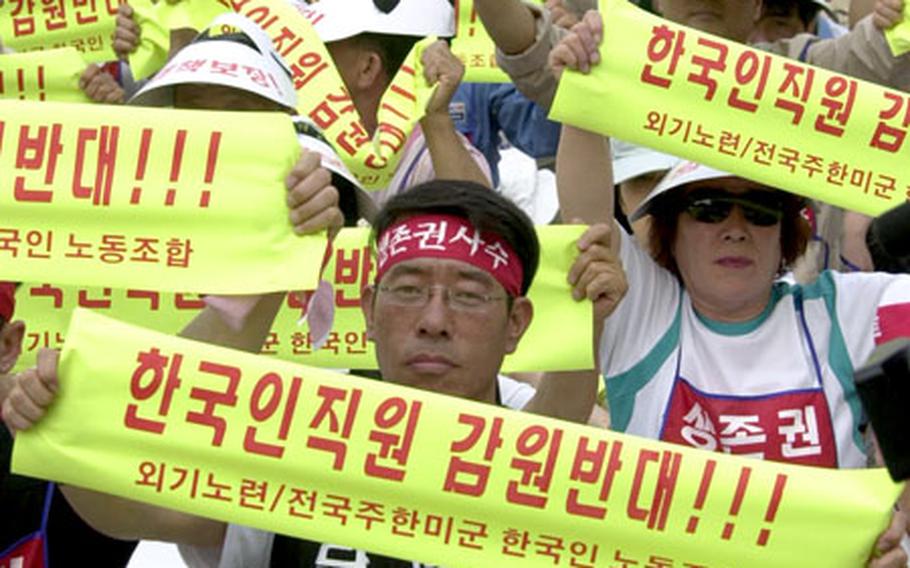 Almost 90 percent of the 13,000-member Korean Employees Union (KEU) voted a month ago to stage protests in response to a U.S. Forces Korea announcement that it would cut as many as 1,000 jobs because South Korea reduced the amount of money it pays to help base U.S. troops on the peninsula. Officials from the two countries signed a two-year agreement in late April that requires South Korea to pay 680.4 billion won (about $680 million) annually, an 8.9 percent drop from last year&#8217;s 746.9 billion won payment.

And on May 20, the U.S. Air Force announced the first cuts: 112 workers from Osan and Kunsan air bases.

Arbitration official Park Mun-hong said his division acts as a mediator and will host both USFK and union officials on June 17 for negotiations. The union can strike in early July, 45 days after submitting the dispute package, Park said.

&#8220;We will focus our efforts on attempting to minimize the potential impact on readiness created by the funding shortfall,&#8221; the statement read. &#8220;USFK&#8217;s commitment to the security of the Republic of Korea remains strong.&#8221;

USFK officials didn&#8217;t answer questions on what kind of impact the protest rally had on base service Friday; many employees took the day off to travel from outlying bases, union officials said. USFK officials also would not comment on the June 17 meeting.

The union employees crowded the sidewalk and spilled into the street between the War Memorial of Korea and the Ministry of National Defense during Friday&#8217;s rally.

Union president Kang In-shik stirred emotion by leading chants in hopes that the &#8220;Korean government and USFK&#8221; would hear their pleas.

Kang told Stripes he viewed the protest as successful.

He said union members wanted to urge the United States and South Korea to discuss and establish a plan for taking care of the employees if they do lose their jobs.

Korean National Police officials deployed about 2,300 riot police but said no arrests or violence were reported.

Protest warnings were broadcast on American Forces Network radio during the week and the issue was discussed during a call-in radio show Friday morning.

Area II Command Sgt. Maj. Kevin Witt told soldiers not to try to get near the protest or take photos.

According to the AFN broadcast, gates 5, 7, 8 and 10 were closed and Gate 3 was open to outgoing traffic only and other gates were subject to closure.

Kang Ho-chan, a Camp Market employee, said he&#8217;s worried that the proposal to cut 1,000 jobs won&#8217;t be the end of the problems for base employees based on the number of U.S. troops who are withdrawing from South Korea.

Kim Kyung-min, of Camp Hialeah, said recent news that his camp will close by August 2006 intensified his stress.

Under terms of the military alliance between South Korea and the United States, South Korea shares the cost of keeping U.S. forces on the peninsula. The United States has called on South Korea to boost its contribution and make it more in keeping with what other nations pay toward stationing of U.S. troops. Japan, for example, pays about 75 percent of U.S. military costs there.

But South Korean officials have said they wanted their costs frozen or cut this year. They cite U.S. plans to gradually cut its Korea troop strength by a third. And South Korea has said it should pay less because of other contributions it makes, including the 3,600 troops it has deployed in Iraq.