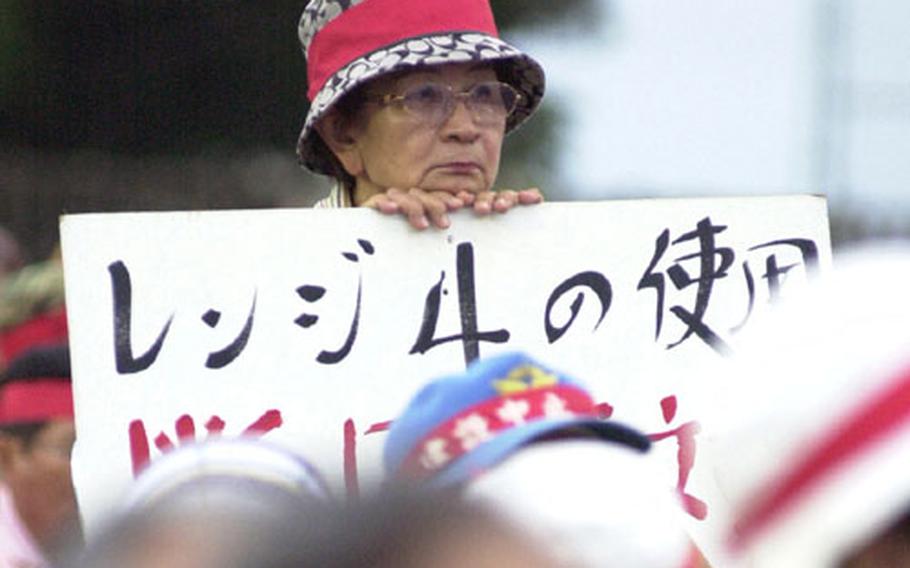 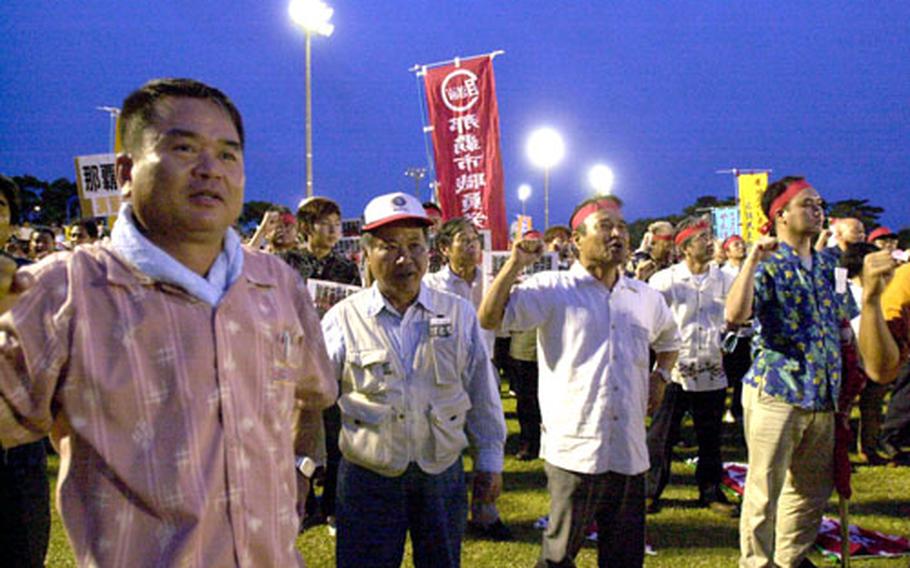 Okinawans chant in unison, asking all training be stopped at the U.S. Army&#39;s Range 4 on Camp Hansen. (Fred Zimmerman / S&S) 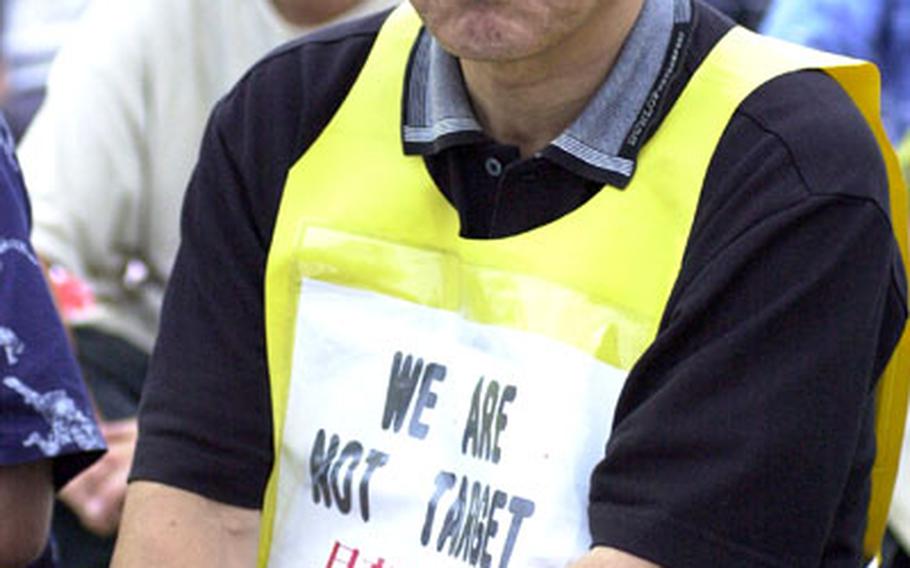 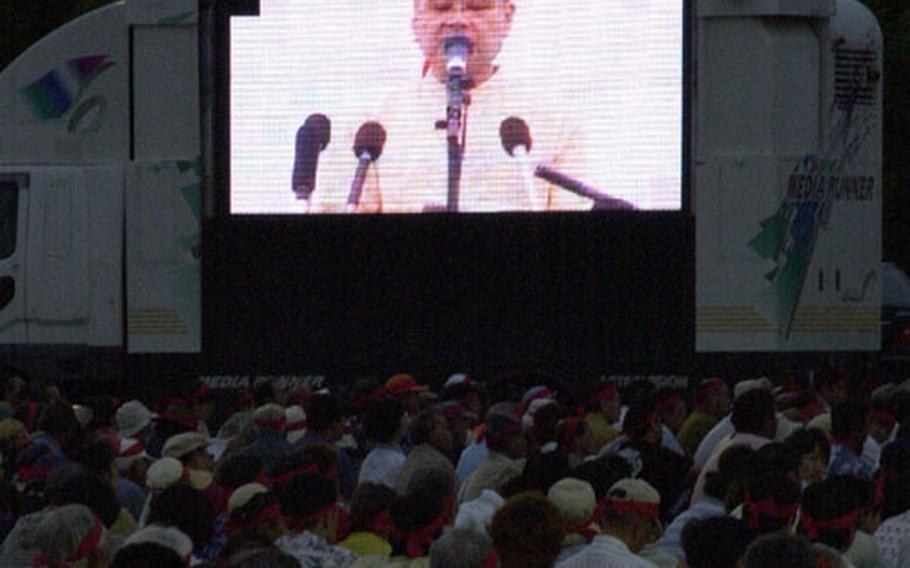 Okinawa Governor Keiichi Inamine&#39;s speech is broadcast on a giant screen during a Tuesday protest against Range 4. (Fred Zimmerman / S&S) 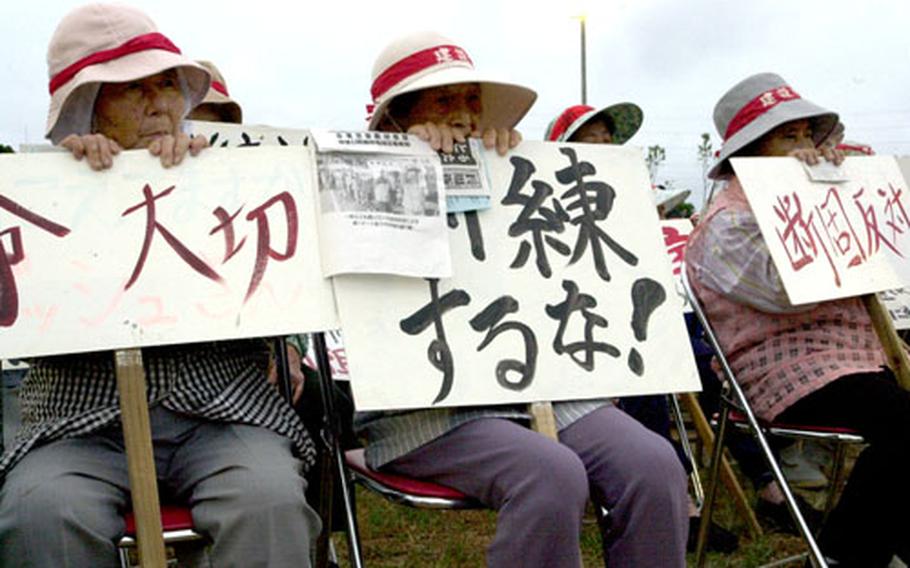 Okinawan women hold signs of protest calling for all training on the U.S. Army&#39;s Range 4 on Camp Hansen to stop. (Fred Zimmerman / S&S)

KIN, Okinawa &#8212; Okinawa&#8217;s governor made a rare appearance at a protest rally Tuesday evening, joining about 9,500 Okinawans to demand that U.S. Army Special Forces training on Camp Hansen cease at once.

Gov. Keiichi Inamine told the banner-carrying protestors gathered in a park near the Marine Corps base, that he&#8217;s indignant about the military beginning the training on Range 4. The new training complex there is too close to a residential area and the Okinawa Expressway, the governor said.

The evening rally marked the first time since 1995 that a governor attended such a protest. Then, Okinawa residents were outraged that three U.S. servicemembers had raped a schoolgirl.

&#8220;The training began by ignoring voices of Igei residents and people of Okinawa,&#8221; Inamine said Tuesday, voicing concerns about stray bullets. &#8220;I will make every effort to stop the training at the urban warfare training facility.&#8221;

&#8220;U.S. forces in Japan will continue to conduct mission-essential training to meet Japan-U.S. Security Treaty obligations in a safe, effective and efficient manner,&#8221; he said in an e-mail response to a query. &#8220;The Army Training Range facility is essential to assuring that our forces receive the necessary training to meet our obligations to assist in the defense of Japan and to help provide stability in the region.&#8221;

Japanese officials have said they plan to relocate the training facility further from residential areas surrounding Camp Hansen but until that new facility is complete, the current Range 4 will be used.

Small arms &#8212; pistols and rifles &#8212; are used at the range, Warzinski has stated. Among many safety measures at the new facility, officials have said, are rubber bullet traps to keep bullets inside a &#8220;shoot house&#8221; and requiring numerous safety personnel to be present any time the range is used. Also, outdoor shooting will be directed away from residential areas.

Because &#8220;every precaution will be taken in training, and due consideration will be paid to local concerns,&#8221; Warzinski has stated, the Japanese government &#8220;does not consider the training to be conducted by the U.S. forces at Range 4 to be a safety risk for local residents.&#8221;

But most of those at Tuesday&#8217;s protest indicated they disagreed. Resident Yoshi Iha, who represented a women&#8217;s group in Igei community, said, &#8220;I was filled with resentment and then sorrow when I first heard the shooting. &#8230; Prime Minister Koizumi, if you are so sure about safety of the training, why don&#8217;t you have the facility in your hometown?&#8221;

At the end of the rally, the protesters unanimously agreed to demand the training facility be immediately closed and that all portions of Camp Hansen within Igei community limits be closed.

Organizers said the demand was to be delivered Wednesday to USFJ, the U.S. ambassador to Japan and Japanese government officials including Koizumi, the prime minister, the minister of foreign affairs and the Self Defense Agency director general.

After the rally, protesters marched to Camp Hansen&#8217;s main gate.

&#8220;We want the training facility be removed and if possible, the military base itself closed,&#8221; said Akemi Toyama of Igei, who joined in the rally with her children, ages 6 and 1. &#8220;When the military began the training, we could hear the noise from our home. It is very scary thinking that bullets might go astray any moment.&#8221;