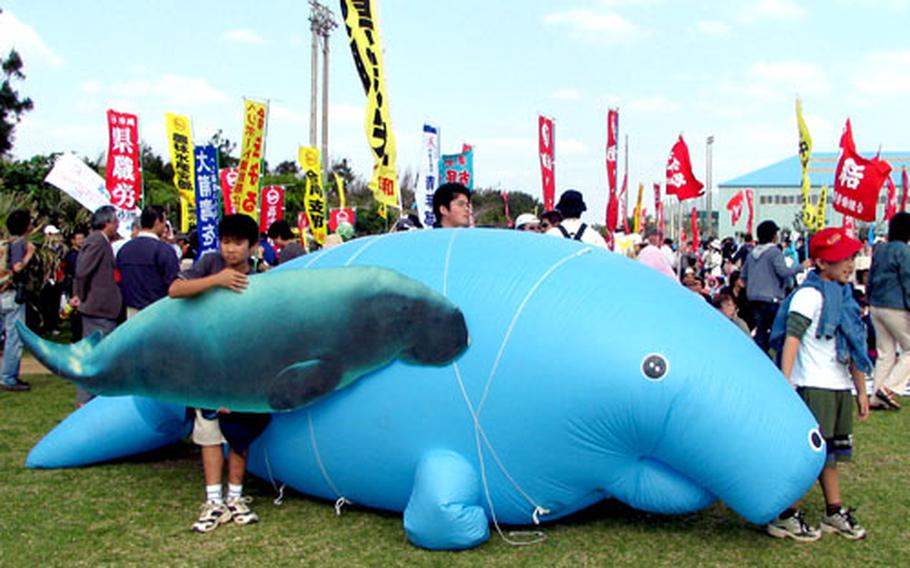 Children from Nago in northern Okinawa use a dugong ballon to make their claim that a new Marine air station proposed to be built on reclaimed land in Oura Bay at Camp Schwab in Nago would upset the feeding ground of Okinawa’s endangered saltwater manatees. (David Allen / S&S)

Children from Nago in northern Okinawa use a dugong ballon to make their claim that a new Marine air station proposed to be built on reclaimed land in Oura Bay at Camp Schwab in Nago would upset the feeding ground of Okinawa’s endangered saltwater manatees. (David Allen / S&S) 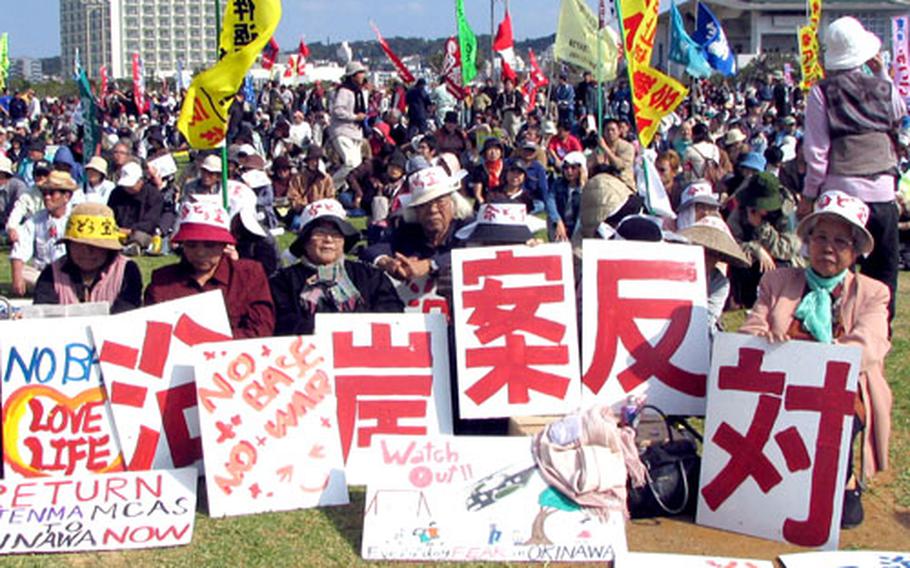 A group of women from the northeast Okinawa fishing village of Henoko were among the thousands of people attending Sunday’s rally in Ginowan. (David Allen / S&S) 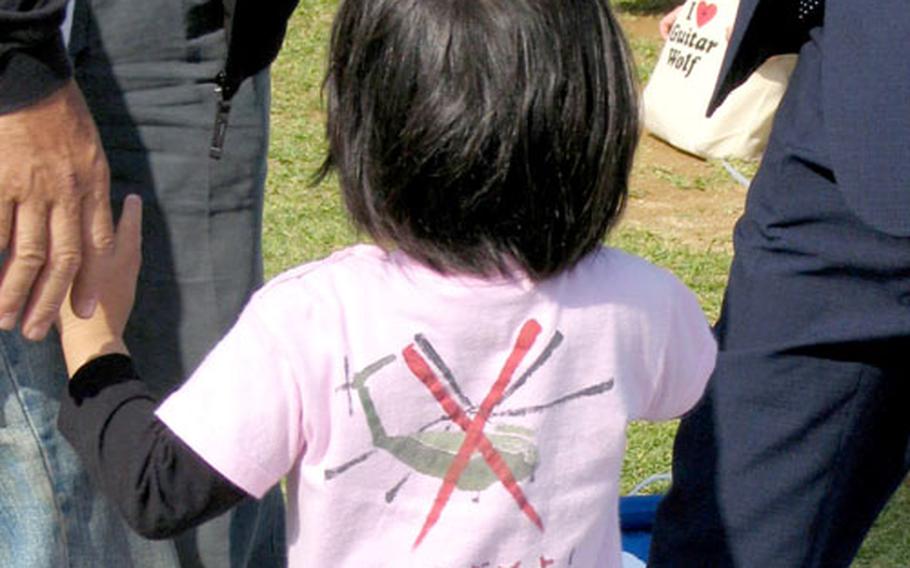 Even the smallest of Okinawans had something to say at Sunday’s rally. (David Allen / S&S)

Gathering in a field at the Ginowan Convention Center, the protesters represented labor unions, political parties, schools and community and environmental groups as well as hard-core anti-base activists.

The event was peaceful as the crowd listened to a wide range of speakers, all of whom had a similar message: Okinawans are against plans for moving MCAS Futenma to an airport to be built on part of Camp Schwab and reclaimed land in Oura Bay, even if it means rejecting an offer to move some 8,000 Marines off the island entirely.

It&#8217;s the same message Okinawa Gov. Keiichi Inamine and Nago Mayor Yoshikazu Shimabukuro gave to Defense Facilities Administration Agency Chief Iwao Kitahara on Saturday when he visited them to seek their understanding on the relocation plan.

Inamine rejected the plan as &#8220;unacceptable,&#8221; according to prefectural officials.

Shimabukuro said he would discuss the plan only if some revisions, including changing a flight path, were made to make it more acceptable to the local community.

Japan and the U.S. are to finalize by the end of March a plan to realign U.S. forces in Japan. An interim report issued in October included moving MCAS Futenma from the middle of urban Ginowan to Nago and reducing the number of Marines on Okinawa by more than half. But U.S. officials have said the transfer of some 8,000 Marines &#8212; most of them to Guam &#8212; is contingent on the move of Futenma.

Other Japanese communities are opposed to elements of the realignment proposal. The city of Iwakuni announced Sunday that it will hold a referendum March 12 concerning plans to relocate U.S. carrier-borne aircraft to MCAS Iwakuni from Naval Air Station Atsugi.

Among those attending the Ginowan rally Sunday were people from the rural communities that would be affected by the new air station.

&#8220;It is obvious that aircraft noise will affect our community,&#8221; said Reiko Toma from Matsuda community of Ginoza. The community of 1,300 people is located under the proposed airport&#8217;s flight path.

Nearby, Sadakuni China, 64, from the Tima community of Nago, sat with 15 of his neighbors.

On the stage, former vice governor Mikio Higa, one of the event&#8217;s organizers, said Tokyo was trying to force the realignment plan on Okinawa. There was concern, he said, that the national government might go as far as to enact legislation that would allow Tokyo to override the Okinawa governor&#8217;s authority over filling in shallow water for construction projects.

&#8220;A recent survey of Okinawans and comments by the governor and prefectural assembly officials, as well as other municipal officials, show that opposition to the plan is Okinawa&#8217;s consensus,&#8221; Higa said.

Later, rally organizer Tokushin Yamauchi looked out over the crowd and noted that Okinawa&#8217;s frustration with hosting more than half of the U.S. troops in Japan was about to peacefully erupt.