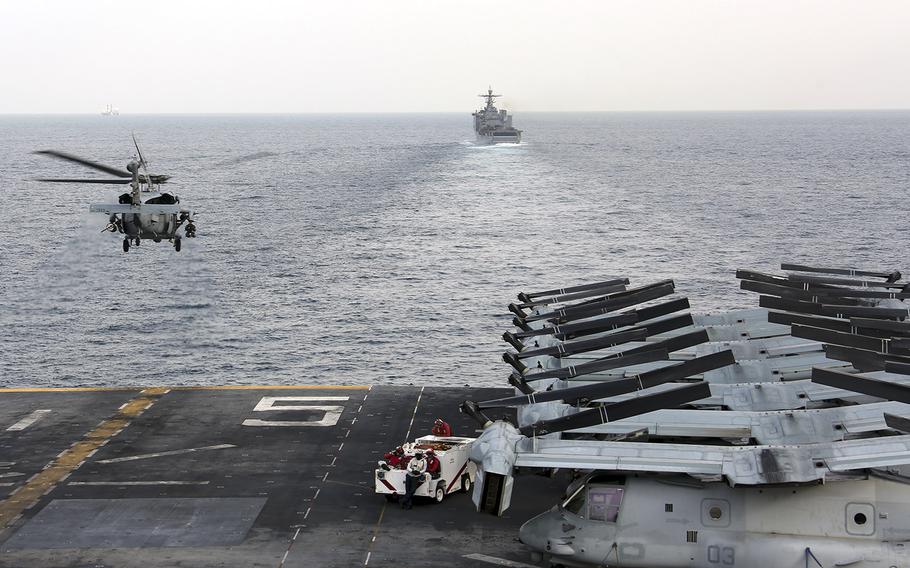 “Our passage through this important strait and continued presence in the area plays a critical role in maintaining the freedom of navigation key to regional security and stability here,” said Capt. Lance Lesher, the group’s commodore in a statement.

Also traveling with the group is the destroyer USS Carney and cargo ship USNS McLean.

The last big deck to transit the strait before the Bataan was the aircraft carrier USS Lincoln, which departed last November during its record-breaking 10-month deployment.

The 96-mile-long Strait of Hormuz is bounded to the north by Iran and to the south by Oman and the United Arab Emirates. Around a fifth of the world’s oil passes through the strategic shipping route, which is only 21 miles wide at its narrowest point.

Bataan’s passage through the strait was to “reassure allies” and ensure “stability and security essential to maritime commerce,” skipper Capt. Greg LeLand said.

“Our continued commitment to our partner nations lends to the strength of nations here in the Gulf and elsewhere in the region,” LeLand said.

The transit comes after a month of tension in the region following the January killing by the U.S. of Iranian general Qassem Soleimani and retaliatory rocket attacks on an airbase in Iraq that left more than 100 U.S. service members with traumatic brain injuries.