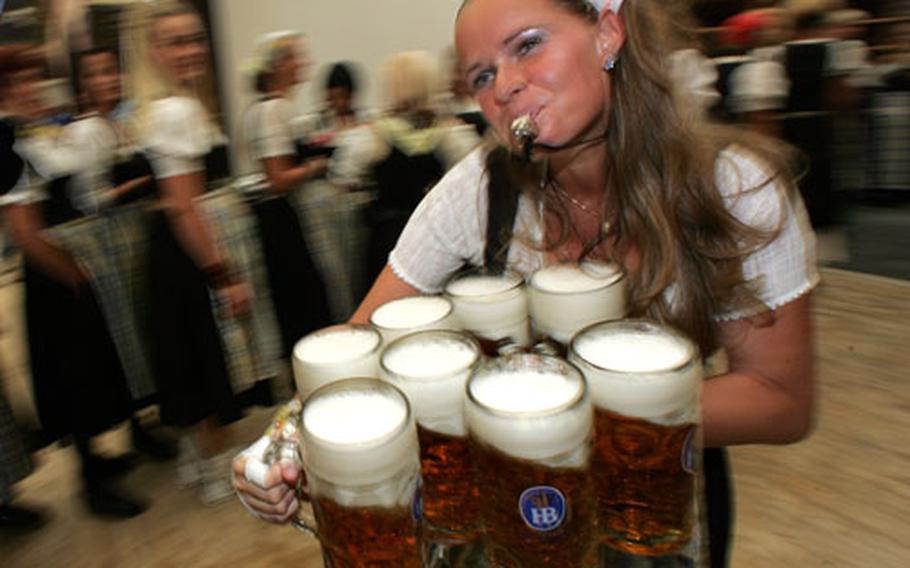 A waitress carries a load of beer mugs as she whistles her way through the crowd at the start of the Oktoberfest beer festival in Munich, Germany. The world’s biggest beer festival opened on Saturday. (Diether Endlicher / AP)

Oktoberfest 2006 tapped off at noon Saturday to a crowd of thousands. Americans, Australians, Germans, Italians and scores of other nationalities packed Munich&#8217;s Theresienwiese for the first day of food, fun and, most importantly, beer.

The early birds got the best seats on the opening day of Germany&#8217;s most famous beer festival. By 9:30 a.m. the uberpopular Hofbrau tent was packed tighter than a dirndl dress. Festgoers scrambled to get open spots before the beer could even begin flowing.

Many German men were dressed in traditional lederhosen, while the women were adorned in revealing dirndl dresses.

Just before noon, festgoers began pounding on their tables, calling for beer. As noon struck, fireworks exploded above the Theresienwiese, signalling the fest had begun with the tapping of the first keg and beer could be served.

By 12:30 p.m., slightly overcast skies gave way to sunshine, leading many in the crowd to shed jackets and down more beer.

Children and families enjoyed the festival rides that are also a big part of the annual party, while others passed out or took naps on a nearby hillside. By 3:30 p.m., the overcast skies had returned, offering welcome relief from the sun.

On hand were scores of Americans, including the self-proclaimed &#8220;USA Drinking Team.&#8221; Composed of U.S. airmen from Geilenkirchen, the Americans wore red short-sleeved T-shirts with their &#8220;team&#8221; name.

The shirts were to show everybody that they were at Oktoberfest to have a good time, said Barry Walkenbach, 21, of St. Louis.

Also present were some Americans who traveled from the States to partake in the world-renowned revelry. Landry Leidner and Emily Talbert made the trip from Florida to Munich in order to tell everyone that they had toasted the crowd at Oktoberfest.