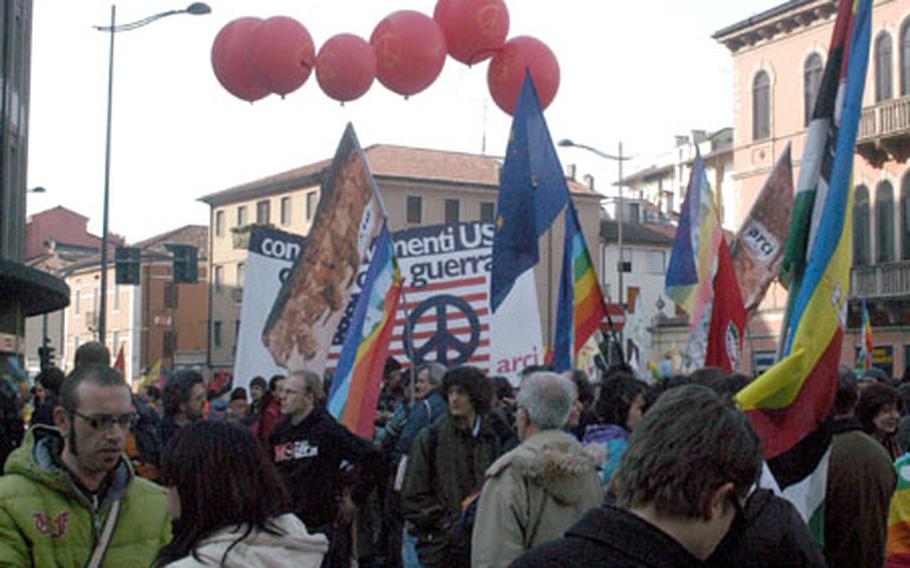 Wearing a variety of colors and carrying flags and banners with dramatic messages, a protest in Vicenza, Italy, on Saturday had the atmosphere of a large, meandering party. A large police presence helped keep problems at a minimum, at least before the sun set. (Kent Harris / S&S)

Wearing a variety of colors and carrying flags and banners with dramatic messages, a protest in Vicenza, Italy, on Saturday had the atmosphere of a large, meandering party. A large police presence helped keep problems at a minimum, at least before the sun set. (Kent Harris / S&S) Female protesters chanting "Vicenza is mine. I administer it" (in Italian) carry a sign in downtown Vicenza, Italy, before the start of a large march around the city protesting the U.S. use of the Dal Molin airfield. (Kent Harris / S&S) 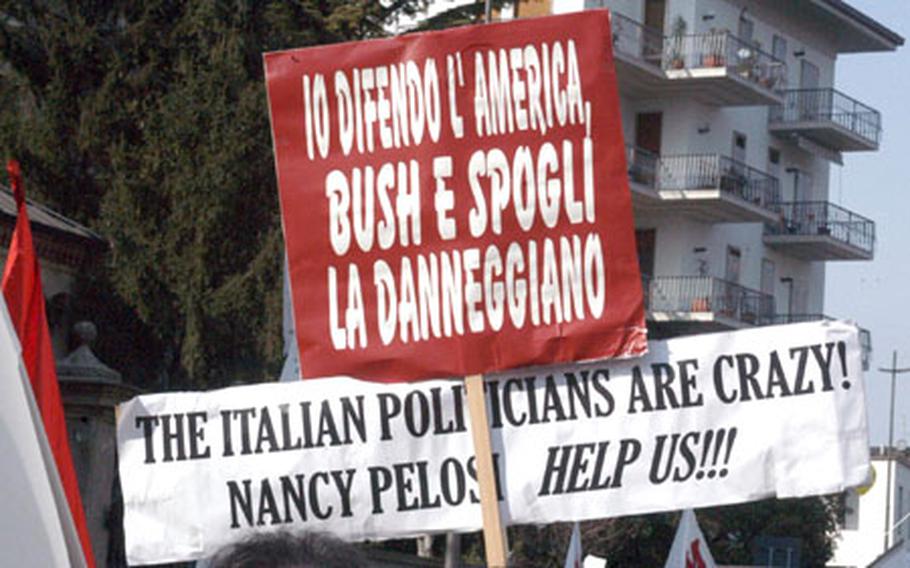 A protester holds up signs in both Italian and English during a protest Saturday in downtown Vicenza, Italy, against the expansion of the U.S. presence in the city and Italian and American foreign policies. (Kent Harris / S&S)

VICENZA, Italy &#8212; Italians gathered by the thousands Saturday to protest a larger U.S. presence in this northern Italy city and generally decry the foreign policies of U.S. and Italian governments.

Police, gathered from cities around northern Italy to face feared violence, estimated about 27,000 protesters came to Vicenza via train and bus to participate. Organizers said they had about twice that many people in the streets, and the Associated Press quoted police estimates of the total number of demonstrators at between 50,000 and 80,000.

The main impetus for the protest was the decision by Italian Prime Minister Roman Prodi to permit the United States to use the Italian air base at Dal Molin in Vicenza. Protesters planned to march around downtown in a circle that took them by the air base.

Eugenio Marchetti took an overnight train from Rome with some friends to attend. He said he was not only against the U.S. expansion in Vicenza, but also would like to see all U.S. bases around the country closed.

But the 22-year-old also complained about policies of his own government, saying that he disagreed with its foreign policies as well as several domestic ones.

Many of those protesting seemed to share the feeling, carrying signs criticizing the decision by Prodi that would allow the United States to base the entire 173rd Airborne Brigade in Vicenza. Others handed out leaflets saying the center-left government had betrayed an array of promises it made to voters before ousting Silvio Berlusconi&#8217;s center-right government last year.

Carogero Cacciato, 51, traveled with some friends from Turin. He said he was a pacifist and a member of a group that has protested against a high-speed railway connecting Italy to the rest of Europe. He said about two dozen buses from the valley where he lives came to Vicenza.

Not all protesters had to make long journeys. Laura Nardin, 22, and Paola Zocca, 21, live in the province of Vicenza. They were selling T-shirts for 10 euros and banners for 6 euros. The money, they said, would help fund a protest tent set up near Dal Molin.

Nardin said she had visited Caserma Ederle when her American neighbors took her on base. Zocca recalled a July Fourth celebration on base &#8220;once when I was very young.&#8221;

But both said they&#8217;d like to see the base close because it supports U.S. war efforts around the globe.

Questioned about the prevalent logo &#8220;No Dal Molin&#8221; that featured a red diagonal line through a jet plane, Nardin said she didn&#8217;t believe the U.S. assertion that fighter planes wouldn&#8217;t use Dal Molin.

U.S. authorities have said the airfield&#8217;s runway isn&#8217;t suited for military aircraft and that they planned to continue using Aviano Air Base as a departure point for future deployments. Multimillion dollar staging facilities are currently under construction there.

There were no signs of violence early on, though there were some reports of rocks being thrown. The city park across from the train station where the protesters gathered looked more like a large party than a riot, with several trucks filled with stereo equipment blasting music songs at each other. Some booths offered food and drinks and others books, CDs and T-shirts. One vendor wearing a multicolored Pace (peace) shirt hawked balloons.

Six police helicopters hovered overhead, watching as protesters gathered. They had the best chance at estimating the crowd numbers, because with a variety of groups coming from locations around the country, clusters of people were spread out over much of the downtown.