Thousands honor 59th anniversary of the Battle of Okinawa 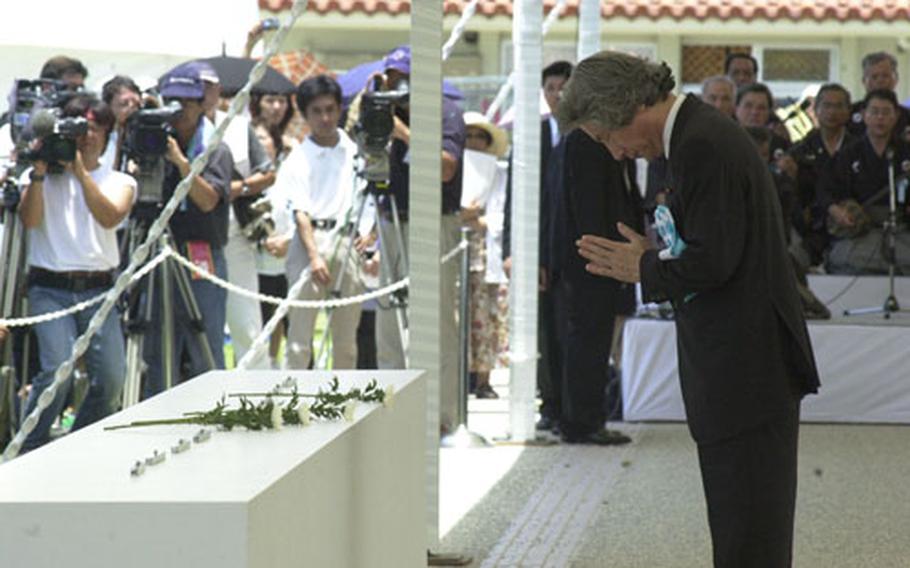 Junichiro Koizumi, the prime minister of Japan, bows in respect and says a prayer during a ceremony Wednesday at the Okinawa Memorial Peace Park in Itoman, commemorating the more than 200,000 men and women who died in the Battle of Okinawa. (Mark Rankin / S&S)

Junichiro Koizumi, the prime minister of Japan, bows in respect and says a prayer during a ceremony Wednesday at the Okinawa Memorial Peace Park in Itoman, commemorating the more than 200,000 men and women who died in the Battle of Okinawa. (Mark Rankin / S&S) 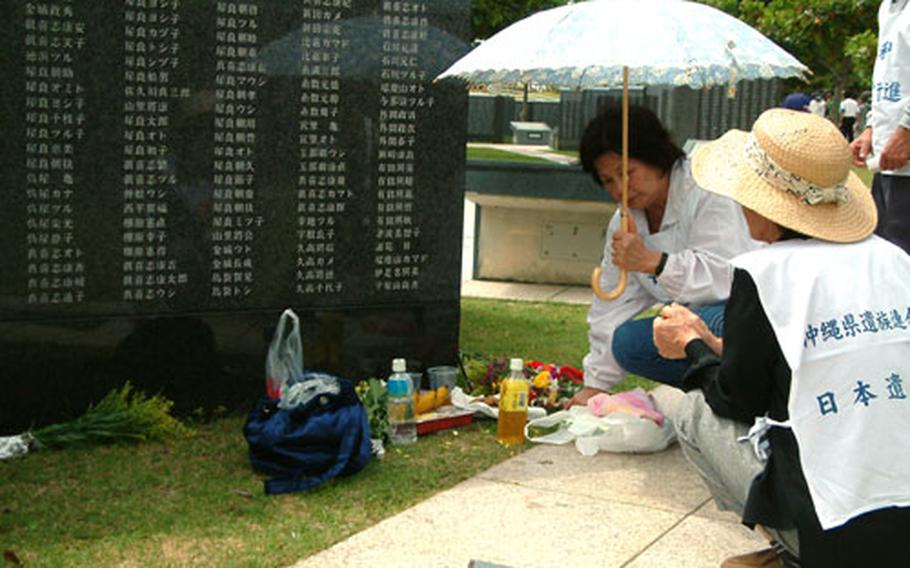 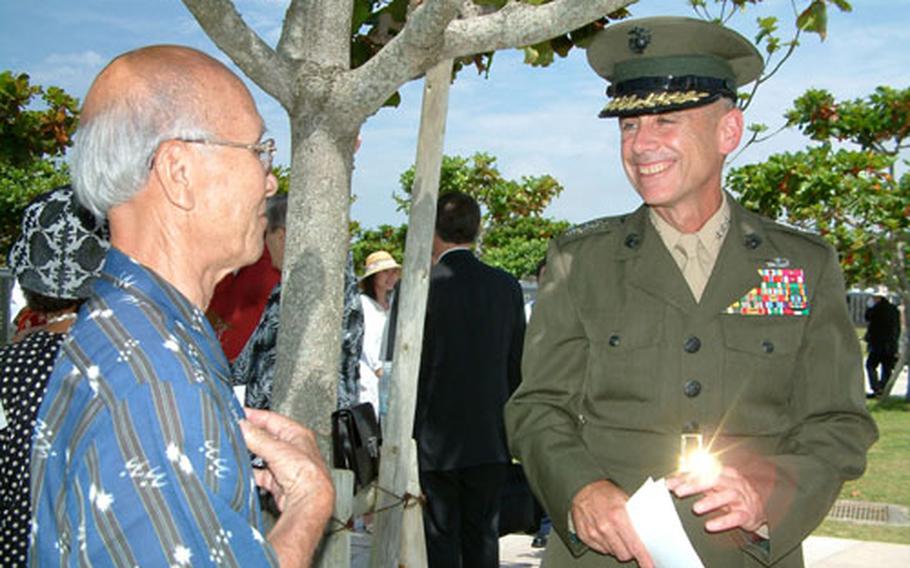 Lt. Gen. Robert R. Blackman, commander Marine Corps Bases Japan, speaks with Ralph Tsuha, 80, a Japanese-American who served as a translator with the American invasion force during the Battle of Okinawa. Tsuha and many other Nisei settled on Okinawa after the war. (David Allen / S&S) 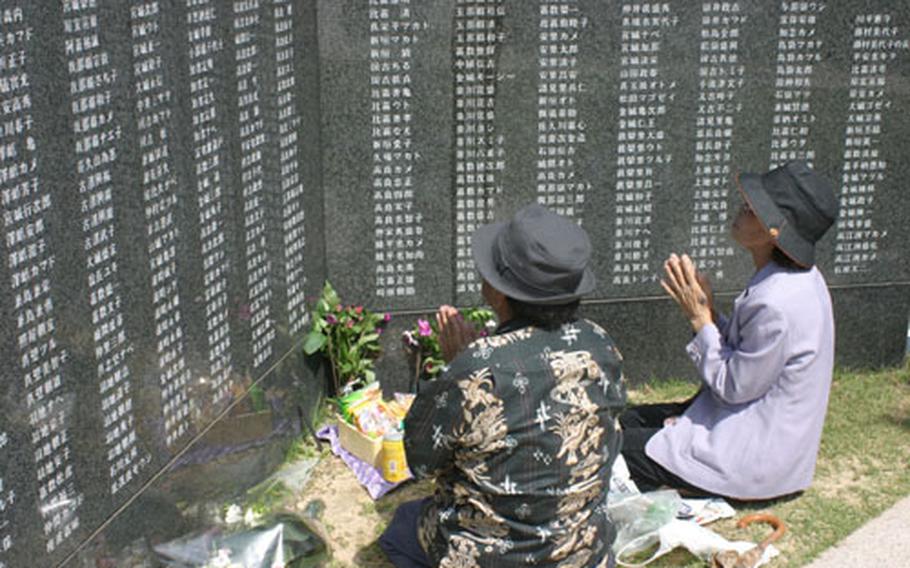 Relatives of deceased family members hold prayers at cenotaphs in the Cornerstone of Peace area at the Okinawa Peace Memorial Park in Itoman on Wednesday before a ceremony commemorating the Battle of Okinawa. More than 236,000 names of the men and women who lost their lives in that battle are inscribed on the walls. (Mark Rankin / S&S) 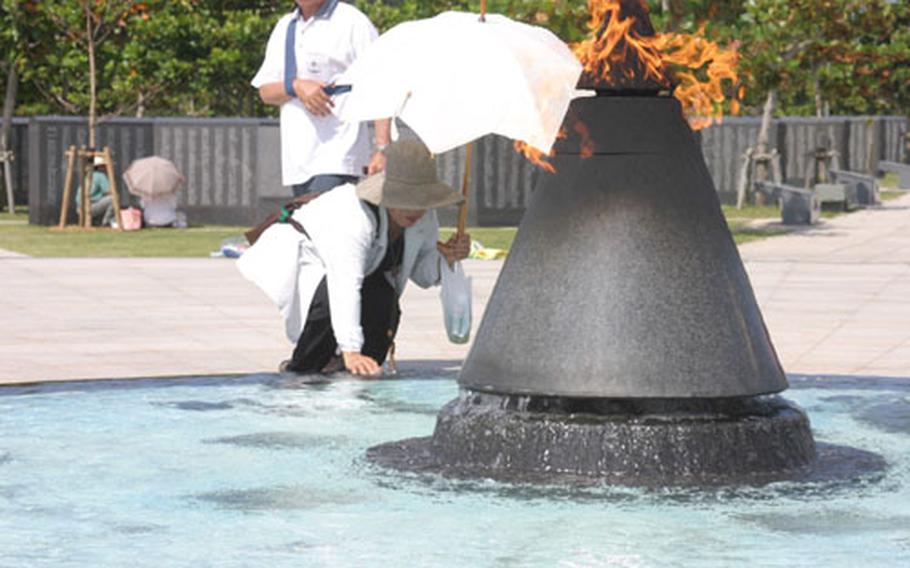 Tamie Toma, 60, visiting the Okinawa Peace Memorial Park in Itoman, dips her hand into a pool of water Wednesday at the edge of the Flame of Peace in the park&#39;s Cornerstone of Peace area. The memorial commemorates the more than 200,000 lives lost in the Battle of Okinawa. The Flame of Peace burns continually. (Mark Rankin / S&S)

ITOMAN, Okinawa &#8212; More than 10,000 people braved a sizzling hot sun Wednesday to crowd into Peace Prayer Park for a ceremony marking the 59th anniversary of the end of the Battle of Okinawa.

The day also signaled the end of Okinawa&#8217;s rainy season, with temperatures topping 86 degrees at noon and the humidity making it feel more like 100. It was so hot that as some families knelt at the base of granite walls that bore the names of kin killed during the battle, the sweat from their brows mixed with their tears.

About 7,000 people who came to the park also attended the official half-hour memorial ceremony, which included a minute of silence for the dead.

&#8220;It has been 59 years since the end of the fierce war that claimed countless numbers of lives,&#8221; said Japanese Prime Minister Junichiro Koizumi. &#8220;Yet, the grief and pain of people who lost their loved ones are still with them. It is our duty to convey the tragic event to future generations and never let war happen again.&#8221;

Koizumi acknowledged the country&#8217;s debt to Okinawa, not only for bearing the terrible price during the battle, but also for hosting more than half the U.S. troops in Japan.

&#8220;The concentration of U.S. military bases places a huge burden on the people of Okinawa,&#8221; he said. &#8220;The government of Japan will make sincere and utmost efforts to reduce the burden they have shouldered.&#8221;

Following the ceremony, Koizumi told reporters the ongoing review of U.S. forces deployed throughout the world would have an impact on Japan. He said it&#8217;s important, however, to balance the need for reducing the American footprint on Okinawa with the obligation to retain a regional deterrence.

&#8220;It is an essential and important problem concerning the security and safety of our nation and, as such, the concern of all the Japanese people,&#8221; he said. &#8220;It is imperative that each and every citizen of Japan faces the issues of base consolidation and revision of the Status of Forces Agreement as their own personal problem.&#8221;

Although the politicians got most of the media attention, the more touching ceremonies were in the scattered knots of families who made offerings of fruit and beverages at the base of walls bearing the names of more than 200,000 killed in the carnage that was the last ground battle of World War II.

Among those smaller ceremonies were some 30 Americans who attended a brief service sponsored by the United Service Organizations.

The ceremony was for &#8220;all those who made the ultimate sacrifice for their country,&#8221; said Lt. Gen. Robert R. Blackman, commander of Marine Corps Bases in Japan. &#8220;As I look upon this Cornerstone of Peace, I am deeply moved by the courage, honor and commitment displayed by our forces during the battle.&#8221;

Standing nearby was Teruto &#8220;Terry&#8221; Tsubota, 82, a Japanese-American from Hawaii who served as an interpreter during the war for the 6th Marine Division. He said he owed it to his friends who did not survive the battle to attend.

Tsubota is a hero to the people who lived on Tsuken Island, just off Okinawa&#8217;s Katsuren peninsula, when Marines made a landing on April 10, 1945.

Tsubota called to them, but no one answered. Then, he did something he still doesn&#8217;t understand 59 years later.

&#8220;I gave my weapon to someone else and stripped to the waist and went inside,&#8221; he said. Some people pretended to be dead and didn&#8217;t move until Tsubota nudged them. Slowly, one by one, about 20 left the cave.

&#8220;I still do not know why I did it. Perhaps it was because I listened to my father who told me shooting alone is not war, that saving lives is also a part of war.&#8221;

Not far from the section bearing the names of the Americans, a small group of South Koreans paid respects to their fallen countrymen. Hundreds of Koreans &#8212; forced laborers and &#8220;comfort women&#8221; pressed into service as prostitutes for the Japanese army &#8212; were also killed during the battle.

There were all kinds of stories floating around Wednesday.

Kazutaka Miyagi, 61, from Urasoe, making his second anniversary visit to the park, offered cans of cold drinks and sushi before the wall panel carrying the names of his grandparents.

&#8220;My parents and I were in Kyushu during the wartime, but my grandparents were here and they were killed when the underground shelter in their yard was bombed,&#8221; he said, his voice cracking. &#8220;When I think of the pain and horror they had gone through &#8230;&#8221;

He could not finish his sentence and asked to be left alone.

In front of another zigzagging portion of the walls stood Kotoku Arime, with his wife, Kiku, and a sister crouched by his side. Arime lost his three brothers in the war.

Kowa Tasaki of Chatan said he also comes to the park each year.

&#8220;This is my stepmother, Kiyoko Koyama,&#8221; he said, pointing to a name on the granite monument. &#8220;After sending me and other family members to safety on at Yanbaru, she remained in Naha to watch over our house.

&#8220;Although everyone in the family who evacuated to the northern end of the island was safe, she died alone when their house was bombed.&#8221;

Hers was among more than 200,000 names being read and honored Wednesday. It&#8217;s the one lasting impression visitors to the Cornerstone of Peace retain &#8212; the names. Tens of thousands of names.