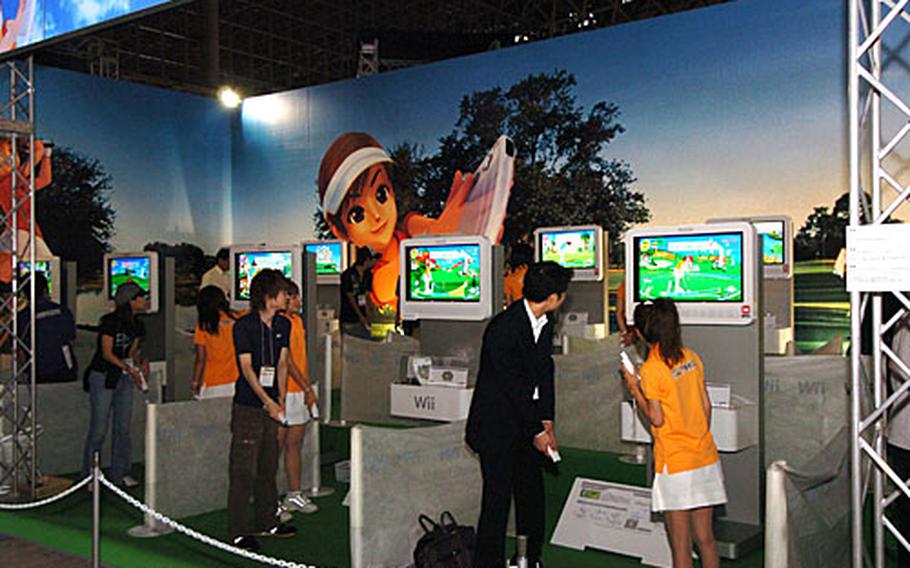 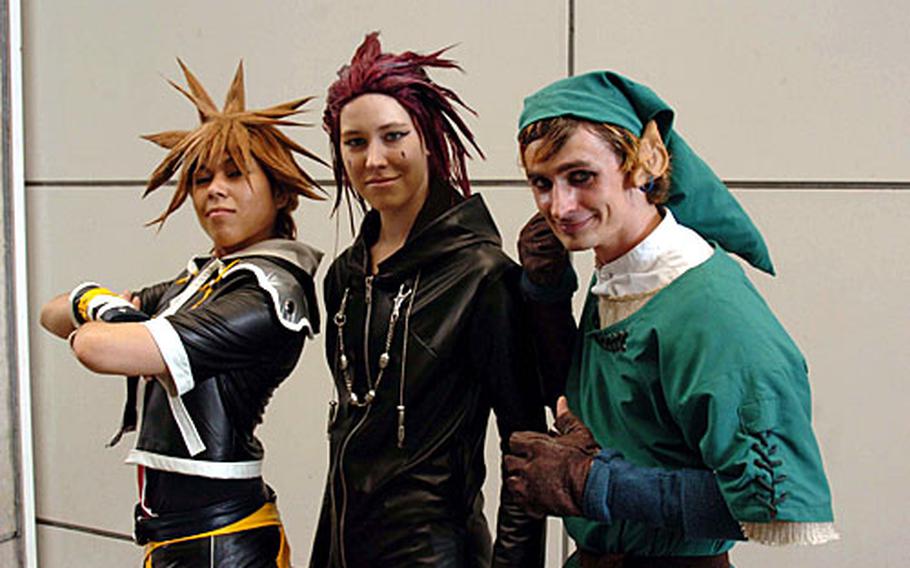 Australian attendees to the 2007 Tokyo Game Show simply known as “K”, “Vel” and “Drayke” pose while dressed up as their favorite video game characters. (Christopher B. Stoltz / S&S) 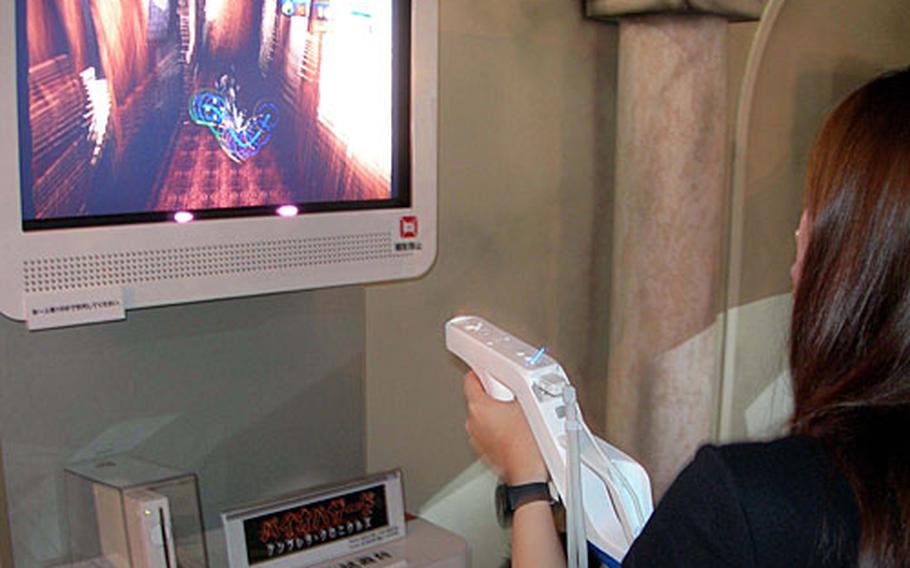 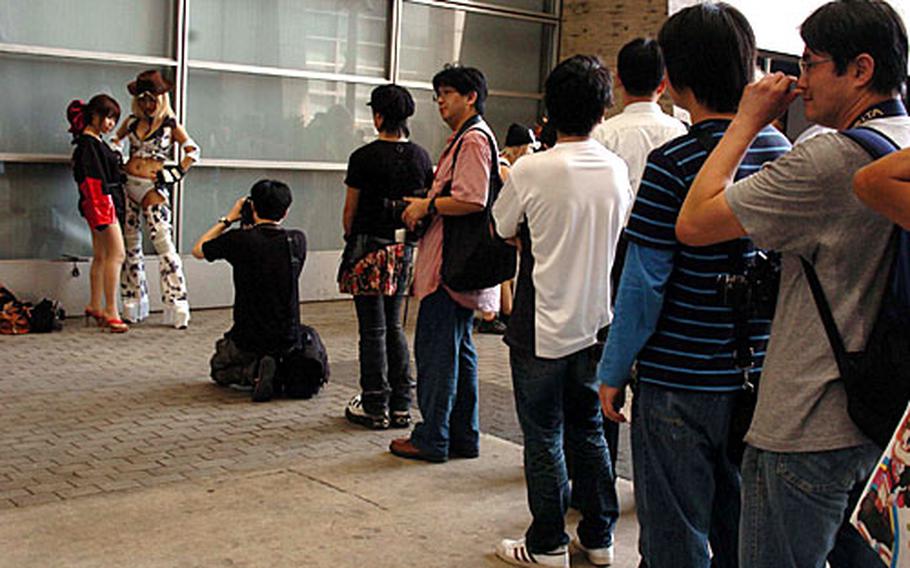 Japanese men line up to take photos of girls dressed as game characters at the Tokyo Game Show. (Christopher B. Stoltz / S&S) 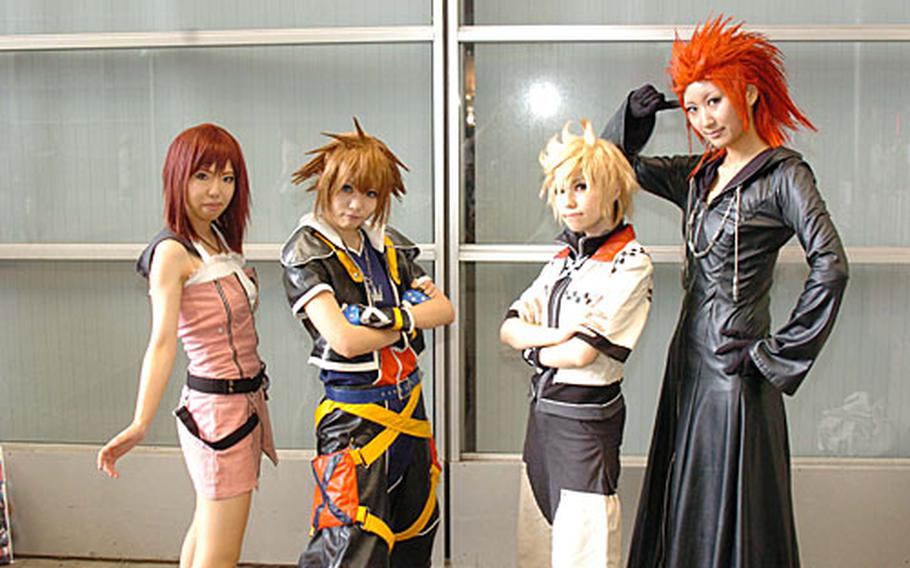 A group of Japanese girls pose as their favorite characters from Square Enix’s “Kingdom Hearts 2” at the 2007 Tokyo Game Show. (Christopher B. Stoltz / S&S)

TOKYO &#8212; Tens of thousands of video game fans swarmed the 2007 Tokyo Game Show exhibition halls, as the show opened its doors Saturday morning to the general public for the first time this week.

As soon as the doors opened, throngs of people poured into the Makuhari Messe convention center, creating massive lines at all the popular booths.

The line for the playable demo of &#8220;Metal Gear Solid 4: Guns of the Patriots&#8221; which had been about a 40-minute wait during the two previous days of the show, suddenly became a 210-minute wait.

Some fans dived straight into the madness of the lines and crowds. Others, including Senior Airman Robert Hopkins, from Yokota Air Base&#8217;s 374th Communication Squadron, chose to take their time before committing to a several-hour wait.

&#8220;Inside is still better than the lines outside to get in,&#8221; added Airman 1st Class Jeff Perry, from the 374th Medical Support Squadron.

Both airmen came to the show as part of a trip organized by members of the Computer Users Group of Yokota.

Perry said he was hoping to find out more, and maybe even play several next-generation shooters such as &#8220;Unreal Tournament 3.&#8221;

While many came to view the latest and greatest in video games, others were just there to have fun.

&#8220;We&#8217;re really just here to check out the atmosphere of the convention,&#8221; said Pete Browning, who is visiting from Orlando, Fla., with his girlfriend, Veronique Conus.

Both avid video gamers, Conus said they timed the trip to coincide with when the Tokyo Game Show was taking place.

Dress-up timeOne group of attendees that always stands out at gaming conventions are the cosplayers, fans who make and wear costumes of their favorite characters.

Twenty-five-year-old &#8220;Shinagawa Kinshina,&#8221; the name he goes by when he dresses up, was dressed as Link from &#8220;The Legend of Zelda.&#8221; He said the Tokyo Game Show and comic conventions are the only time he gets to dress up in his favorite character.

Near the Square Enix booth, a group of four Japanese women were dressed as characters from the game, &#8220;Kingdom Hearts II.&#8221;

Dressing up for these events is not just about having fun. There is a great commitment for some.

He said that he has been into cosplay for more than 10 years and attends an average of three such events a year.

COMING SOON&#8216;Wii Love Golf&#8217; One of my first games on the original Nintendo Entertainment System was &#8220;Golf at Pebble Beach,&#8221; which tooksix months to really figure out how to play.

Children, grandparents and those in between should be able to learn this cute, cartoon-style game in very little time.

The swing is measured by a chart at the bottom of the screen. Players hold the &#8220;A&#8221; button while slowly moving the controller back to their indicated mark and then swing forward to hit the ball.

The tone of the game is light and forgiving, so gamers should not feel too bad if they end up in the rough.

During the demo I played at the Tokyo Game Show, I practiced my hooks and slices as I watched my ball soar off course a few times while still managing to squeak away with a double bogey.

The sequel to one of my favorite games from Sega Saturn, I happily stood in an hourlong line for a chance to try game developer Sonic Team&#8217;s latest creation.

The controls are simple and smooth, and do not rely heavily on the Wiimote&#8217;s motion-sensing capabilities. Instead, the player navigates the character through the three-dimensional world by using the control stick on the nunchuk attachment. Gameplay is very similar to the original game in both feel and presentation, with the bright colors and graphics Sonic Team is known for.

Rumors have been circling recently that the game will be delayed until next year, though I&#8217;m keeping my fingers crossed and my Wiimote nearby in hopes that it releases on schedule.

Sadly, after playing an RE demo at the Tokyo Game Show, I felt just that: tired, lethargic and a little bored.

While the game does make good use of the Wii&#8217;s motion-sensing features, including using the nunchuk as a knife for close quarters fighting, the rest of the game seemed slow.

Operating on a rail-based system, the screen chugged along as I picked off zombies that eased towards me at a dreadfully slow and predictable pace.

Resident Evil: Umbrella Chronicles is scheduled for release on Nov. 13, 2007.