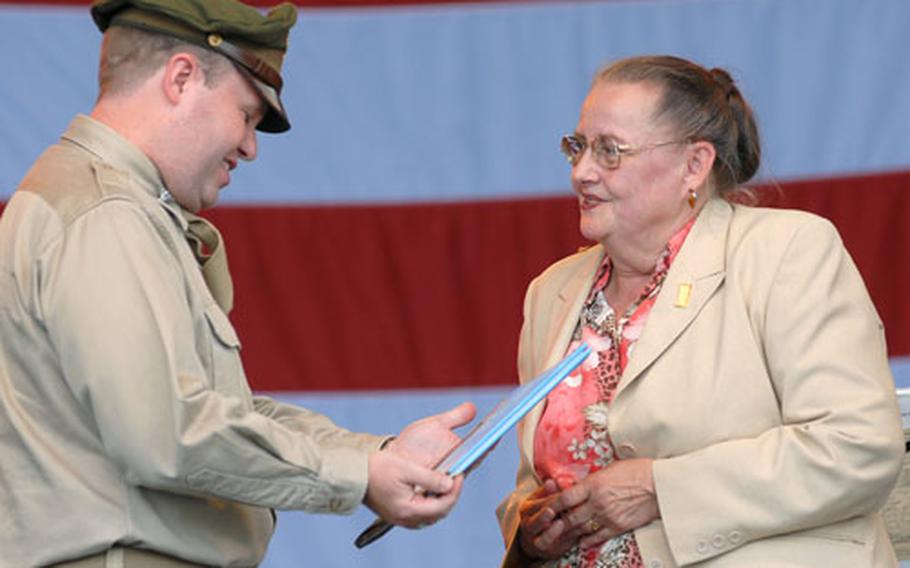 Mercedes Wild presents a copy of the book "Mercedes and the Chocolate Pilot" to U.S. Army Garrison commander Col. Ray Graham at the Berlin Airlift Open House on Sunday. As a little girl living in Berlin, Wild wrote "Candy Bomber" Gail Halvorsen a letter asking him to drop candy on her house. Halvorsen wrote a letter instead, the begining of a lifelong friendship. (Michael Abrams / S&S)

Mercedes Wild presents a copy of the book "Mercedes and the Chocolate Pilot" to U.S. Army Garrison commander Col. Ray Graham at the Berlin Airlift Open House on Sunday. As a little girl living in Berlin, Wild wrote "Candy Bomber" Gail Halvorsen a letter asking him to drop candy on her house. Halvorsen wrote a letter instead, the begining of a lifelong friendship. (Michael Abrams / S&S) 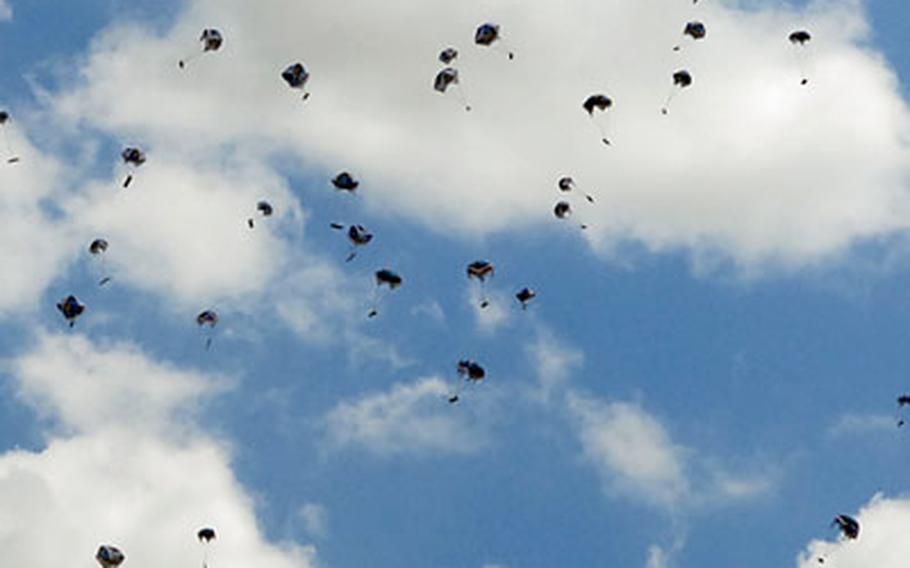 Hundreds of tiny parachutes bearing chocolate bars and chewing gum float to the ground after being dropped from a helicopter by Berlin Airlift veteran Gail Halvorsen. (Michael Abrams / S&S) 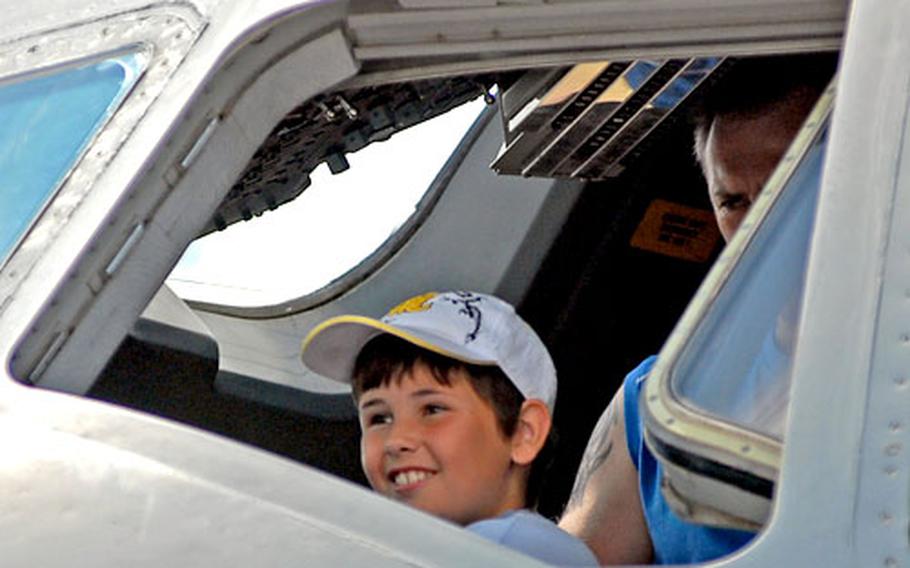 A youngster enjoys his chance to sit in the cockpit of a C-17 Globemaster III at the Berlin Airlift open House at Wiesbaden Army Airfield on Sunday. (Michael Abrams / S&S) 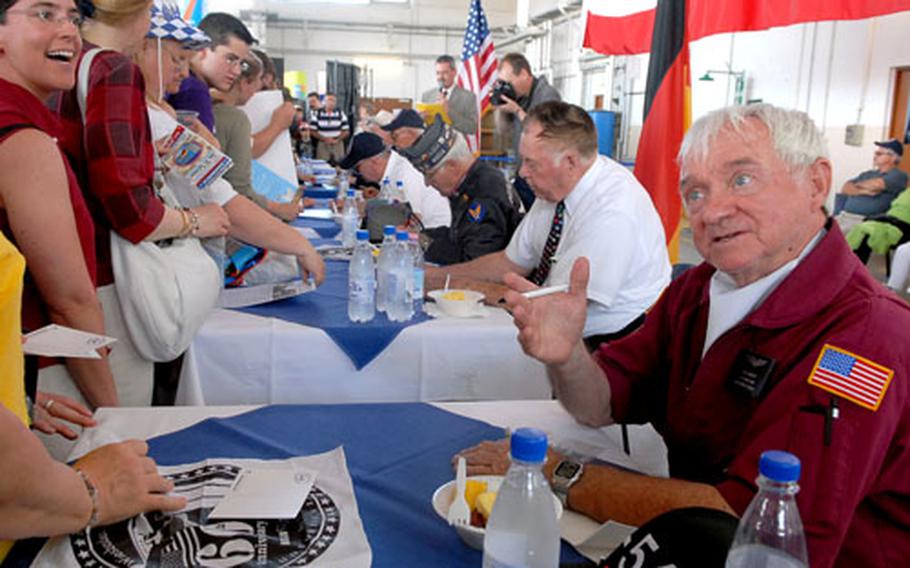 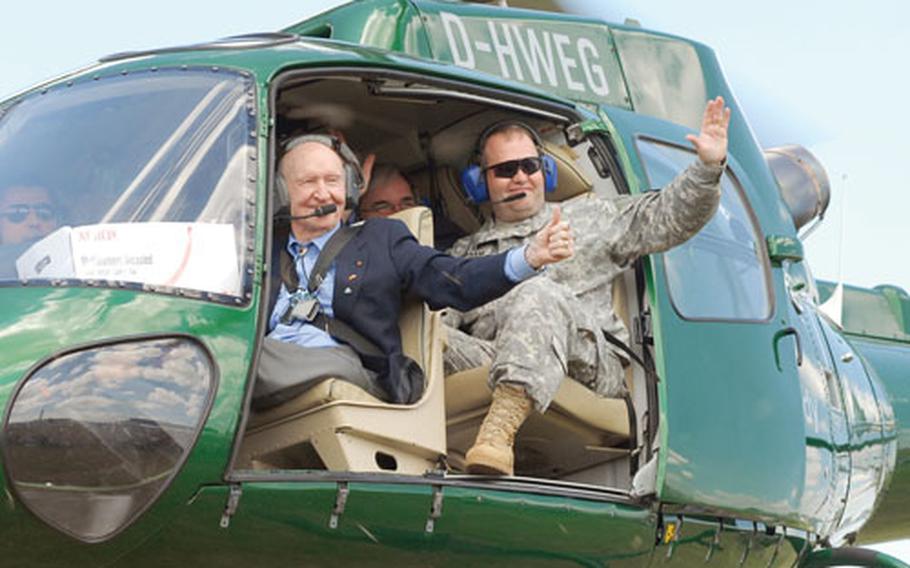 Berlin Airlift veteran Gail Halvorsen, left, and U.S. Army Garrison commander Col. Ray Graham signal to the crowd as they take off for a parachute drop of candy during the Berlin Airlift Open House on Sunday. Tens of thousands of visitors came out for the first open house at the airfield since Sept. 11, 2001. Halvorsen got the nickname "Candy Bomber" when he dropped candy via tiny parachutes to the children in Berlin during the airlift. (Michael Abrams / S&S)

WIESBADEN, Germany &#8212; If Sunday proved anything, it is that Germans haven&#8217;t forgotten the Berlin Airlift.

At least 40,000 people &#8212; mostly Germans &#8212; showed up for Wiesbaden Army Airfield&#8217;s open house commemorating the 60th anniversary of what remains to this day the biggest humanitarian airlift operation in history.

It was the first such commemoration in which Germans were invited en masse in a decade, said Helmut Hermanowski, a German World War II veteran who fought against the Americans at Normandy. He was later captured near Metz, France, and taken as a prisoner of war to Belgium, where he was put to work in an American hospital.

But there are no hard feelings.

"They should make it every year," said Hermanowski of the airlift celebration. He went to all the previous celebrations, he said, and carried with him an original newspaper printed for the 1988 open house at the former Rhein-Main Air Base. "I missed it very much."

Tens of thousands of Germans were bused onto the airfield, where music blared, people waited in long lines for helicopter rides and food, and airlift veterans were celebrities.

"Like the World War II and Korean veterans, the veterans of the Berlin Airlift are all &#8212; they&#8217;re passing on," he said. "They have left a legacy that&#8217;s the benchmark for humanitarian airlift."

Germans are still keenly aware of what the Americans and British did for Germans during the airlift, and they continue to hand down the stories and history, said Gerhard Wiesinger, a German who works for the U.S. consulate in Frankfurt.

"In the case of my daughter for example, every time we go to Darmstadt &#8230; we pass by the airlift monument and I explain to my daughter the meaning of that monument, so she knew about it, too," he said.

They remain grateful for the more than 2 million tons of food, coal, medicine and other supplies that American and British planes &#8212; as well as some French fliers &#8212; airlifted to West Berlin to overcome the Soviet blockade threatening to starve some 2.5 million into submission. But every German has heard of the "Candy Bomber" &#8212; Gail Halverson &#8212; and the people who carried out and organized the mission, Wiesinger said.

"And so they are celebrities. And not only celebrities like Paris Hilton, but heroes in the truest meaning of the word."