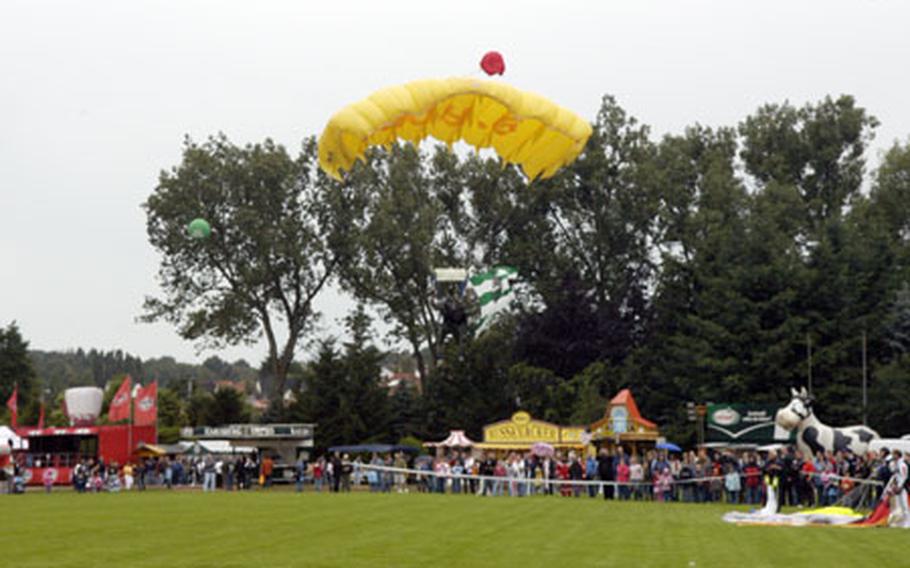 Rheinland-Pfalz Days - an annual three day festival - kicked off Friday with sky divers dropping down on Baumholder, which is the host city for this year&#39;s state fair. (John Vandiver / S&S)

Rheinland-Pfalz Days - an annual three day festival - kicked off Friday with sky divers dropping down on Baumholder, which is the host city for this year&#39;s state fair. (John Vandiver / S&S) 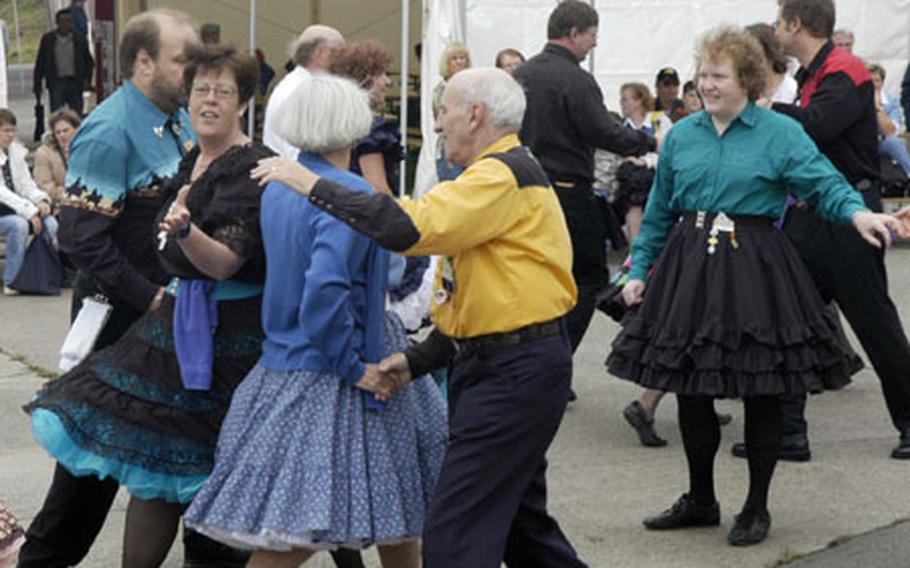 A German group of performers showcases their square dancing skills at the U.S. Army site, where American traditions were on display for Rheinland-Pfalz Days. (John Vandiver / S&S)

BAUMHOLDER, Germany &#8212; For Kyle Beal, 14, it was all about the military hardware, the food and the rides. For his grandmother, the attraction was the displays of arts and crafts and the work of jewelry makers.

At Rheinland-Pfalz Days &#8212; the region&#8217;s annual state fair &#8212; there was something for just about everyone as tens of thousands of people descended on Baumholder, site of this year&#8217;s festival and home to the U.S. Army&#8217;s 1st Armored Division, 2nd Brigade.

Because the U.S. military presence in Baumholder is such a big part of the community, the Army participated in the fair. Tanks, bomb detection robots and body armor were among the equipment on display.

U.S. and German military displays, however, are only a small part of the festivities, which was to continue Sunday with an afternoon parade through town.

The fair features the food, commerce and customs of the Rheinland-Pfalz region and spotlights the attractions of the state&#8217;s cities, including Trier, Koblenz and Mainz. About 100,000 people were expected to attend the fair, which transformed Baumholder&#8217;s usually sleepy downtown streets into a twisting network of walking paths.

Several stages for musical performances and various exhibitions are scattered around the grounds with countless food booths, beer gardens and amusements.

The event required numerous street closures for the weekend. The main gate to Smith barracks also was closed. Nonetheless, traffic appeared to move smoothly through detours around town.

While visitors, off-duty soldiers and their families strolled the grounds, some soldiers remained on duty. Pvt. Robert Iverson, 22, spent the day explaining the function of the Paladin Self-Propelled Howitzer to curious visitors.

From down-home square dancing exhibitions during the day to dance parties at night, the festival had a little country and a little rock and roll.

After eating his hamburger Saturday afternoon, Beal looked at the map of the festival grounds, looking for the way to the rides.