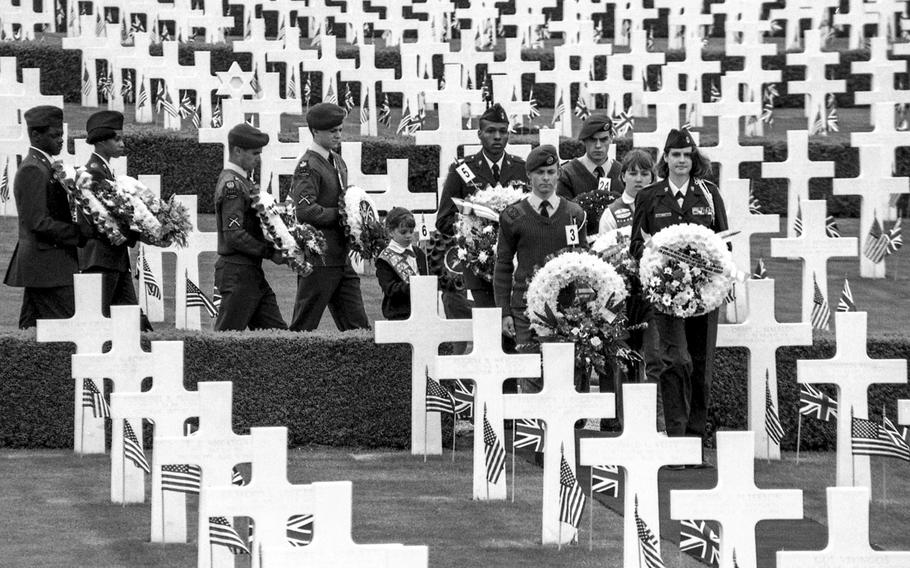 Buy Photo
Representatives of various military services walk through the Cambridge American Military Cemetery with wreaths to honor the 3,812 fallen and 5,125 names on the Wall of the Missing in June, 1994. (Dave Didio/Stars and Stripes)

MADINGLEY, England — More than 5,000 U.S. and British veterans, military personnel and other spectators turned out in cold, wet weather Saturday to honor America's World War II dead and to witness the first visit by a U.S. president to the Cambridge American Military Cemetery at Madingley.

President Clinton and first lady Hillary Rodham Clinton attended the event with British Prime Minister John Major and his wife, Norma, as well as other American and British officials.

Also in attendance were former CBS News broadcaster Walter Cronkite and U.S. Treasury Secretary Lloyd Bentseri, who served as a B-24 pilot and squadron commander in Europe daring World War II and who earned the Distinguished Flying Cross and Air Medal.

The 350-acre cemetery, about 14 miles west of Cambridge, was established as a temporary military cemetery in 1943 on land donated by Cambridge University. The site was dedicated in 1956 as the only permanent American World War H cemetery in the British Isles. It contains 3,812 graves and 5,125 names on the Wall of the Missing.

Typical English weather "sprinkled rain throughout much of the hour-long memorial ceremony, turning to heavy rain just after a B-17 Flying Fortress, a P-15 Mustang and a Spitfire flew low over the crowd, marking the end of theservice.

The ceremony also was marked by four F-15E Strike Eagles from the 492nd Fighter Sq at RAF Lakenheath, which flew by in the missing man formation to honor the war dead. Also, a musical tribute to band leader Glenn Miller, whose name appears on the Wall of the Missing, was performed by the U.S. Air Forces in Europe Band,

In his address to the crowd, Clinton said: "We have come here today on a journey of remembrance. In their age, all these people on the wall and all these people behind us (in graves) were equal ... They were all Americans. They fought to defeat a great evil that threatened to destroy our very way of life, what Winston Churchill called 'the great principles of freedom and the rights of man, which are the joint inheritance of the English-speaking world.'

"For long months, Britain bravely carried that fight on alone," Clinton said. "In the Battle of Britain, night after frightful night, the people of this besieged island withstood the fierce attacks of multibombings. It was their finest hour. Amid the horror, the British looked west for help. Then the Yanks came, deepening one of the world's profoundest bonds. America gave to England an infusion of arms and men. The British gave our troops the feeling that they were not so far from home after all. The British gave us inspiration. The Americans gave, in return, hope ...

"The generation that won the Second World War completed their mission. Whether they walk among us, or lie among us today," Clinton said. "And after looking down in sorrow at those who paid the ultimate price, let us lift our eyes to the skies in which they flew, the ones they once commanded, and let us send to them the signal. A signal of our own that we do remember, and that we do honor, and that we shall always carry on the work of these knights borne on wings,"