Those left behind ponder reasons for fatal helicopter crash in Afghanistan 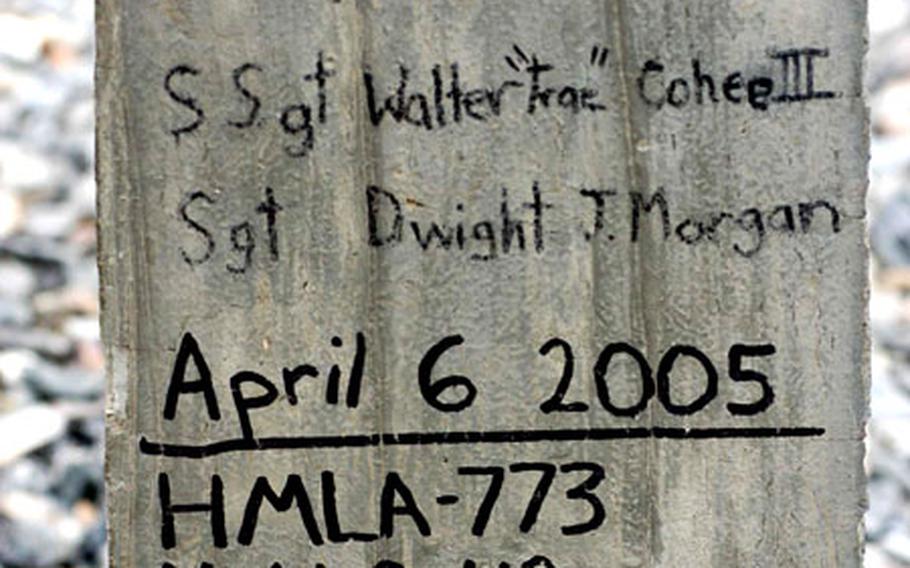 The Marines of Task Force Red Dog have added the name of Sgt. James Lee, who was killed in last week’s helicopter crash in Afghanistan, to a memorial for their fallen at the flag pole at Bagram Air Base, Afghanistan. Their mission completed, the Marines of TF Red Dog are on their on the way home, and Lee was returning to Bagram from Forward Operating Base Orgun-E when the helicopter crashed. A permanent plaque is being made to replace the makeshift memorial. (Michael Abrams / S&S)

BAGRAM AIR BASE, Afghanistan &#8212; Ronald Wade, Lance Taylor and Sy Lucio were making one of their frequent trips between far-flung locations. Spc. Chrystal Stout was on her first trip outside the wire. Sgt. James Lee was on his way back to pack up and head out of the country.

The five crewmembers and 13 passengers aboard the CH-47 Chinook helicopter that crashed April 6 &#8212; killing all aboard &#8212; were on that particular flight while performing a variety of missions. But they all came together for that fateful flight. Six of those on the flight are officially listed as missing by the Pentagon, but all aboard are presumed dead.

Army Capt. Randall Price, who lost two soldiers in the crash, is among those pondering what some might call fate.

Many, such as Lt. Col. Jonathan Allen, believe there was a greater hand involved. He said Lee was the last of his Marines outside Bagram. The 26-year-old was securing ordnance left at Forward Operating Base Orgun-E. Task Force Red Horse, composed of Marine aviators and support personnel, was scheduled to leave the country Thursday.

Lee had missed an earlier flight before getting on the Chinook that was headed back to Bagram.

Gunnery Sgt. Mikel Culver went to the same church, Trinity Chapel, as Lee did in Powder Springs, Ga. He remembers talking about Scripture with Lee.

Sgt. Leoreen Mackey, who bunked with Stout at Bagram and spent a year with her at a military specialty school, said her friend was &#8220;excited to go out and do a mission.&#8221; Stout, 23, was installing virus protection programs on computers at various locations. She was on the mission because another soldier was on leave.

Sgt. Stephen High, a member of the 228th Signal Brigade with Stout, had spent 15 years in the Navy before joining the National Guard. He was instructing other soldiers on the use of new Army radios. Price said High had visited locations all over the country, trying to get others up to speed.

Wade, Taylor and Lucio were civilian employees of Kellogg Brown & Root Services. Jimmy Baugh, who supervises work at 50 sites in Afghanistan, said the three were headed back from working at Orgun-E.

&#8220;They were coming in as a team and after two or three days, they were going to go back out again to another location,&#8221; Baugh said.