Thorpe Park: Screams are constant at amusement park near London 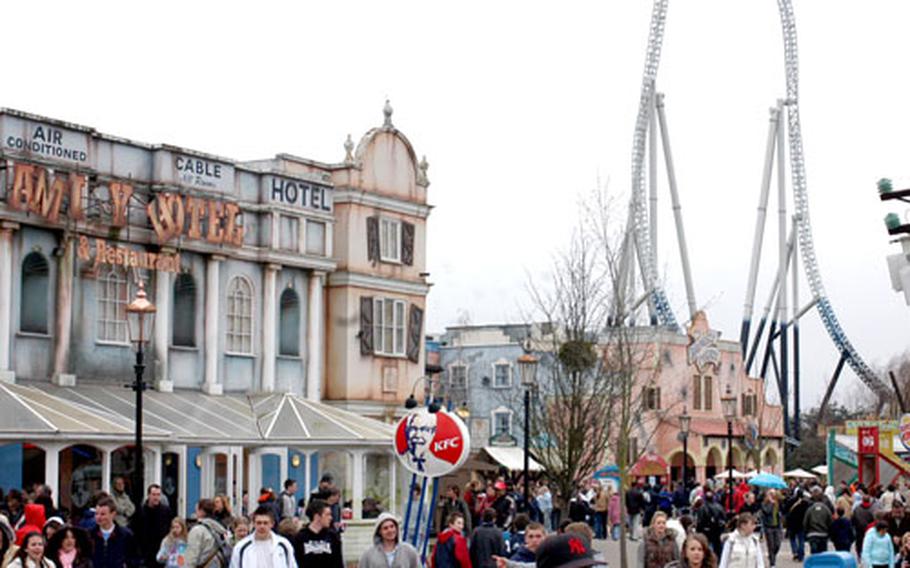 Throngs of amusement-seekers crowd the faux-seaside streets of Amity, Thorpe Park&#39;s fantasy playland, while riders on the new Stealth get ready for a rapid descent in the background. (Ben Murray / S&S)

Throngs of amusement-seekers crowd the faux-seaside streets of Amity, Thorpe Park&#39;s fantasy playland, while riders on the new Stealth get ready for a rapid descent in the background. (Ben Murray / S&S) 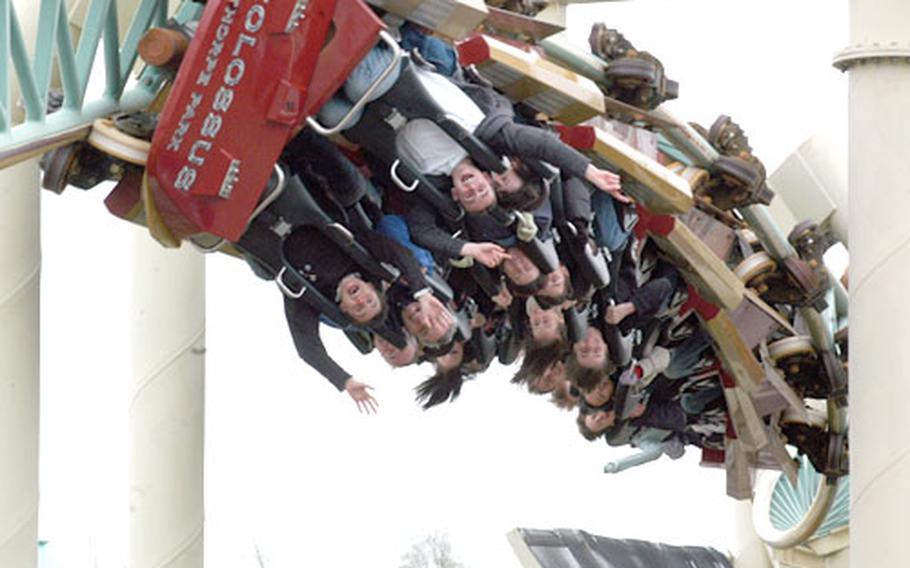 Colossus takes riders through a set of barrel rolls at the bottom of the ride. The wait for this coiling roller coaster can be long. (Ben Murray / S&S) Riders at the front of Stealth, Tussauds Thorpe Park’s biggest and fastest new attraction, react to the rush of accelerating from zero to 80 in just over two seconds. (Ben Murray / S&S)

TUSSAUDS THORPE PARK &mdash; One of the first things you notice about Tussauds Thorpe Park just west of London is that never, at any point, does the screaming stop.

Stand in the center, near Mr. Monkey&rsquo;s Banana Ride, and at almost every angle you can see bodies whistling through the air, limbs at heights and angles never intended for humans, faces contorted in a combination of panic and glee.

And these people, by and large, scream so much that it becomes a constant background noise, some in an expression of exhilaration, others just because that&rsquo;s what you do when you plunge toward the earth on a roaring metal train.

To call Thorpe Park an amusement park would be to understate the accomplishments of engineers, who have figured out how to propel you through a twisting loop at 50 miles an hour with your legs hanging free, then drop you into the mist-shrouded innards of a fake volcano.

The teacup ride is amusing. Accelerating from zero to 80 mph in 2.3 seconds is, by most rights, the closest thing you can get to teleporting.

Thorpe Park, a compact facility just inside the M25, resembles a mini Disney World in many ways, complete with a pirate ride, an indoor roller coaster and the mock-Thunder Mountain. Though it lacks the scale and grandeur of the Magic Kingdom, it competes in prices and also can be crowded. A ticket costs 28.5 pounds for adults, and 20 pounds for kids up to 11 years old. Waits at popular rides can exceed an hour on busy days.

Set around the fantasy resort town of Amity, the park has plenty for toddlers and young kids: a carousel and gentle water slide, the banana boat ride and carnival games.

But for its size, the real strength of Thorpe Park is in its concentration of nausea-inducing thrill rides aimed at titillating young teens and adults, contraptions with names such as Colossus, Rush, Slammer and Detonator.

Based on the advice of 12-year-olds, a good place to start is the Nemesis Inferno, the twisting, legs-free coaster that goes through the volcano. The giant coaster Colossus is a favorite, with its towering loops and terrifying below-ground stoop, set next to X:\No Way Out, an indoor, in-the-dark experience.

But lording over the tepid log flume and Rumba Rapids, rising from the carnival arcades like the Gateway Arch, is the park&rsquo;s newest and most ferocious equilibrium slayer, the Stealth.

This is the zero-to-80 ride so quick and intense that people scream in anticipation before the thing even moves.

And when it does, it accelerates so quickly that riders practically go back in time, regressing to see the moment they were stupid enough to get on the thing. Then it rockets straight up to a disturbing height of 205 feet.

Here the mock-&rsquo;50s roadster waits just long enough for the screams to catch up, then plummets down toward the pavement in a half-spin, sucking riders&rsquo; eyeballs into their frontal lobe.

It&rsquo;s awesome, but over extremely quickly. For those averse to a potential wait vs. ride-length ratio of an hour to about 15 seconds or less, there is an alternative. Thorpe Park allows customers to pay an extra 3 pounds per ride to get in the &ldquo;fast track,&rdquo; a shorter line where rider numbers are kept low by limiting the number of tickets sold per hour. Packages of multiple fast track tickets can be bought for different sets of rides.

It&rsquo;s handy, but it&rsquo;s an extra cost that, on top of food, admission and carnival games &mdash; all set in the almighty pound &mdash; can start to hurt for Americans.

At least the parking&rsquo;s free.

For more information, contact your local Information Tickets & Travel office for upcoming excursions to the park or go to www.thorpepark.co.uk/