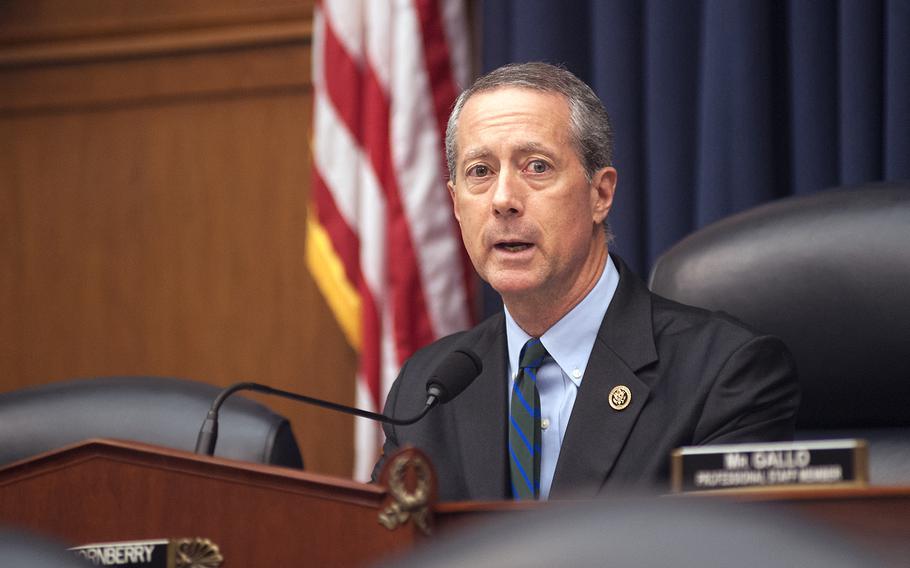 Chairman of the House Armed Services Committee Mac Thornberry, R-Texas, gives an opening statement addressing the state of the fight against Islamic terrorism during a hearing on Capitol Hill in Washington, D.C., on Wednesday, Sept. 21, 2016. (Carlos Bongioanni/Stars and Stripes)

WASHINGTON — The chairman of the House Armed Services Committee said Monday that the Republican effort to reform entitlement programs could create an opportunity for higher military spending as lawmakers hash out their first budget under President Donald Trump.

Rep. Mac Thornberry, R-Texas, said the effort by House Republicans under Speaker Paul Ryan to cut the costs of Medicare and Medicaid, repeal the Affordable Care Act, known as Obamacare, and reform the tax code could put large swaths of federal funding “in play” and potentially open up more money for defense spending.

“So, there’s some big moving pieces we have not had before,” he said.

Thornberry and Sen. John McCain, R-Ariz., who is chairman of the Senate Armed Services Committee, have proposed a $640-billion base defense budget for 2018 – up from the $543-billion base budget planned for this year. Trump has also made it part of his policy to rebuild the forces and last month asked Defense Secretary Jim Mattis to review readiness and put together a budget plan.

But it remains uncertain how Congress might cobble together such an increase. Defense spending is capped by federal law at $549 billion, not including overseas war spending, unless lawmakers reach an agreement on new legislation to raise the limit.

Congress has a lot of budget work ahead. It must still finalize spending for this year, deal with an expected request for supplemental military funding from the Trump administration next month and debate the ambitious slate of reforms proposed by Republicans, who now control the White House and both chambers of Congress.

Despite the optimism from Republicans, changes to the entitlement programs are likely to face ferocious opposition from Democrats. Trump has also differed with Ryan, who has long sought entitlement reforms, over changes to Medicare and Medicaid, programs that provide health insurance to older and poorer Americans.

“Remember two-thirds of the federal budget is entitlement spending and I think the point that several people made was, ‘OK, you’ve got to pay attention to that,’ which I certainly don’t disagree with,” Thornberry said.

Thornberry will play a key role in crafting the defense budget. He said there is widespread support among lawmakers for big boosts in military spending.

The House and Senate Armed Services Committees have warned defense spending must increase by billions of dollars because falling budgets since the end of the ground wars in Iraq and Afghanistan have reduced the military’s ability fight wars, train and maintain its equipment.

“I think there are folks on both sides [of the political aisle] who support what I’m talking about … to turn these cuts in defense around,” Thornberry said. “So, I’m pretty optimistic that it will actually happen.”