Thornberry: Defense budget could get sidelined 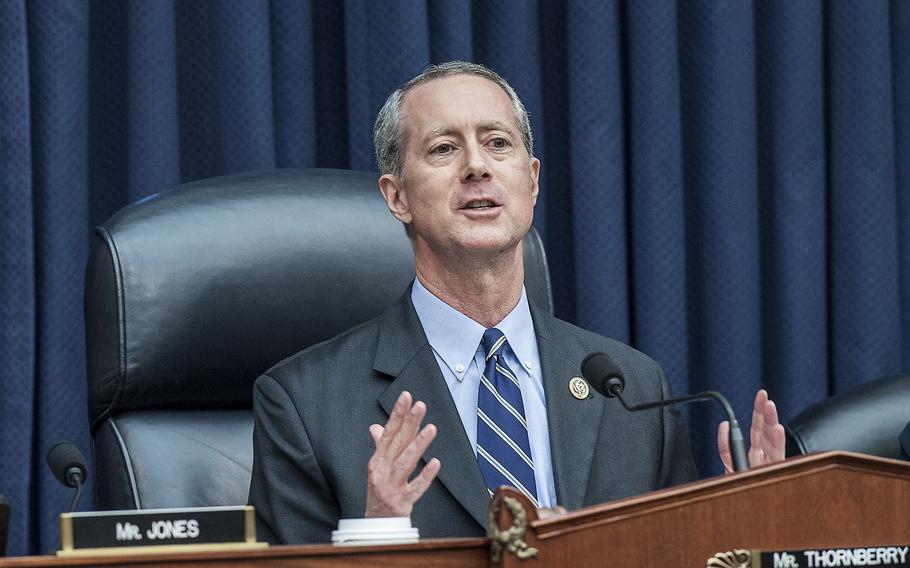 Chairman of the House Armed Services Committee, Rep. Mac Thornberry, R-Texas, speaks during a hearing Feb. 7, 2017, on Capitol Hill addressing the readiness of the U.S. military. (Carlos Bongioanni/Stars and Stripes)

Thornberry, R-Texas, also raised continued concern that in the face of delays to address new defense funding, a rash of recent and “shocking” Naval warship crashes are obvious symptoms of a strained military operating without badly needed resources.

Thornberry, speaking at a defense conference in Arlington, Virginia, said four times as many servicemembers have died this year in noncombat operations and training than troops in combat.

“That is not a good trend,” he said. “It reflects the stresses and strains that have been put on the military because of high operational demands, a series of dysfunctions in the executive and congressional branches and a world that is not slowing down to wait for us to catch up.”

Lawmakers are facing a series of urgent and looming deadlines to address emergency funding in the wake of Hurricane Harvey, debt ceiling concerns and keeping the government operating. Congress in May passed an overdue $1.1 trillion budget for 2017, and now must approve funding for the new 2018 fiscal year starting Oct. 1.

In July, the House passed two defense spending bills nearing $700 million with significant bipartisan support, but the Senate has yet to make similar progress. And despite Sen. John McCain, R-Ariz., returning this week to his post as chairman of the Senate Armed Services Committee to address the defense budget, other priorities might prevail.

As a result, many lawmakers expect an overall defense budget sidelined. Instead, they expect Congress will pass a stopgap measure, known as a Continuing Resolution, perhaps until December.

Thornberry begrudgingly agreed with that outlook.

“We are going to do the same thing we have been doing, the same thing that got us into this mess: Pass a CR at least until December. I cannot hide that I am disheartened and unhappy at this state of affairs,” he said. “Too many people want to hold defense spending hostage for other political priorities. And the results of that are CRs that go on too long.”

Thornberry said the Navy warship crashes and an increase in accident rates for the military in other cases is at least partially a result of funding that does not match with what is expected.

“We need to do better,” he said. “I can’t say those (Navy crashes) were inevitable, but I can say we got warning lights. We were asking too much of our folks and the truth is all of the services have experienced similar problems.”

Defense hawks must also battle expectations from others looking for cuts in military spending. For example, Thornberry expressed surprise that the budget proposed earlier this year by President Donald Trump’s administration suggested a cut in missile defense. Instead, Thornberry is expecting an increase in such spending as a result of the crisis with North Korea.

A more permanent, overall defense funding solution is especially key as the threats from North Korea rise, he said.

“We are going to come to the end of a September without the ability to have a full year appropriations bill, which is exactly what we need … to show the rest of world that we are competent and able to stand up and defend ourselves.”