This weekend, tanabata is the star of Misawa's festival season 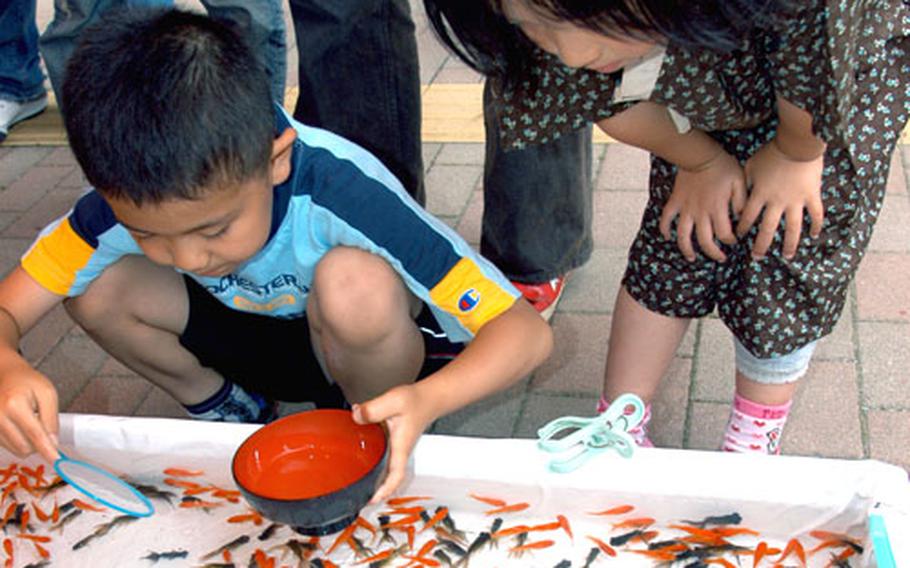 Catching goldfish in a bowl is one of many children’s games lining the streets outside Misawa Air Base for this weekend’s festival. (Jennifer H. Svan / S&S)

Catching goldfish in a bowl is one of many children’s games lining the streets outside Misawa Air Base for this weekend’s festival. (Jennifer H. Svan / S&S) 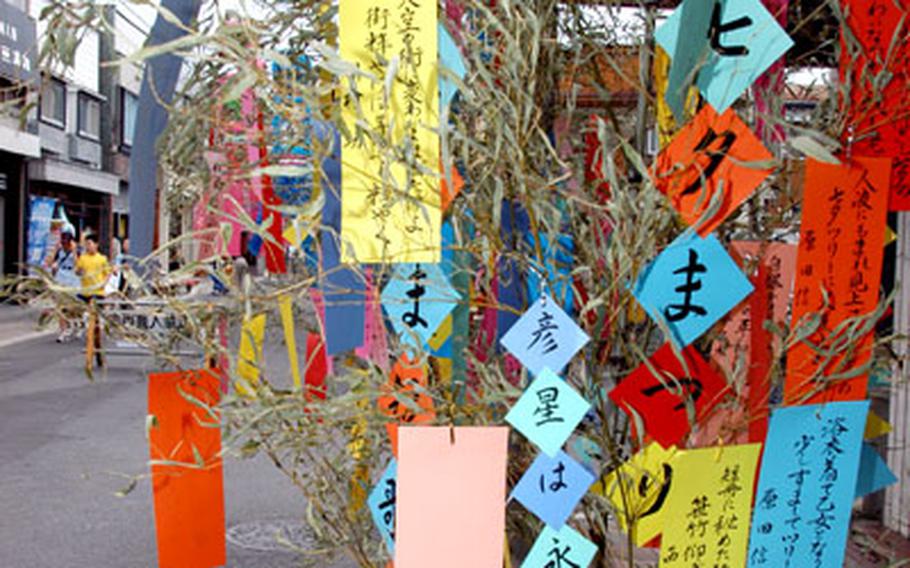 During the Tanabata Festival, children and adults write their wishes on paper strips and tie them to bamboo branches. The festival in Misawa city runs through Sunday, from 1 to 9 p.m., kicking off the busy summer festival season in northern Japan. (Jennifer H. Svan / S&S)

MISAWA, Japan &#8212; Streets outside Misawa Air Base&#8217;s main gate will be awash this weekend with billowing streamers, prim but bright yukatas, food stalls&#8217; tempting smells and children&#8217;s activities, from catching goldfish to zooming around in minicars.

The papier m&#226;ch&#233; decorations went up Friday afternoon outside local businesses, transforming the downtown merchants&#8217; area into a festive party in just a few hours.

During tanabata, children and adults write their wishes on paper strips and tie them to bamboo branches. Said to date back more than 2,000 years, the tanabata tradition is based on a Chinese tale in which two lovers, the Weaver Star Vega and the Cowherd Star Altair, are separated by the Milky Way and allowed to meet only once a year. The festival celebrating that reunion continues through Sunday, from 1 to 9 p.m.

On Wednesday, northern Japan&#8217;s most famous summer festival gets under way. The nebuta matsuri runs through Aug. 7 in Aomori. Several theories on the festival&#8217;s origin exist. One links it to the conquering of rebels in northern Tohoku in the early 800s by a general whose warriors made large creatures called &#8220;nebuta&#8221; to frighten the enemy.

Nebuta floats are made of wood and covered with bright-colored Japanese paper, backlit by hundreds of light bulbs. Festival-goers in equally stunning costumes parade between the floats to drums and bamboo flutes.

ITT already has sold out 160 bus seats to the festival, but Mulrooney said people can buy Misawa-Aomori train tickets downtown. Information about the festival can be found at: www.nebuta.or.jp/english/index_e.htm.

Other area festivals include:

Hachinohe Sansha Festival: The 280 year-old festival in Hachinohe starts Monday and runs through Aug. 4. It features parades of floats based on myths and kabuki stories. About 27 decorations will be on display from 6 to 9 p.m. on Monday and Aug. 4.

Misawa Port Festival: Aug. 27 at Misawa Fishing Port. It features events throughout the day, including a children&#8217;s sumo tournament and fireworks at 7 p.m.