This time, depleted uranium questions are coming from the Army first 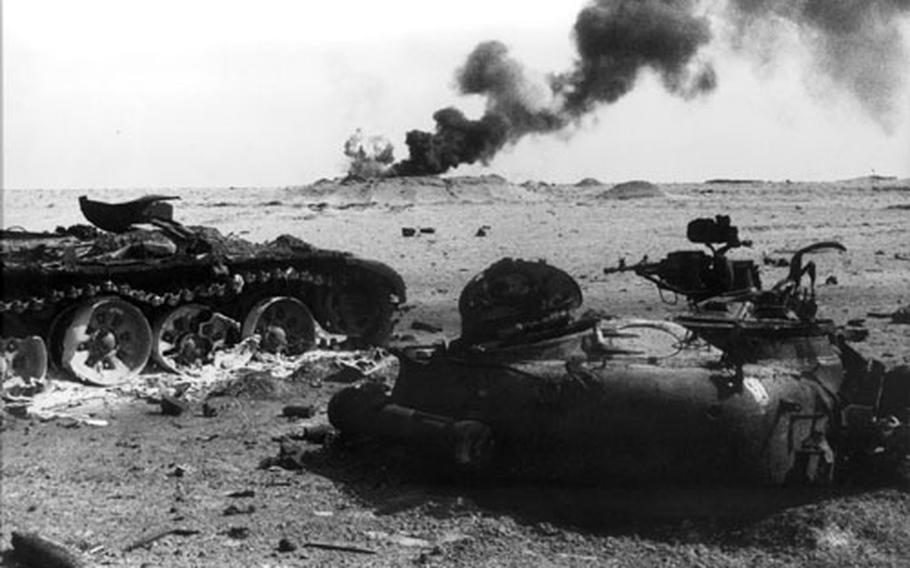 Buy Photo
The charred remains of tanks lie in a heap during the 1991 Persian Gulf War. As concerns over depleted uranium grew in the aftermath of the Gulf War, Army doctors were largely in a reactive mode, waiting for soldiers to broach the subject of radiation exposure. Now, troops returning from Iraq are being asked about depleted uranium — as well as other potentially dangerous toxins in an Army-wide post-deployment questionnaire. (Stars and Stripes file photo)

As concerns over depleted uranium grew in the aftermath of the Persian Gulf War, Army doctors were largely in a reactive mode, waiting for soldiers to broach the subject of radiation exposure.

That approach was partly due to an absence of health and deployment data, which impeded efforts to cure and compensate people.

Now, as the Army manages the largest force rotation in decades, troops returning from Iraq are being asked about depleted uranium &#8212; as well as other potentially dangerous toxins &#8212; before most have a chance to raise the issue themselves. This and other health-related questions form the basis of an Armywide post-deployment questionnaire.

&#8220;We are doing more testing,&#8221; said Capt. James Mancuso, chief of epidemiology at the U.S. Army Center for Health Promotion and Preventive Medicine-Europe in Landstuhl, Germany.

Mancuso said officials are not finding any significant exposure, however, to depleted uranium, a dense substance used in projectiles to improve armor-piercing capability.

But up and down the clinical chart, medical personnel are doing more these days to check and document a soldier&#8217;s health before and after deployment. The pace has accelerated in recent months to better capture baseline medical data on the waves of troops leaving and entering Iraq.

Officials say servicemembers are also more involved in the process, partly because they are better educated about possible health threats.

The effort to improve the process of collecting health and deployment data comes on the heels of a Government Accounting Office report that focused on 1,071 troops who deployed to Kosovo or Afghanistan between January 2001 and May 2002.

Released in September, the GAO&#8217;s review found the Army and Air Force not in compliance with Defense Department policies on health protection and surveillance. The report, based on data covering four stateside bases, noted deficiencies in health assessments, immunizations and record-keeping.

It also criticized the Defense Department for a lack of &#8220;oversight of department-wide efforts to comply with health surveillance requirements.&#8221;

The Defense Department concurred with the report.

The basis of the GAO review, the second in six years, is rooted in health problems that arose after the 1990-91 Persian Gulf War, giving rise to what is known as Gulf War syndrome.

One of the culprits, some say, was the use of depleted uranium by U.S. and British forces. DU is a byproduct of the enrichment process of natural uranium, and, because of its density, is highly effective in penetrating armored vehicles.

But a lack of deployment data frustrated efforts to fully investigate the matter, the GAO later found.

Today, troops wrapping up their Iraq tour are required to complete a four-page form that includes, among other things, a question about possible exposure to depleted uranium.

But, he adds, people need to keep things in perspective. Ingesting particles of depleted uranium certainly isn&#8217;t desirable, Kraft said, but he noted that people who smoke do their body more harm.

In a place such as Iraq, medical officials are just as concerned about other toxicants, from oil field emissions to lead paint. DU, Kraft said, &#8220;is on the low end of the totem pole&#8221; of things to worry about.

By anyone&#8217;s measure, the greatest threat of depleted uranium exposure occurs when a soldier has the added misfortune of being in a vehicle struck by a DU shell, possibly from friendly fire. Upon impact, a round will pierce the metal and then mostly vaporize, sending fragments as well as particles of DU oxides flying.

Matcek, the CHPPME health physics division chief, said the immediate threat soon dissipates and that even rescue personnel are not at serious risk when following basic safety standards. Troops who simply pass by are at no great risk of exposure, either.

He said just because troops were near inert DU munitions or pass by an impact site doesn&#8217;t mean they&#8217;re in danger.