'This is for real now' 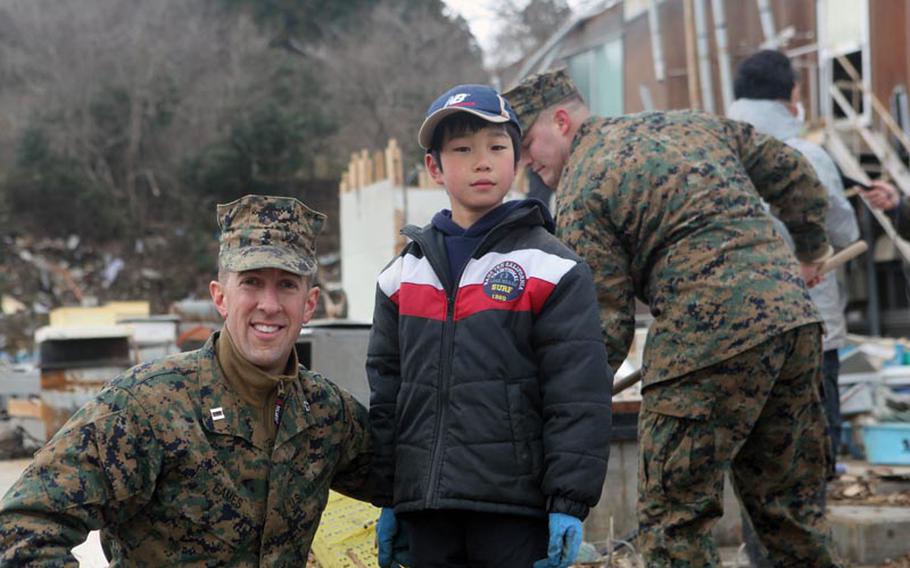 Marine Capt. Caleb Eames, from Okinawa's 31st Marine Expeditionary Unit, was reminded of his work at Ground Zero when he saw Ikuta Yataru, 8, digging through the dirt on Oshima Island after a tsunami hit Japan. (Courtesy of Caleb Eames)

Marine Capt. Caleb Eames, from Okinawa's 31st Marine Expeditionary Unit, was reminded of his work at Ground Zero when he saw Ikuta Yataru, 8, digging through the dirt on Oshima Island after a tsunami hit Japan. (Courtesy of Caleb Eames) 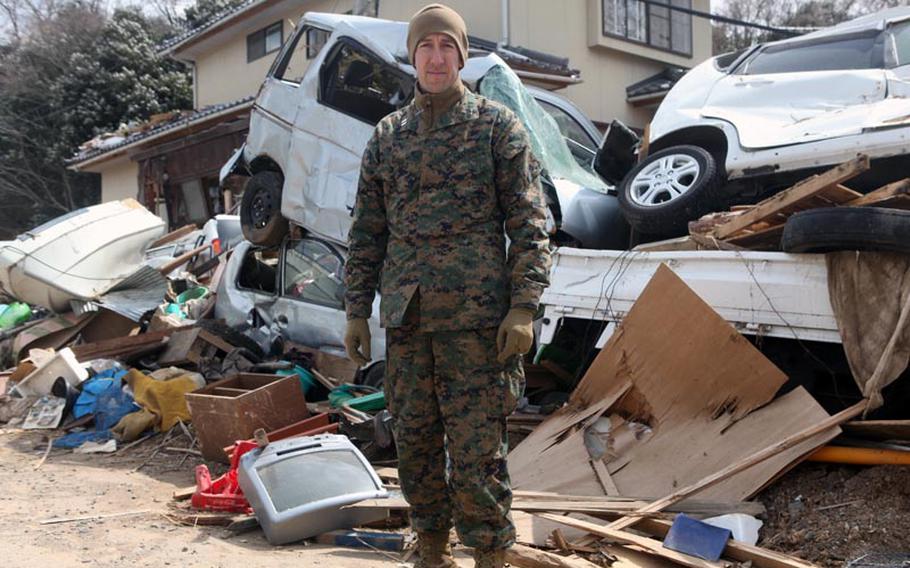 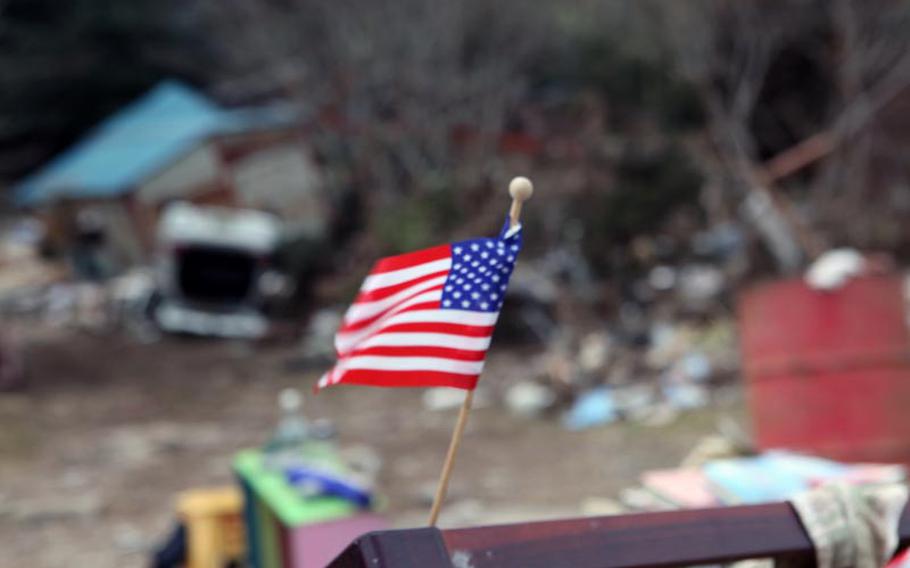 61p bs Courtesy of Caleb Eames An American flag tucked into the rubble in Japan. Eames recalls seeing a similar ray of hope amid the crumbling towers at Ground Zero right after the Sept. 11, 2001, attacks. ()

SASEBO NAVAL BASE, Japan &mdash; Caleb Eames will never forget where he was for what he calls our generation&rsquo;s &ldquo;JFK moment,&rdquo; Sept. 11, 2001.

Then a young Marine sergeant, Eames stood on the roof of 8th and I Marine Barracks in Washington D.C., watching smoke billow from the Pentagon.

&ldquo;I knew that was going to be our JFK moment,&rdquo; Eames said. &ldquo;I remember thinking that. I&rsquo;m going to remember this day for the rest of my life. This is for real now.&rdquo;

That day, as well as bearing witness to recovery efforts at Ground Zero in New York City several days later, helped mold him into who he is today, he says. Although there was devastation and death everywhere, he said he saw hope and determination and wanted to do his part.

Ten years later, the now 34-year-old Marine captain from Okinawa&rsquo;s 31st Marine Expeditionary Unit would once again encounter devastation and death, this time in Japan after the March 11 earthquake and tsunami. As he helped the Japanese dig themselves out, he saw the same hope and determination he had witnessed after the terror attacks on the Pentagon and the World Trade Center.

Eames said that America&rsquo;s ability to come together and rebuild after the tragedy 10 years ago serves as a ray of hope to the Japanese people that they, too, will recover.

&ldquo;It was definitely life-changing to be involved with those two events,&rdquo; Eames said. &ldquo;It becomes a part of who you are.&rdquo;

On Sept. 11 Eames was at the Marine barracks for a security briefing on the United Nations General Assembly in New York City. Besides Marines, State Department and FBI officials were in attendance. They concentrated on street maps of New York and discussed the World Trade Center&rsquo;s two giant towers.

Suddenly beepers started going off. Government officials left the room to take phone calls. They returned and turned on the TV, watching in horror as the second plane careened into the south tower.

They heard something had happened at the Pentagon. Eames and others headed to the roof.

The Marines passed out their weapons and took a defensive posture, Eames said. They set a perimeter in the streets around the barracks till all was clear.

The United Nations delayed their meeting but decided not to cancel it in a showing of solidarity for the lives lost. A week and a half later, Eames was sent to New York City for a security detail at the president&rsquo;s hotel. Eames made several trips to Ground Zero to meet the firefighters and rescue workers and offer encouragement.

Nearly two weeks after the towers fell, fires still raged, and he watched rescue workers digging through the rubble with their bare hands.

&ldquo;It was mind-blowing,&rdquo; Eames said. &ldquo;It was like nothing you expected to see on planet Earth.&rdquo;

Eames had joined the Corps in 1995, right out of high school, during a time of relative peace. After Sept. 11, his views on the service changed drastically. It was a sobering moment for the young Marine.

As he stood at Ground Zero, something hit him.

&ldquo;The sense of responsibility to take the fight to the enemy was definitely there,&rdquo; Eames recalled thinking. &ldquo;I knew the responsibility would fall on our shoulders.&rdquo;

Eames recalls seeing that ray of hope amidst the rubble. A small American flag had been on a fire truck that had been crushed by the crumbling towers. Someone had picked it up, dusted it off, and put it back upright next to the mangled truck.

&ldquo;I saw that and thought, &lsquo;We&rsquo;re going to come back from this,&rsquo;&rdquo; Eames said.

On March 11, a portion of the 31st MEU had just arrived in Malaysia aboard the USS Essex. The rest were onboard the USS Germantown and the USS Harpers Ferry off the coast of Indonesia. Immediately following the tsunami that rocked northeast Japan, claiming thousands of lives, the ships were on their way. They linked up at sea and headed to the devastated region.

On March 21, 2,200 Marines from the 31st MEU were given the green light to begin relief efforts on Oshima Island. They began to see debris in the ocean 30 miles out -&ndash; including the roofs of homes -- as they approached, Eames said. When they arrived on the ground, residents had been without power or water. It was freezing cold. The port was filled with debris so no ships could enter, and the homes in the area were reduced to piles of earth and rubble.

&ldquo;It was like a big hand came in and swept everything into the sea,&rdquo; Eames said. &ldquo;It was a scene that could hardly be described.&rdquo;

The Marines used their landing crafts and to shuttle power company trucks to the island. After power was restored, they began cleaning up the harbor so it could be opened. They brought in food, water and supplies. Eames said that his experiences on Sept. 11 and the days that followed came back to him when he saw an 8-year-old Japanese boy -- his home and family fishing business obliterated -&ndash; digging through the earth with his bare hands to salvage a few plates that were not broken.

He asked the Marines to help and began instructing them on what to do. Eames said that it was the same spirit, courage, determination and refusal to give up that he had witnessed 10 years before.

Eames matured after each event, he said. It even changed his view of his fellow servicemembers and what it means to serve. He said he looks at the young Marines in the 31 MEU and can&rsquo;t help but swell with pride.

The events of Sept. 11 inspired him and his fellow servicemembers to make a difference, on the battlefield or on humanitarian missions.

Eames has been back to Ground Zero several times and keeps a close eye on the recovery efforts in Japan.

&ldquo;This is a story for all of those who couldn&rsquo;t tell their story -- in New York and Japan,&rdquo; Eames said. &ldquo;They would want us to get back up and continue on.&rdquo;