This holiday, troops in Afghanistan thankful for surviving IED blast 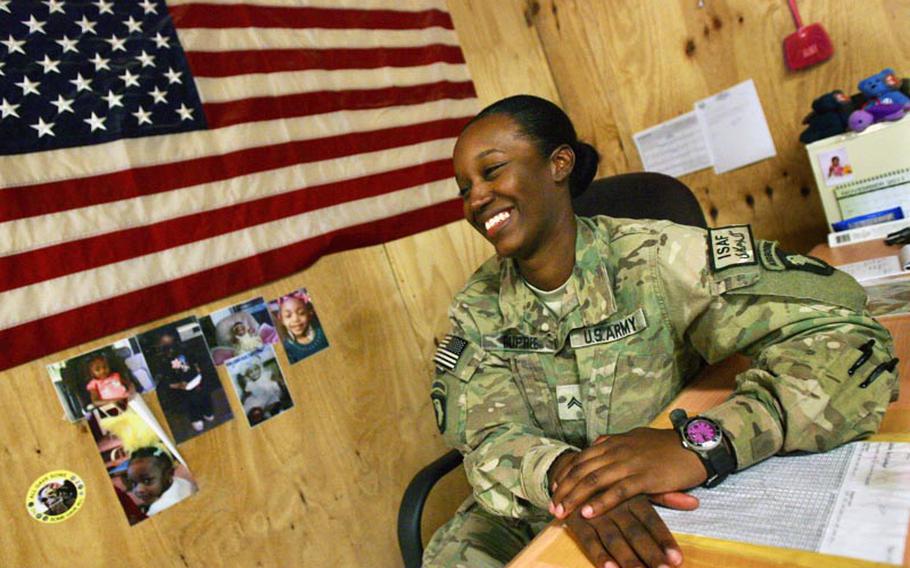 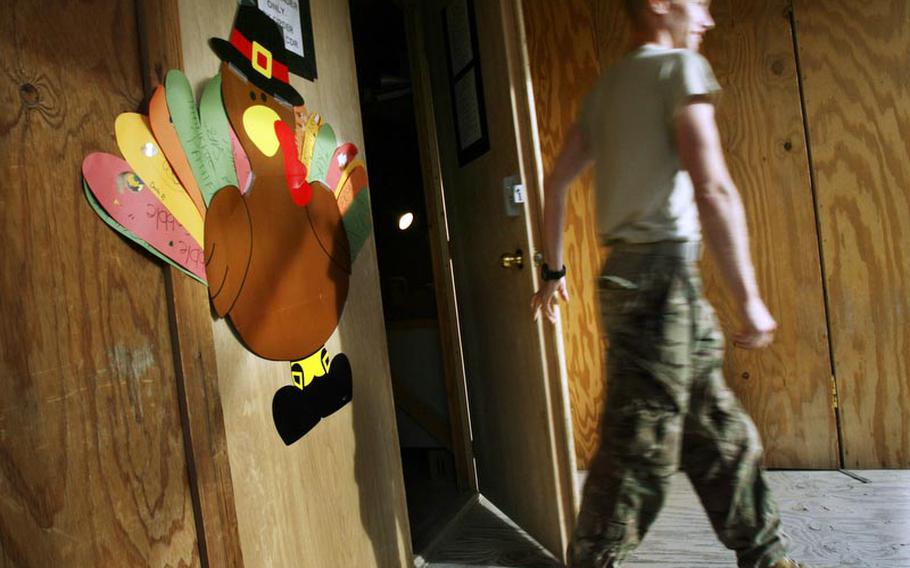 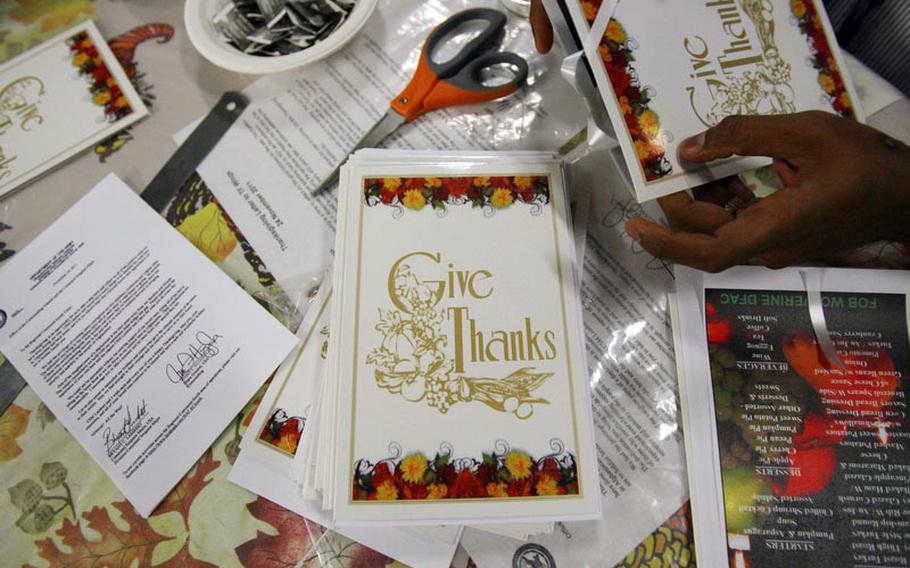 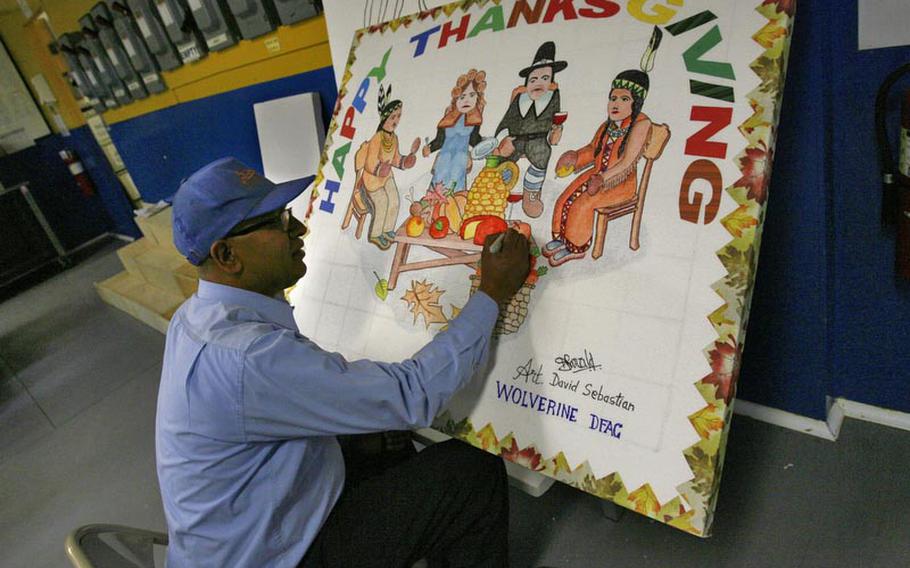 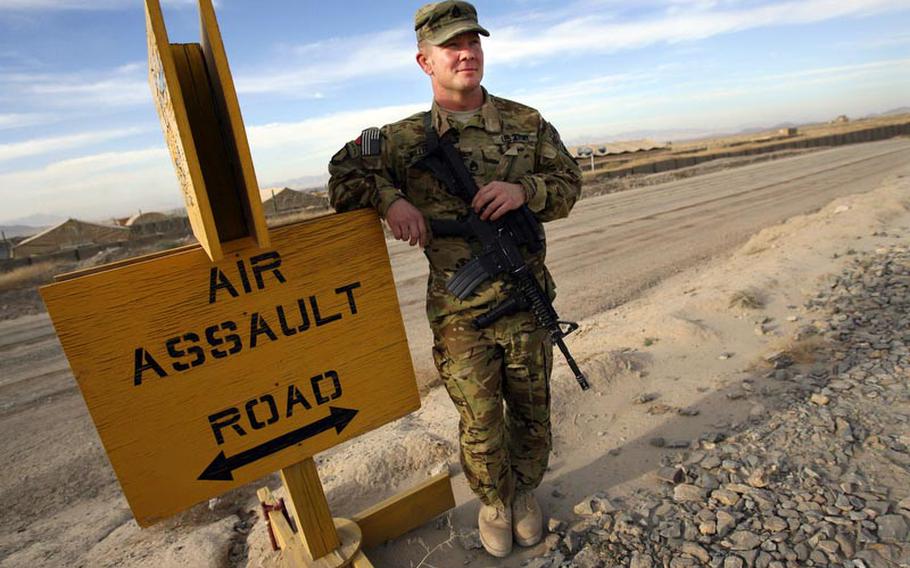 Buy Photo
Staff Sgt. Brian Williams of Headquarters and Headquarters Company, 4th Battalion, 159th Combat Aviation Brigade, 101st Airborne Division, pauses on Nov. 23, 2011 at Forward Operating Base Wolverine in Zabul province, Afghanistan. Though he&#39;s a bit homesick, Williams enjoys spending the holiday with his fellow soldiers nearly as much as being with his family. Laura Rauch/Stars and Stripes (Laura Rauch/Stars and Stripes) 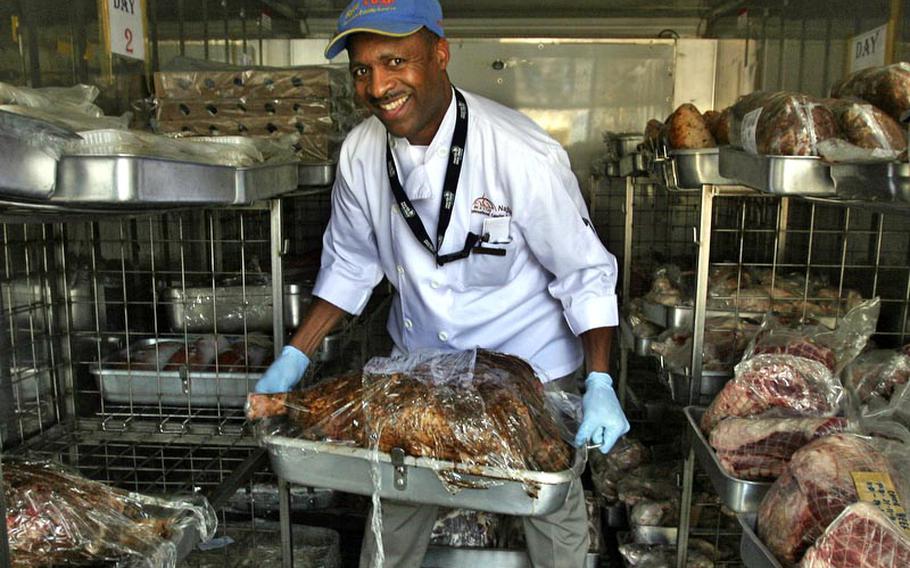 Buy Photo
Najlaa catering services Project Manager Darryl Overby holds up a beef thigh known as a steamship round, one of many main courses being offered for Thanksgiving, inside a refrigerator at Forward Operating Base Wolverine in Zabul province, Afghanistan on Wednesday. Overby, who worked in food services for 22 years in the Air Force before becoming a private contractor, says the dining facility will serve around a 1,000 meals Thursday. Laura Rauch/Stars and Stripes (Laura Rauch/Stars and Stripes) 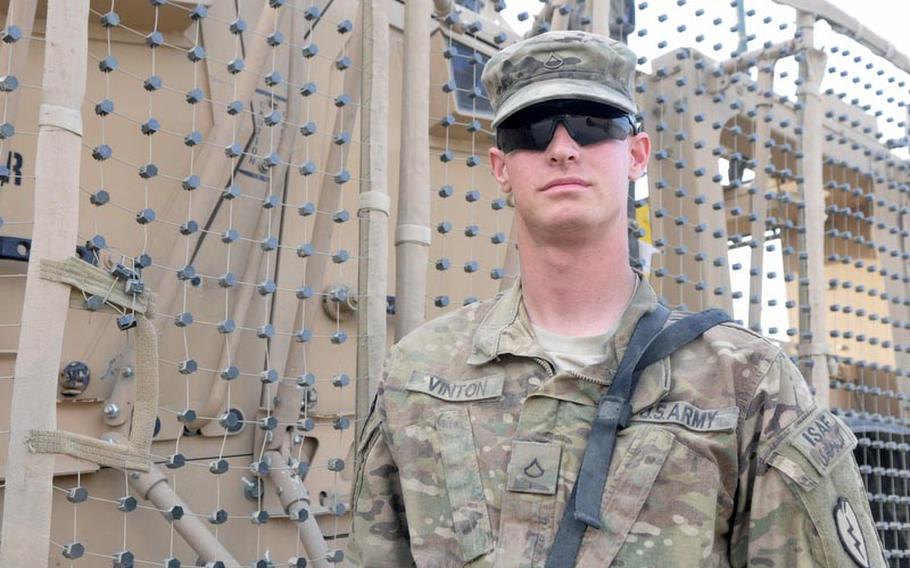 Buy Photo
Pfc. Derick Vinton was driving an armored vehicle similar to the one behind him in this photo when it struck an IED last month near the village of Goshta in eastern Nangarhar province. Vinton was unhurt, and the other three soldiers in the truck escaped with minor injuries. (Martin Kuz/Stars and Stripes) 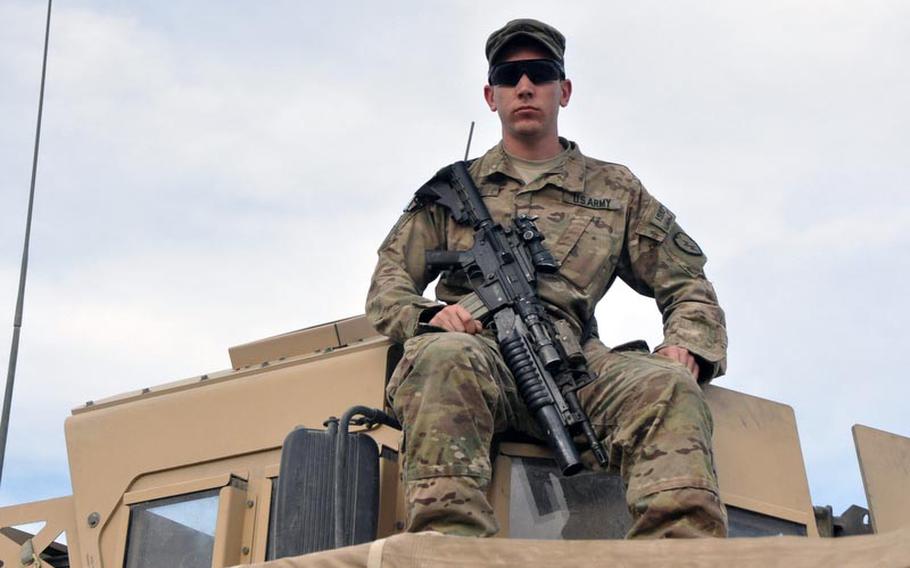 Buy Photo
Pfc. Brian Trance sits atop the turret of an armored vehicle at Combat Outpost Garcia near of the village of Goshta in eastern Nangarhar province. Trance, who mans the truck's .50-caliber machine gun, survived a firefight in May and earned a Combat Infantry Badge. (Martin Kuz/Stars and Stripes) 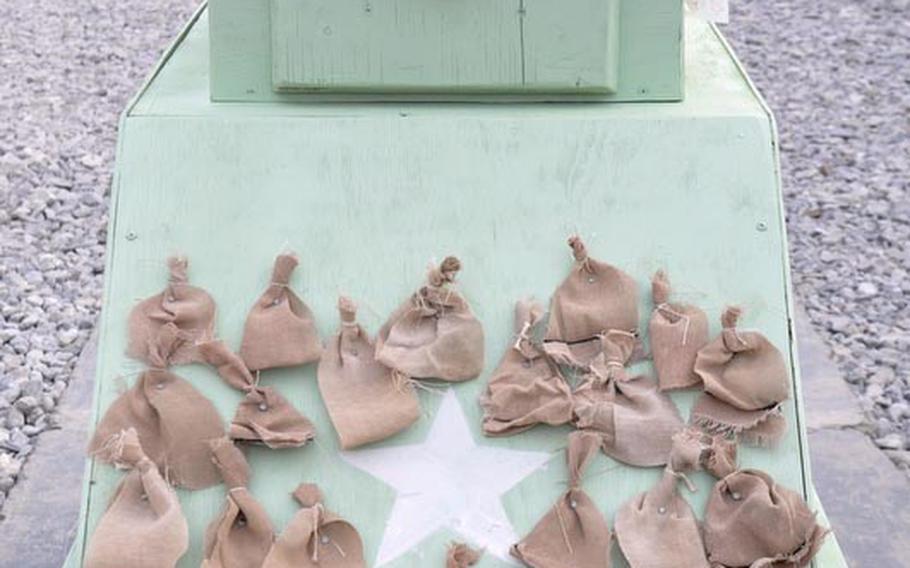 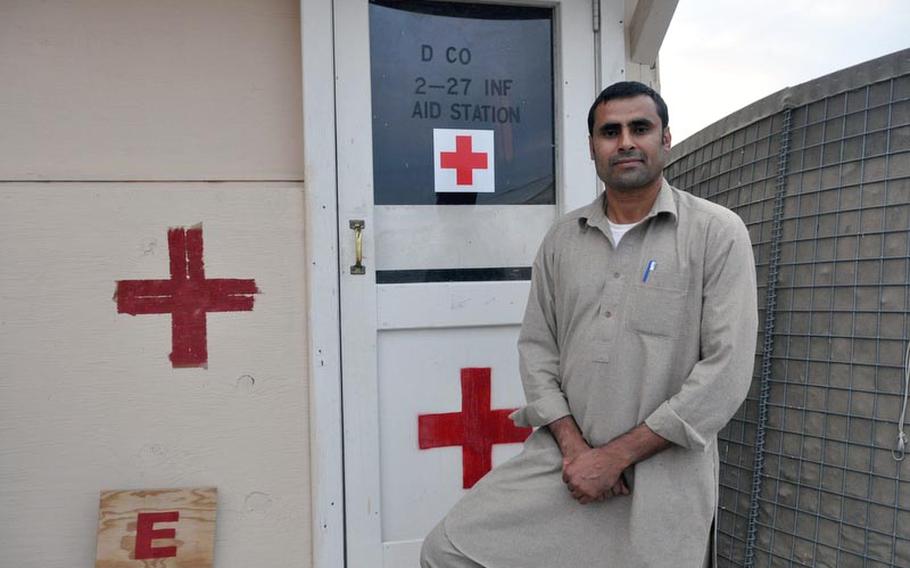 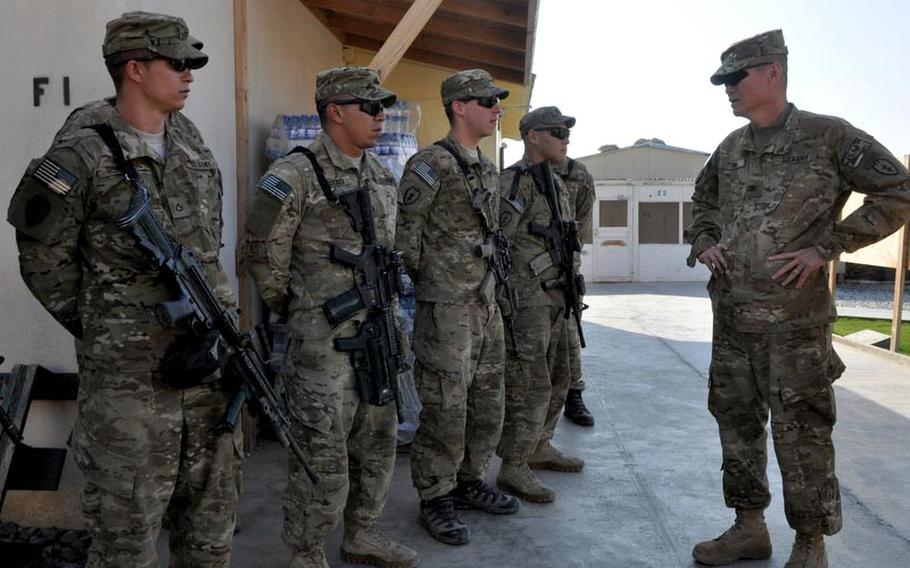 Buy Photo
Col. Richard Kim, brigade commander of the 2-27, addresses soldiers from Company D at Combat Outpost Garcia in Nangarhar province during a visit to the base on Wednesday. (Martin Kuz/Stars and Stripes) 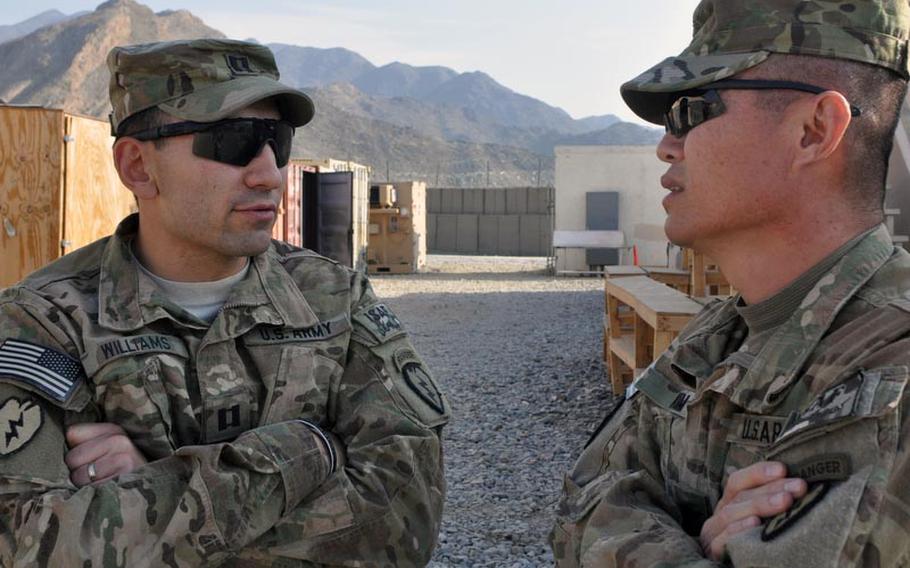 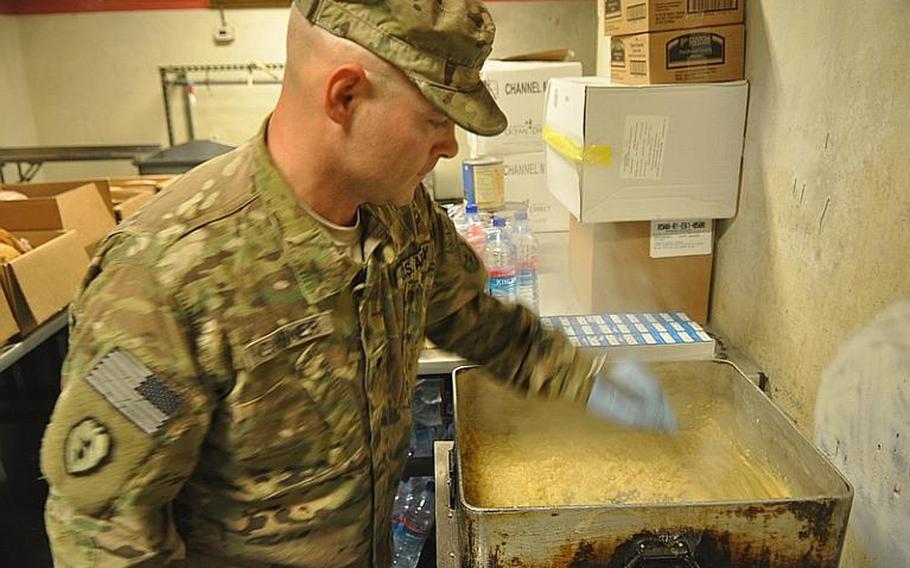 GOSHTA, Afghanistan &mdash; Pfc. Derick Vinton was looking forward to lunch as he drove an armored vehicle back to his platoon&rsquo;s base last month near this village five miles from Pakistan.

That&rsquo;s when the earth snarled and ripped open.

An 80-pound IED buried in the dirt road detonated beneath the truck&rsquo;s passenger side. The front wheels heaved upward several feet before landing with a violent stomp. Dust swallowed the cab as the air inside went black.

Vinton, 19, of Riverton, Wyo., heard only silence on his radio headset. A long moment passed. Then yelling erupted. The other three men in the truck were alive.

The four soldiers climbed out of the crippled vehicle. One had suffered a concussion; two had minor leg injuries. Vinton was unhurt.

So it is on this Thanksgiving that he offers gratitude for something that might sound strange to civilians in America but makes perfect sense to troops serving in Afghanistan and the longest war in U.S. history.

&ldquo;I&rsquo;m thankful for under-armor,&rdquo; Vinton said, referring to the steel plating on the truck&rsquo;s belly that absorbed most of the blast. &ldquo;It works. It&rsquo;s why we were pretty much OK.&rdquo;

Vinton belongs to Company D of the 2nd Battalion, 27th Infantry Regiment. The soldiers will celebrate the holiday at Combat Outpost Garcia in eastern Nangarhar province, finding solace in the kinship of their own while thousands of miles from home and loved ones.

&ldquo;There&rsquo;s no real substitute for family,&rdquo; Vinton said. &ldquo;But these guys are as close as you can get. They make it easier to be over here.&rdquo;

Pfc. Brian Trance, 21, of Kennesaw, Ga., has taken greater comfort in that war-forged bond since returning from leave in October.

&ldquo;I had a hard time when I came back &mdash; I missed my family, my girlfriend,&rdquo; he said. &ldquo;But I could talk to my buddies; they understand what it&rsquo;s like. I&rsquo;m grateful for them.&rdquo;

Col. Richard Kim, commander of the 3rd Brigade Combat Team, 25th Infantry Division, which the 2-27 falls under, sounded that theme while talking to soldiers during a brief visit to the base Wednesday afternoon, part of his pre-holiday tour of the eastern region.

&ldquo;Thanksgiving is a time when you draw on and find strength in each other,&rdquo; Kim said. &ldquo;This is a time to enjoy the camaraderie you share with one another, especially in these remote outposts.&rdquo;

A sense of togetherness prevailed among soldiers with the 159th Combat Aviation Brigade, 101st Airborne Division at Forward Operating Base Wolverine in Zabul province, where lobster tail will be on the Thanksgiving menu.

&ldquo;I&rsquo;m just thankful to be around all these guys,&rdquo; said Staff Sgt. Brian Williams of Yukon, Okla. &ldquo;You worry about them just like you would your brothers and sisters back home.&rdquo;

Others have a tougher time.

Cpl. Natasha Dupree is with Headquarters and Headquarters Company, 4th Battalion, of the 159th. She is a single mother on her second deployment, and has yet to spend a full year with her 3-year-old daughter, Kamille.

She plans to Skype with her daughter Thursday to say Happy Thanksgiving.

Holiday festivities at COP Garcia in Nangarhar were to begin Thursday morning with a parade of military-themed floats, including an amphibious-landing vehicle and a Sherman tank mounted with a barrel from a .50-caliber machine gun. Soldiers built the floats, each about the size of a bumper car, from scraps of wood and metal they scrounged on base.

After the parade they planned to gather in the dining hall for a turkey feast, with servers bringing food out to them, eliminating the usual zombie shuffle through the buffet line.

&ldquo;We wanted to do something a little different and make it more like a family thing,&rdquo; said Capt. Tom Williams, the Company D commander. &ldquo;(The soldiers) work hard &mdash; they deserve it.&rdquo;

The 2-27th deployed from Schofield Barracks, Hawaii, in April. Williams, 29, of Colorado Springs, Col., recognizes that the relative quiet in eastern Nangarhar contrasts with the heavy fighting endured by the rest of the battalion in neighboring Kunar province.

&ldquo;I&rsquo;m giving thanks for how things have been going here,&rdquo; he said. &ldquo;I wish the whole country was going as good as my area.&rdquo;

Yet despite the unrest that afflicts much of Afghanistan, Dr. Rafiullah Sadiq, an internist who works in the base&rsquo;s aid station, praises the changes he has seen since the first Thanksgiving that U.S. forces spent in his country. That was 2001, a month after they arrived to oust the Taliban.

&ldquo;There&rsquo;s a lot of good that has happened: new jobs, houses, schools, health clinics,&rdquo; said Sadiq, 34, a native of Jalalabad, 20 miles west of Goshta. &ldquo;There is still a lot to be done, and we still need help, but I&rsquo;m thankful that the country is getting better in different ways.&rdquo;

Villagers in and around Goshta, like Afghans across the country, live in a state of extreme deprivation that troubles Spc. Levon Ravel, 27, of Fresno, Calif. He has sought to help Afghans who work on the base in small ways, buying them iPods and DVD players.

During a holiday that in America tends to glorify abundance, even outright excess, Ravel, a practicing Buddhist, appreciates the chance to aid a nation in need.

&ldquo;It&rsquo;s hard to believe people could actually be so poor,&rdquo; he said. &ldquo;Being part of an army that&rsquo;s trying to make their lives better makes me grateful.&rdquo;

For soldiers in Afghanistan, however, perhaps the deepest gratitude they feel on any given day comes when a mission ends without harm befalling them.

Trance, who mans the .50-caliber gun on an armored vehicle in his platoon, recalled surviving his first firefight in May.

Rocket-propelled grenades landed within 20 feet of the truck as bullets snapped past his head. He fired more than 150 rounds in the direction of the unseen insurgents. His efforts earned him a Combat Infantry Badge.

&ldquo;I&rsquo;m happy to still be breathing,&rdquo; he said. &ldquo;Every time you go outside the wire, anything can happen. When we can finally go home &mdash; that&rsquo;s what I&rsquo;ll really be thankful for.&rdquo;

Stars and Stripes reporter Laura Rauch contributed to this story.