This Dagger went straight to the heart 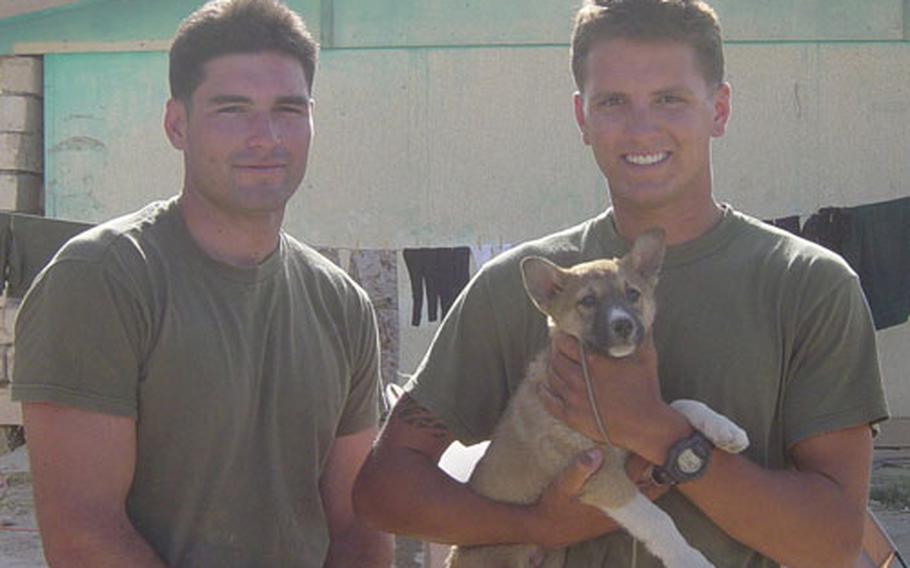 When Marine Sgt. Jared McAfee first saw the little puppy running beside his Humvee near the town of Diwaniyah, Iraq, during Operation Iraqi Freedom, it looked like a little ball of fur.

The puppy was dehydrated and hungry and not much bigger than a chew toy. He was nearly run over by passing vehicles.

McAfee scooped up the puppy, and he and passengers Staff Sgt. Patrick A. Sterling and Cpl. Michael Menkewicz gave it water and pound cake salvaged from a Meals, Ready to Eat.

The Marines named the dog Dagger for the call sign they were using at the time. Dagger soon found his way into the platoon&#8217;s hearts &#8212; and about 20 combat missions.

During the platoon&#8217;s assignments around Iraq, first as part of the 2nd Marine Expeditionary Force and now with the 1st Force Reconnaissance Company of the 1st MEF, Dagger has met generals and sniffed his way to a cache of missiles in Al Kut.

On a trip to Kuwait, he flew behind the controls of a C-130.

No one said the platoon couldn&#8217;t bring him onto the plane so they packed him into a dog carrier and hoped for the best.

Dagger&#8217;s been near gunfire and has been a guard dog since the very first night. He may be cute, but he also has an important task.

Growing up with a bunch of guys living out of a Humvee hasn&#8217;t given Dagger the best social skills.

Friends and family of the platoon send fetch toys, squeaky balls and treats.

The platoon of Marine reservists from Hawaii is part of the 4th Force Reconnaissance Company. It regularly moves between camps around Iraq and Kuwait, and Dagger always takes his special place in the Humvee &#8212; between the driver and passenger on top of a box of grenades during the war, but now atop a cooler.

Dagger has had all his shots in Kuwait and an examination by a veterinarian. When Sterling returns to his family in Oahu, he hopes to take the dog with him.