Thirsty after that run? Why not down a DMZ? 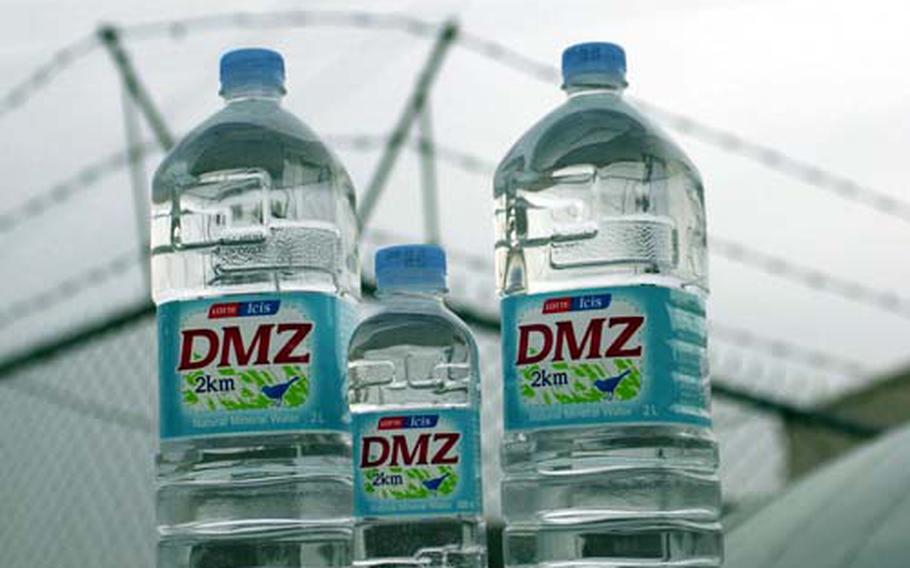 The makers of DMZ bottled water hope the name conjures up images of the natural beauty of Korea’s Demilitarized Zone and not the danger and tension. (Jon Rabiroff/Stars and Stripes)

CAMP RED CLOUD, South Korea &#8212; After a long run or grueling workout, U.S. servicemembers around South Korea will now be able to reach for a refreshing bottle of &#8220;DMZ&#8221; brand natural mineral water.

That&#8217;s right, bottled water named after the Demilitarized Zone &#8212; one of the most dangerous places on the planet, known for its land mines and the ongoing tension between North and South Korea.

Chun Woo-chul, spokesman for the Lotte Chilsung Co., which distributes the water nationwide, conceded that company officials &#8220;had fears and concerns about the negative image many people have of the DMZ, such as heightened tensions and conflict between the two Koreas, war, division, lethal mines and how the area is heavily fortified.&#8221;

However, he said, surveys showed that more people had a positive image of how the DMZ&#8217;s &#8220;ecosystem is the best in the world, that has been left untouched by humans for the past 50 years.&#8221;

&#8220;We decided there was no better name than (Lotte Icis) DMZ 2km to pinpoint the purity and cleanness of this water,&#8221; Chun said.

Indeed, ecologists consider the DMZ one of the most important natural areas in the world thanks to the fact that the strip &#8212; which is 2.5 miles wide and runs 155 miles from coast to coast &#8212; has been left unspoiled by humans since hostilities ended in 1953.

Chun said the name on the bottles is more than a marketing ploy. The water is drawn from inside the DMZ (the &#8220;2km&#8221; on the label) and bottled nearby, he said. In fact, the company needed special permission from the South Korea Ministry of National Defense to set up its pumping operation.

The DMZ water has been on the market for about three months, and sales have been so good company officials are talking about possibly distributing it overseas.