Things that go bump on the base Don’t look now, but a kneeling ghost was seen at the upper right hand window of Building 17. (Geoff Ziezulewicz / S&S)

Don’t look now, but a kneeling ghost was seen at the upper right hand window of Building 17. (Geoff Ziezulewicz / S&S) 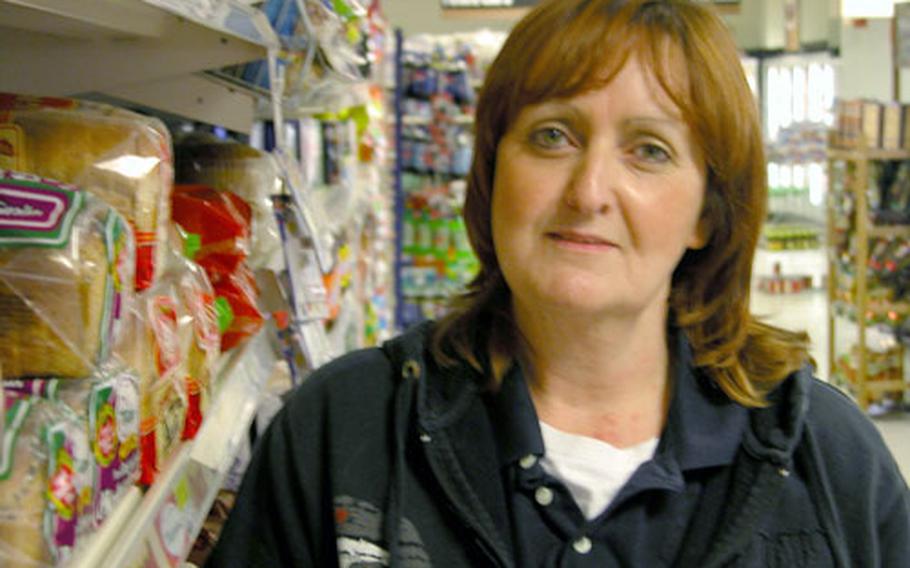 While working at the old commissary on RAF Mildenhall, Miri Cressey says she saw a loaf of bread and a clock fly through the air. (Geoff Ziezulewicz / S&S) After reports that a hangar on RAF Lakenheath was haunted, servicemembers painted the “Ghostbusters” symbol on its doors. (Geoff Ziezulewicz / S&S)

Miri Cressey already believed in spirits before she saw a loaf of bread shoot off the shelf while she worked at the old commissary on RAF Mildenhall.

Soon after, when a clock violently flew about eight feet from its place on the wall, she also took that in stride.

Whether the thought of ghosts at your base stiffens your neck hairs or makes you roll your eyes, an abundance of ghoulish tales and legends surrounds Air Force bases in England and on the island as a whole.

Cressey wasn&#8217;t alone at the supernatural commissary, which is now closed and known as plain old abandoned Building 127 these days.

Cressey said a former co-worker once took a photo of the building, and when it was developed, an unexpected guest had made itself apparent.

Another manager saw baloney fly out of a meat case one day, and he insisted it didn&#8217;t just plop out as the result of overcrowding, she said.

Most people working the graveyard shift experience their share of strange occurrences, and the crews who have worked at Pass 46, a jet hangar at RAF Lakenheath, have their own tale to tell.

According to those in the know, the ghost of a pilot occasionally appears at night and asks whoever&#8217;s there for a cigarette or a light. When the person reaches to fulfill the request, the apparition is gone.

The ghost is believed to be that of a pilot who accidentally ejected himself into the ceiling of the hangar 15 to 20 years ago. Whether they were protecting a supernatural tenant, or weren&#8217;t sure, base officials were unable to confirm whether a pilot had died in that fashion at Pass 46.

Regardless, a giant painting of the &#8220;Ghostbusters&#8221; symbol, a no-ghosts sign of sorts, has since been put on the hangar door.

Seeing a ghost can be a sensitive thing for an airman&#8217;s career, according to numerous airmen who only agreed to talk anonymously. Seeing a spook can make commanders question an airman&#8217;s mental acuity.

But the cigarette-bumming pilot isn&#8217;t the only ghost at Lakenheath. About five years ago, two airmen who were watching the perimeter fence surveillance camera reported a woman in white running along the fence inside the base.

Security forces, including a dog team, were scrambled to find the intruder. They found nothing.

One denizen of the base is known as &#8220;Feltwell Freddy.&#8221; According to one airman who didn&#8217;t want to be named, security has investigated rustling noises in the foliage near the fence line, as well as moans and blood-curdling screams. Nothing was found.

Building 17, the old officer&#8217;s mess, is a well-known haunted locale, Williams said. In the early &#8217;80s, a security member responded to the building for a noise complaint in the massive building&#8217;s east wing.

There was no noise, but a door was open upstairs, so the airman went to investigate.

Inside one room, by a corner window, Williams said, that airman found the possible culprit.

The security men told the kneeling man to stand up. The ghost stood up and walked through the shocked security forces member.

Needless to say, Williams said, it shook up the airman.

Legends also are told of the ghost of an evil witch who was burned to death centuries ago in the village of Feltwell. She now roams the fields of the village. There&#8217;s also a tree that airmen swear no bird will land on, and that has its own peculiar visitor on certain nights.

&#8220;When the wind is blowing just right, you can see this guy dangling in the moonlight,&#8221; Williams said of the ghost of a man who reportedly was caught stealing cattle and hanged centuries ago.

Despite his reservoir of supernatural Feltwell knowledge, Williams said he has never seen anything himself and that most of the stories are passed along second-hand.

Still, he said, he does enjoy giving the frights to new security forces airmen.