'Things could be tense' for soldiers in Kosovo 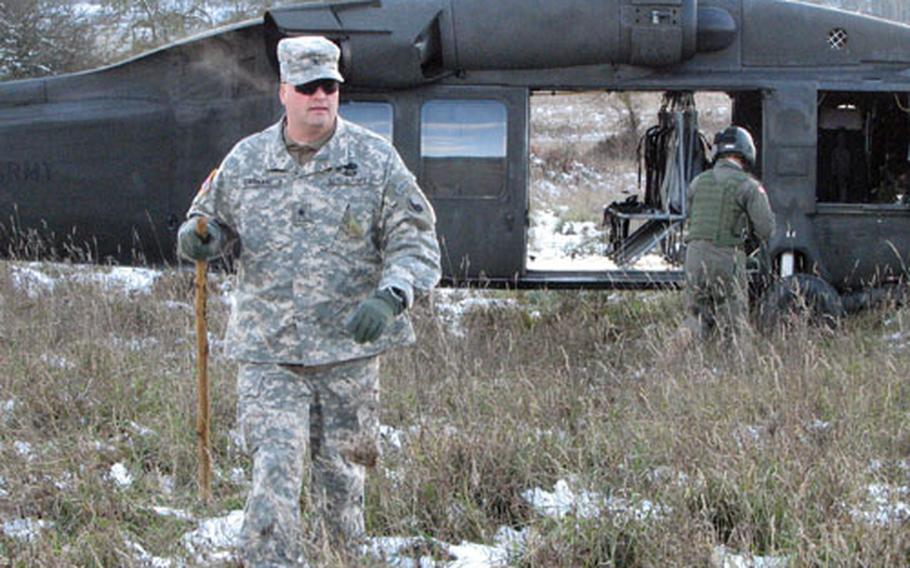 Brig. Gen. Douglas B. Earhart, commander of the Army National Guard’s 29th Infantry Division and new commander of Kosovo Forces Multi-National Task Force (East), exits his aircraft to tour the training area at Hohenfels, Germany, during KFOR 8’s mission rehearsal exercise in early November. He cautions that the next few months in Kosovo could be tense as the province’s future national status is decided. (Cotton Puryear/Courtesy of U.S. Army)

The latest rotation of U.S. troops to Kosovo will take charge of keeping the peace in the province just before it could become independent from Serbia, which is loath to let it go.

Earhart&#8217;s unit of some 1,500 soldiers &#8212; mostly Guard troops from Virginia, Massachusetts, 20 other states and Puerto Rico &#8212; is the eighth U.S. troop rotation to take part in a larger NATO mission working there.

Now the United Nations, which has administered the mostly Albanian province since a NATO bombing campaign expelled Serb forces in 1999, is poised to decide Kosovo&#8217;s status.

It delayed a recommendation on the matter last month to avoid inflaming Serbs, who view Kosovo, the center of a medieval Serbian state that fell to the Ottoman Turks in the 1300s, as their homeland. The Serbs will be voting for new leaders next month.

The U.N.&#8217;s delay led to some 2,000 Albanian Kosovars demanding independence to &#8220;attack U.N. personnel in the capital, Pristina, pulling down a concrete barrier &#8230; and hurling concrete blocks and an incendiary device at police officers within,&#8221; the release said.

The event could foreshadow further difficulties.

When the mission started, the U.S. troops that were sent to Kosovo to keep the peace between Kosovar Albanians and Serbs following brutal fighting and claims of ethnic cleansing were Germany-based soldiers from the 1st Infantry and 1st Armored divisions.

But after 2001, when the U.S. went to war in Afghanistan then in Iraq, USAREUR&#8217;s active-duty soldiers were deployed to those war zones. The Kosovo peacekeeping mission was turned over to the National Guard.

&#8220;They gave it to the Guard on recruiting and retention grounds,&#8221; said John Pike, director of GlobalSecurity.org, a Web site that provides information on defense, space, intelligence and homeland security.

That&#8217;s generally been true. According to Maj. Paul Pecena, spokesman for the 36th Infantry Division, which is just finishing its yearlong Kosovo deployment this week, the unit&#8217;s biggest challenge was forming a brigade-sized team out of soldiers from a variety of units &#8212; National Guard, Reserve and some active-duty &#8212; from the U.S. and six other countries.

Daily duties were carried out without the need of body armor or Kevlar and consisted of patrols in Humvees or on foot.

&#8220;We also had soldiers out in the communities assigned to Liaison and Monitoring Teams,&#8221; Pecena wrote. &#8220;Their job was to interact with the local government and talk to folks out on the street to see what their concerns were, then help them find a solution.&#8221;

But the protest in Pristina is likely a sign of further unrest &#8212; and worse, according to a private intelligence firm called Stratfor, which is based in Austin, Texas, and is sometimes called a &#8220;shadow CIA.&#8221;

&#8220;Three months from now, if Kosovo doesn&#8217;t have independence, the Albanians will rise up against the U.N. forces,&#8221; said Peter Zeihan, a Stratfor senior analyst.

On the other hand, if the U.N. does grant Kosovo independence, the Serbs will react, he said.

And according to the Stratfor report, &#8220;With most of the West&#8217;s deployable forces bogged down in Afghanistan and Iraq &#8212; the question is much starker: Can NATO and/or the United States even attempt to counter what will likely be near-simultaneous Serbian moves in Bosnia, Montenegro and Kosovo?&#8221;