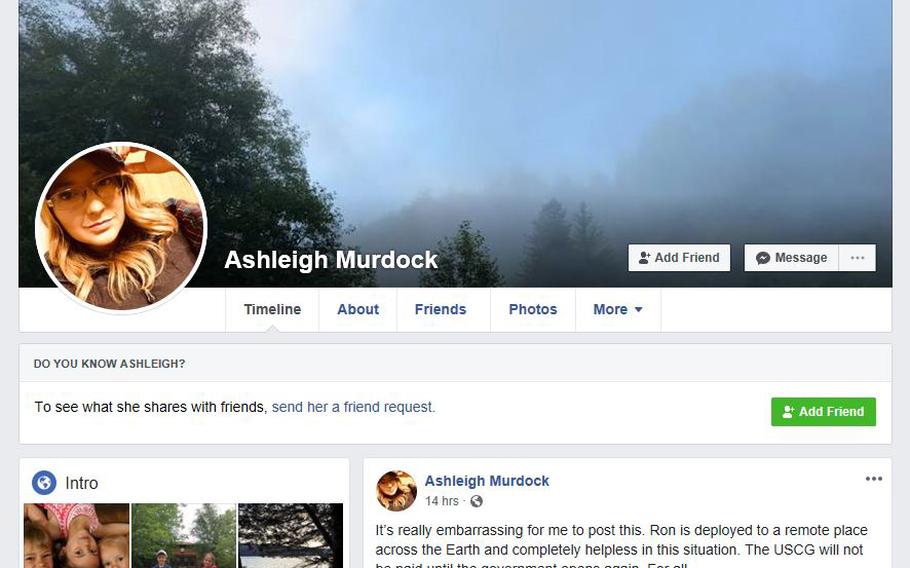 "This is really embarrassing for me to post this," Ashleigh Murdock wrote on her Facebook page as she told of how Coast Guard members, to include her deployed husband, were facing the prospect of not getting paid on Tuesday, Jan. 15, 2019, due to the government shutdown. (Facebook)

"This is really embarrassing for me to post this," Ashleigh Murdock wrote on her Facebook page as she told of how Coast Guard members, to include her deployed husband, were facing the prospect of not getting paid on Tuesday, Jan. 15, 2019, due to the government shutdown. (Facebook) 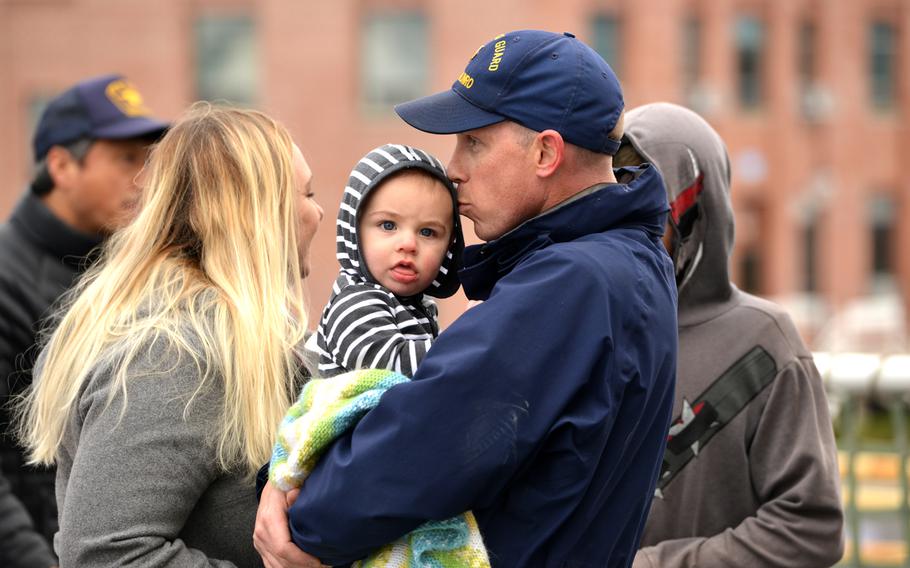 AUSTIN, Texas — The prospect of Ashleigh Murdock’s husband missing a paycheck from the Coast Guard couldn’t have come at a worse time.

The family of five relocated to Seattle nearly a year and a half ago and purchased a home. They rented their previous home in Maine to another Coast Guard family, but heavy rains last fall caused the basement to flood. Murdock said they spent their savings to repair the basement and to conduct mold testing that wasn’t covered by insurance.

Now Murdock is looking to pay two mortgages along with the rest of her family’s bills on the small income that she earns working with special-needs children in a local school district. Her husband, a 16-year member of the Coast Guard, is deployed as an electrician’s mate on the USCGC Polar Star, an icebreaker making its annual trip to open waterways near Antarctica for commerce.

“I have two teenagers and an 8-year-old. All I care about is just getting them fed and having gas to get to work so I can keep that paycheck,” said Murdock, 34. “It’s hard, because they know. The kids know about what’s going on. They ask for things and I have to tell them it’s too tight right now.”

Petty Officer 1st Class Ron Murdock is one of roughly 41,000 Coast Guard members bracing for the partial government shutdown to continue through the weekend and to deny them paychecks on Tuesday.

The potential for a shutdown began when Congress failed to pass a budget for portions of the federal government before a Dec. 21 deadline, stoked by a disagreement with President Donald Trump to fund his campaign promise of a wall along the U.S. border with Mexico.

Though the other military service branches — the Army, the Air Force, the Navy and the Marine Corps — are part of the Department of Defense, which has been unaffected by the shutdown, the Coast Guard falls under the Department of Homeland Security which is affected.

The lapse in funding also has led to the furlough of about 7,400 civilian workers of the Coast Guard and could affect the disbursement of pay for some 50,000 retired Coast Guard members and employees, officials said.

The White House and Democrats on Capitol Hill have met three times, but have failed to agree on funding for the wall or reopening any portion of the government. Trump has said he will not sign a spending resolution without $5 billion for border wall funding. Congressional Democrats are refusing to relent to the president on this issue.

Though Coast Guard officials were able to pull together the $150 million needed to cover pay for their Dec. 31 checks, the funds are not available for Tuesday’s payday.

“The Coast Guard will work to pay our workforce as quickly as possible immediately following a [fiscal year 2019] appropriation, continuing resolution, or passage of an alternative funding measure,” said Chief Warrant Officer 4 Barry Lane, a spokesman for the Coast Guard.

To ensure her family is fed, Murdock canceled their membership to the local YMCA, she cut cable television and froze one her children’s cell phones. She also has an appointment scheduled with a local food bank.

“Somebody asked if they could go to the store and buy groceries for me. I don’t want to do that,” she said. “Come February, I may have to take them up on that.”

Impact at the academy Across the service, some civilians and servicemembers are keeping the critical missions running, but in other instances work is going undone.

At the Coast Guard Academy in New London, Conn., cadets are considered active duty and will not receive their paychecks along with the staff and faculty, said Petty Officer 2nd Class Lauren Laughlin, spokeswoman for the academy. Classes will begin on schedule Saturday for the 1,100 cadets, but adjustments have been made to accommodate for furloughed professors.

About 160 of the academy’s 260 civilian employees were furloughed.

Several sections of a Coast Guard ethics class have been merged into one 150-student night class, Laughlin said. This deviates from the allotted class hours from 8 a.m. to 3 p.m. and the typical 20-student class size.

A one-credit course on Coast Guard history was canceled to allow for non-furloughed teachers to shift around and pick up the gaps left by other teachers who are furloughed. All seniors have already taken the required course, so it can be offered to younger students in a different semester.

The Spirit of the Bear awards ceremony scheduled for Jan. 7 was canceled, because of the shutdown, Laughlin said. At this annual event, students present awards to people they voted as someone who has helped cadets build character and grow into young officers. Some of those recipients are furloughed, so officials chose to postpone the event.

“We felt it would not be right to have the ceremony without everybody included,” Laughlin said.

Aside from payday, Tuesday is also the day admissions letters are set to be mailed for prospective cadets. Those letters will go out as scheduled, she said.

History of service The Coast Guard boasts it is the oldest, continuous sea-going service, because the Navy was temporarily disbanded in the 1770s. In its earliest formation as the U.S. Lighthouse Service, the military branch operated under the Treasury Department, according to its online history. It officially became the Coast Guard in 1915 under President Woodrow Wilson. Two years later, during World War I, it moved into the Navy Department.

It bounced between these departments before landing in the Department of Transportation in 1967, and then finally into the newly formed Department of Homeland Security in 2003. Worldwide, it’s members ensure U.S. shipping lanes remain open for commerce. Domestically, the Coast Guard protects America’s waters environmentally and physically. It’s also there to keep Americans safe from drowning. On average, Coast Guard members save 10 lives a day, Laughlin said.

Those members also deploy alongside the other military branches. They have participated in all of America’s wars, including in post 9/11 combat in Iraq in Afghanistan. Most recognizably to other branches, it’s the Coast Guard that inspects packed shipping containers before they are sent back home.

“Everybody knows there are five military branches – they say Army, Marines, Navy and Air Force. They only say four,” Laughlin said. “Just as the other branches, we have a desire and need to serve. We want to help. We want to make a difference.”

Just like the other branches of the military have a mutual aid society to provide support for servicemembers in times of financial emergencies, the Coast Guard members can turn to Coast Guard Mutual Assistance. The nonprofit has pledged to help all members at pay levels of E-5 and below – about 22,000 members of the workforce during the shutdown.

“We’re getting calls of uncertainty,” said retired Rear Adm. Cari Thomas, CEO of mutual assistance. So far, as members watch the news and make plans to miss pay, she said they’ve already received a small number of requests from servicemembers overseas or deployed.

A separate Coast Guard employee program, Coast Guard Support Program, received backlash this week for a tip sheet encouraging furloughed civilians to host a yard sale or become a mystery shopper to earn extra income during the shutdown, the Washington Post reported. The tip sheet has since been removed from its website.

The Coast Guard also has received calls from people asking what they can do to support or raise awareness of the ongoing issue with pay. Thomas helped Army veteran Evelyn Cowley host a fundraiser at her ranch outside of Camp Lejeune, N.C.

“We don’t have the cash flow, especially just starting up (our ranch) right now to make large donations ourselves that would make a difference,” Cowley said. Through their fundraiser on New Year’s Eve, Cowley and her husband, a Marine Corps veteran, felt they helped bring in some donations, but more importantly awareness.

“That was really our main goal. Just because you’re getting your paycheck this month, doesn’t mean everybody is. Most people I talked to in this area, they didn’t know that the Coast Guard wasn’t getting paid until we opened our New Year’s Eve party to the Coast Guard.”

Back in Seattle, Murdock said she feels helpless and stuck in the middle of this entire situation – as if her family’s much-needed income is being held ransom.

Earlier this week, she called the office of Senate Majority Leader Mitch McConnell, R-Ky., to ask that he bring to the floor a bill that would pay the Coast Guard. Other than that, she feels helpless. She worries her husband will come home in the spring and find himself in financial ruin because bills went unpaid for however long this shutdown lasts.

“Everything we have, we work hard on doing it on our own. It feels like it’s all just falling apart. It’s out of our control,” Murdock said. “Right now, we’re OK, but they’re putting us in a very difficult spot. It’s already stressful enough to have my husband deployed, to have three kids to care for and a full-time job.

“I’m doing my best to hold it all together, but things are slipping.”