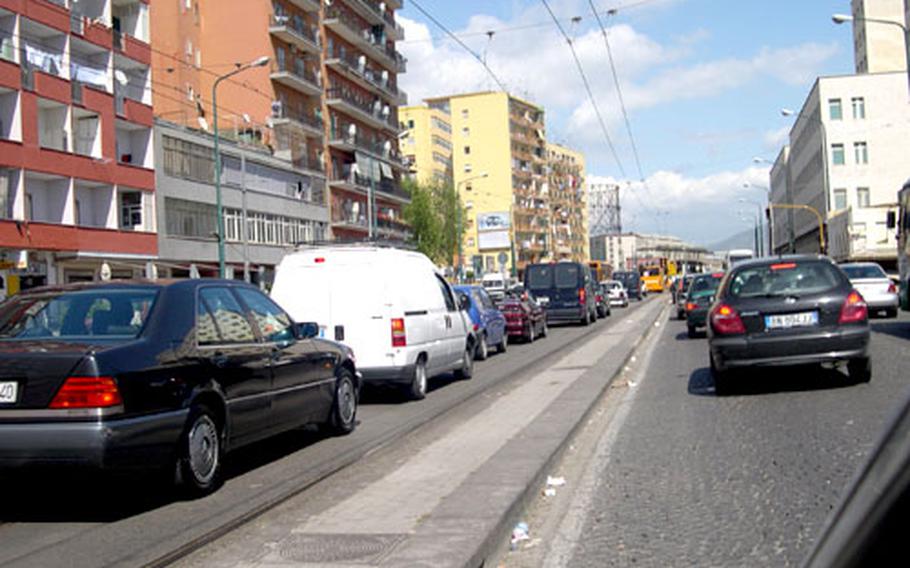 Traffic in Naples can never be called orderly, as seen here by the cars packing the off-limits transit-only lane. Add cobblestone streets, windshield washers, tissue paper salesmen and the occasional thief or carjacker, and Naples becomes a challenge for drivers. (Jason Chudy / S&S)

From 2001 through 2004, there were 17 carjackings and three attempted carjackings in the Naples area, said Lt. Cmdr. Lisa Braun, base spokeswoman.

The con usually involves two people, one in a vehicle and one waiting along the road.

Parsons said he didn&#8217;t listen to his own advice. In March, he was driving near the airport at 6:30 a.m. when a man in a car motioned that something was open on his 2002 ZR2 Chevy Blazer. Parsons, thinking his spare tire was loose, jumped out.

About 100 feet away, the man in the car tried to lure Parsons to him.

Parsons figured something was up, and went back to lock his Blazer. The man on the fence jumped into the other man&#8217;s car and they sped away.

And with warmer weather bringing out mopeds in droves, Parsons said women should keep purses behind the seat, not on the seat or in their lap. Keep windows up and doors locked. In one incident, a thief on a moped snatched a sailor&#8217;s Rolex off her wrist.

Parsons said if a driver has to pull over, do so in a busy, public place.

When Petty Officer 1st Class Rosemary Noerr&#8217;s car started making a strange noise, that&#8217;s what she did. It was 9:30 a.m. in February, and she had just dropped her 3-year-old son off at school in Varcaturo.

But Noerr, 25, of Livermore, Calif., left the car running while she got out to investigate.

&#8220;A car that had been behind me drove past and backed up and was pointing at something on the ground,&#8221; she said. &#8220;With my back turned, another guy jumped in my car. The other guy who had been pointing took off after him, and I was left standing in the road with nothing.&#8221;

Parsons said most of the crime is nonviolent and doesn&#8217;t involve weapons. But there are some exceptions.

Petty Officer 2nd Class Shayla Dalton had a gun pulled on her. She was driving a rental car on an afternoon in April 2003 when she was hit from behind and struck a guardrail near Lago Patria. The man who hit her tried to coax her out of the car.

She refused and another man tried to open the passenger door. He pointed a gun at her.

But Dalton said she made a mistake &#8212; she reached for her phone as she was getting out, and one of the men punched her in the face. She punched him back before he made away with the car.

She flagged down a Carabinieri officer, who thought the blood on her clothes was hers. It wasn&#8217;t.