They tossed him teddy bears 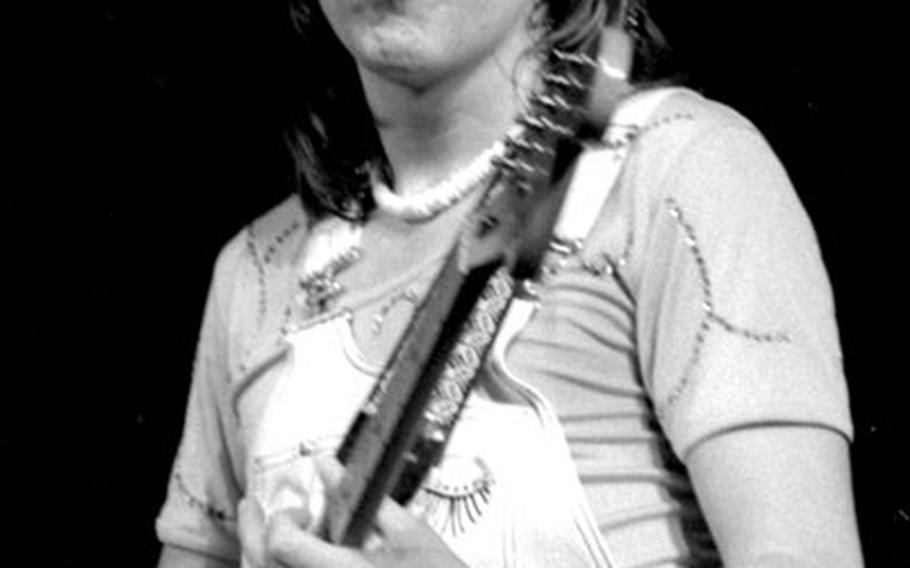 Buy Photo
David Cassidy at the Jahrhunderthalle in Frankfurt in May, 1974. (Loy Westberry / ©Stars and Stripes)

BABY-FACED DAVID Cassidy, who has just toured Germany, must have quite a collection of stuffed animals by now.

His squealing, squirming female fans &mdash; mostly 12 to 16 year olds have been tossing them to him on stage for three years now.

And there's no sign that the teddy-bear barrage is about to come to an end, either.

DAVID IS GETTING older &mdash; he's 16 going on 25 &mdash; but his audiences aren't, despite the fact that two years ago his managers were casting around for ways to attract a more mature following.

At the recent concert at the Frankfurt Jahrhunderthalle, there was the usual mass of intense little girls. (Like their American counterparts, most of these German bubblegummers were introduced to Cassidy through the Partridge Family TV series that has been running on the German tube for some time now.)

When Cassidy, their star of stars, bounded on stage wearing a white jump suit, they greeted him with the usual piping, teenybopper shrieks of girlish joy.

DAVID, WHO GOT his start as a singer while playing a bouncy, sweet-faced 16 year old. on the TV series which stars his stepmother Shirley Jones as the mother &mdash; acts pretty girlish himself on stage.

To an older more critical eye, the rear wriggling bumps and grinds that punctuate his performance look pretty feminine, indeed. But the teen-agers in the audience evidently didn't see it that way.

Among the numbers Cassidy performed at the Frankfurt concert were rock-oriented "I'm a Clown," "Two-Time Loser" and "Rock Me, Baby." All were recorded a couple of years ago during his push to attract an older following. (The majority of his selections, however, are still pure boy-girl pop songs.)

FOR THE "CLOWN" number, Cassidy cavorted around in a mask &mdash; looking a bit like one of the stuffed animals thrown his way. The bit brought giggles from the girl fans.

There's no denying that Cassidy really works to put on a good show. He performs every minute and unlike most of the pop-rock stars doesn't have a naturally big voice, so he really has to extend himself.

At the Frankfurt appearance, he was already haying problems. His managers, barricading the backstage to autograph seekers, explained he was suffering from a cold.

How long can Cassidy keep up the pace of being a teen-age idol? Where can he go from here?

Evidently, Cassidy, one of the highest priced entertainers on the concert scene at present, has been mulling over these questions himself. His campaign to become more than a teen star hasn't seemed to really come off ... he's getting up there in age.

The word is that he's going through scripts now, looking for the 'right' role &mdash; planning to sometime soon go back into movies. Maybe that's not a bad idea.