They're kids, but their attitude is professional 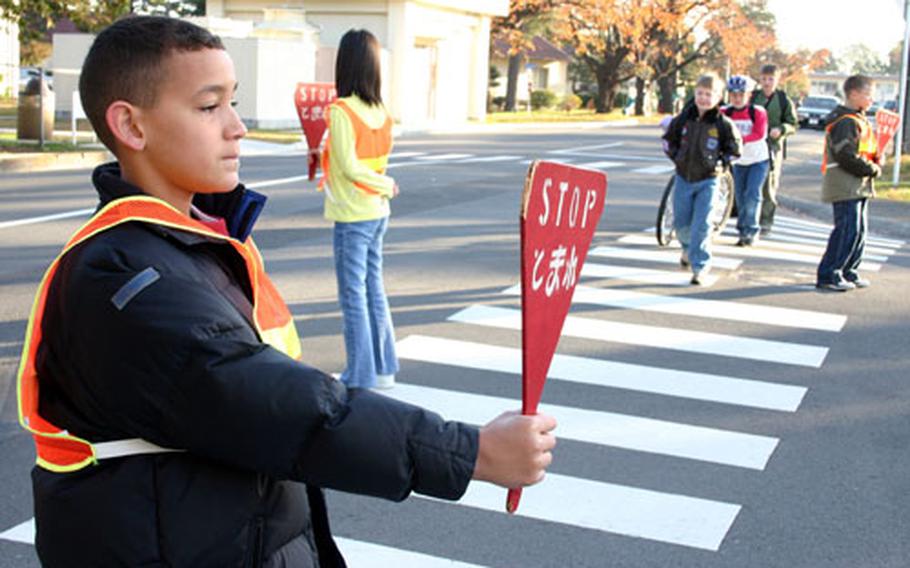 ATSUGI NAVAL AIR FACILITY, Japan &#8212; Every day, 50 youngsters help to guard the safety of their peers, keep order on the playground and hoist and lower the flag in a traditional ceremony.

The members of the Shirley Lanham Elementary safety patrol don&#8217;t just direct pupils and parents. They bring a level of professionalism to the job.

They stand at attention, march to and from the center crosswalk in a methodical progression and hold their stop signs high.

The good military bearing creates a level of professionalism that helps the kids take their role seriously and keeps them motivated, Palmer said.

The patrol is voluntary; the students&#8217; reward is getting treats on Fridays, provided by Palmer, and two parties a year.

They rotate through several jobs &#8212; road patrols at crosswalks to stop traffic for walkers, roving patrols on the &#8220;red top&#8221; playground, and raising and lowering the flag.

The youngsters carry citation books, just like real masters-at-arms. They record the name or license-plate number of anyone who breaks a rule and turn that information over to Palmer.

The patrols take their responsibility seriously. They have had no problem ordering adults &#8212; politely, of course &#8212; to walk in the correct places.

The squads of fifth-graders are led by sixth-grade officers &#8212; a captain and two deputy lieutenants &#8212; who enforce discipline and keep order in the ranks.

The responsibility of leading the patrols is tremendous.

She notes that this year, Palmer&#8217;s introduction of military standards such as marching and pivoting gave the squads something to be proud of.