They may be in Japan, but many adhere to stateside Thanksgiving traditions 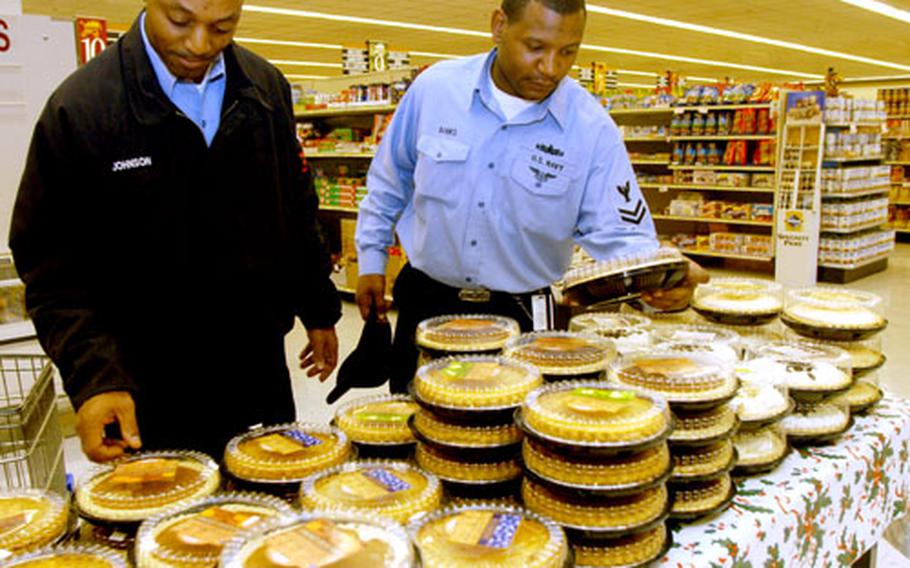 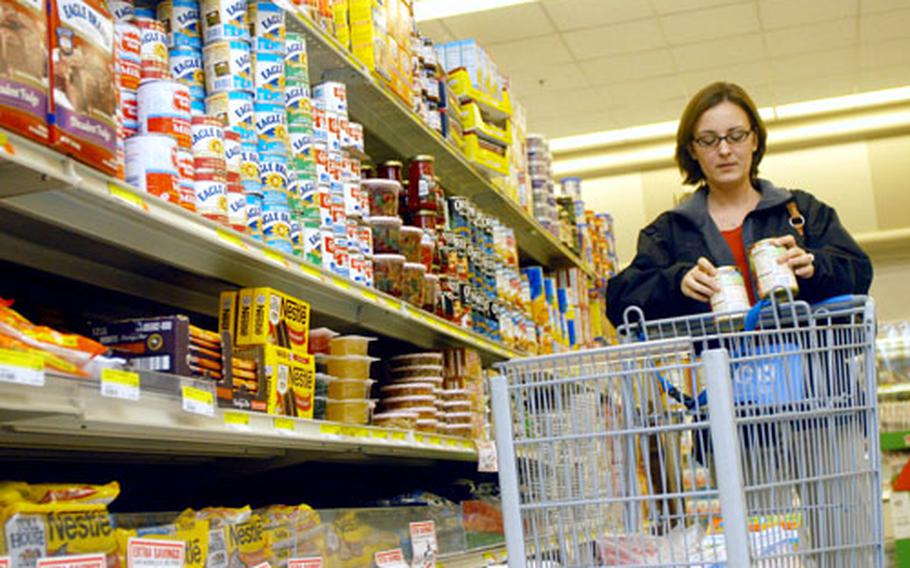 Jessica Sutton fills her cart with sweet potato pie preparations in the commissary at Yokosuka Naval Base, Japan. (ALLISON BATDORFF/STARS AND STRIPES) 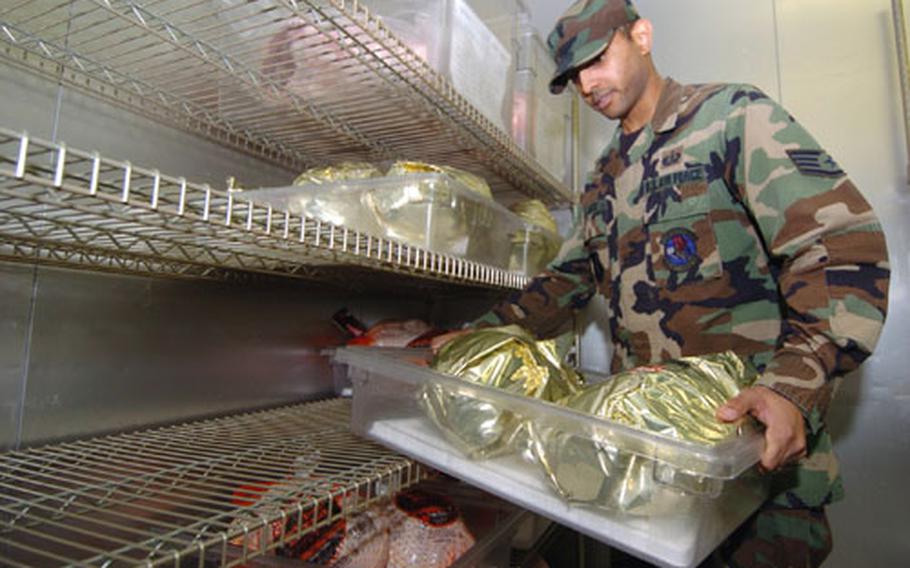 Staff Sgt. Antonio Mack, from 374th Services, pulls turkeys out to thaw at Samurai Café on Yokota Air Base, Japan. Thawing takes an hour for each half-pound. This is Mack&#39;s 9th Thanksgiving in the Air Force; he&#39;s cooked more than 50 turkeys in his time in the service, including the ones for his family. (Christopher B. Stoltz / S&S) 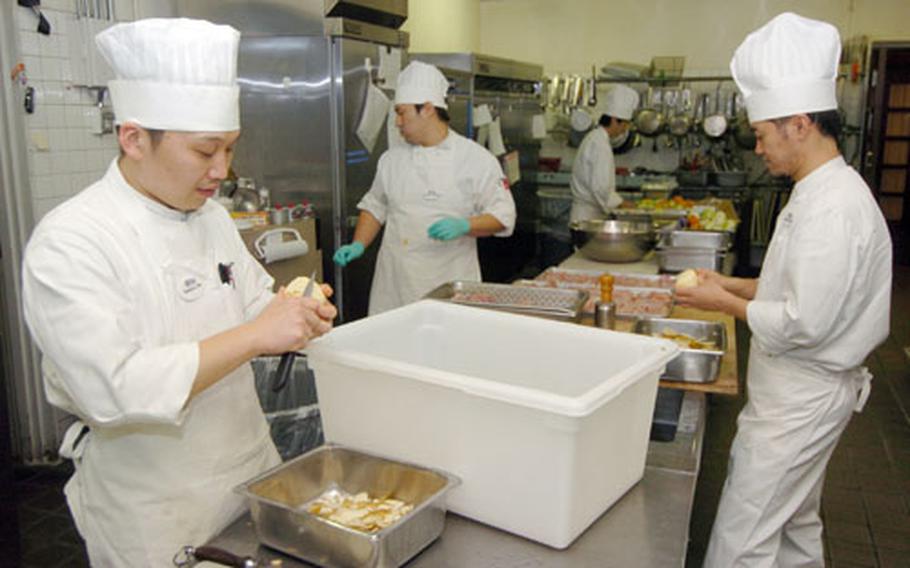 Susumu Ono, Masahiro Mukuta and Kazuhito Ebina prep food for Thanksgiving. The cooks are to prepare 400 meals at the Officers Club on Yokota Air Base, Japan. (Christopher B. Stoltz / S&S) 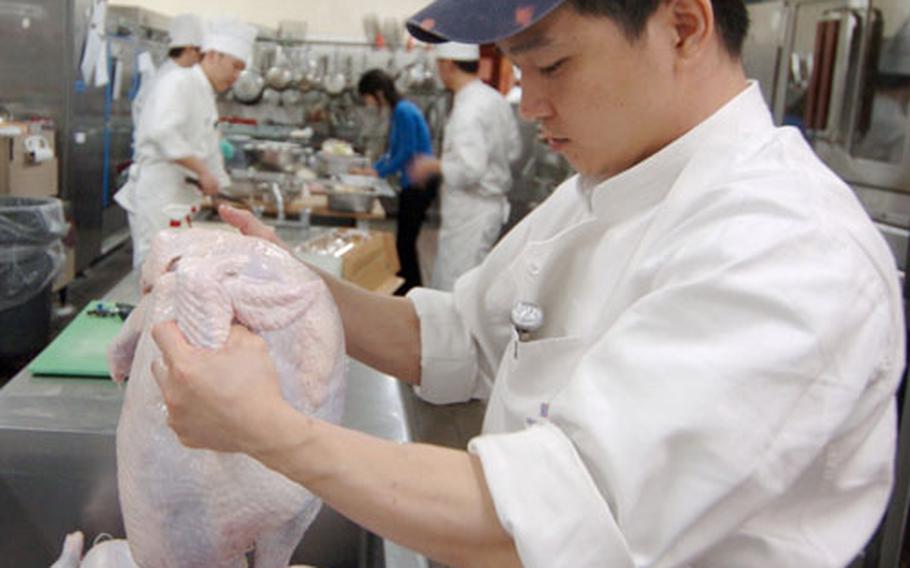 Hiroyuki Matsuzaki works the turkey station on Tuesday in preparation for Thanksgiving. Matsuzaki had to cook 17 turkeys to help his other cooks prepare for 400 meals that will be cooked at the Officers Club at Yokota. (Christopher B. Stoltz / S&S)

It begs the question: How do Americans celebrate Thanksgiving in Japan? With sushi and sumo? Or do they try to translate the traditional pack-it-on-athon into a new culture?

According to Yokosuka Commissary&#8217;s Store Director Totolua Ripley Jr., Americans cleave to the time-honored feeding frenzy if it all possible.

His grocery list? 24,000 pounds of turkey, 8,500 pounds of ham, 600 pumpkin pies, 850 pounds of Cool Whip, and 400 gallons of peanut oil for trendy deep-fried fowl. That&#8217;s what went from shelves to shopping carts last year. This year, once the USS Kitty Hawk returns, they expect to sell at least that much if not more, Ripley said.

Some Thanksgiving trivia from the aisle: They sell twice as much jellied cranberry sauce as the berried variety and &#8220;mince pies&#8221; and fruit cakes are decidedly out of vogue, Ripley said.

&#8220;Everyone is digging in the fridge and checking out the high-definition television sets for Christmas,&#8221; Ripley said.

Even though his wife is Japanese, Petty Officer 1st Class Jason Gromacki is doing the whole sit-down dinner with the family, plus picking up a few &#8220;Thanksgiving orphans&#8221; to share the feast, he said.

&#8220;My wife doesn&#8217;t understand Thanksgiving but we still do it,&#8221; Gromacki said. &#8220;Christmas is usually when you stick to the family, but Thanksgiving is more of a time be with lots of different people, get together and enjoy the camaraderie.&#8221;

On the other hand, after 13 years in the military, Petty Officer 1st Class Daniel McGowan has become Thanksgiving deprogrammed. He also has a Japanese wife, but instead of spending the holiday cooking and eating, they use the time off to get out of town, he said.

Petty Officer 3rd Class Socorro Huynh opted to give cooking a try and was carting around a turkey with the trimmings for her first Thanksgiving in Japan, she said.

It will be a first for spouse Peta Kosnar too &#8212; her first Thanksgiving as an American citizen, as the Australian was naturalized a month ago, she said. But that doesn&#8217;t mean she was going to cook, she said.