‘They hate Saddam … they hate Americans’ 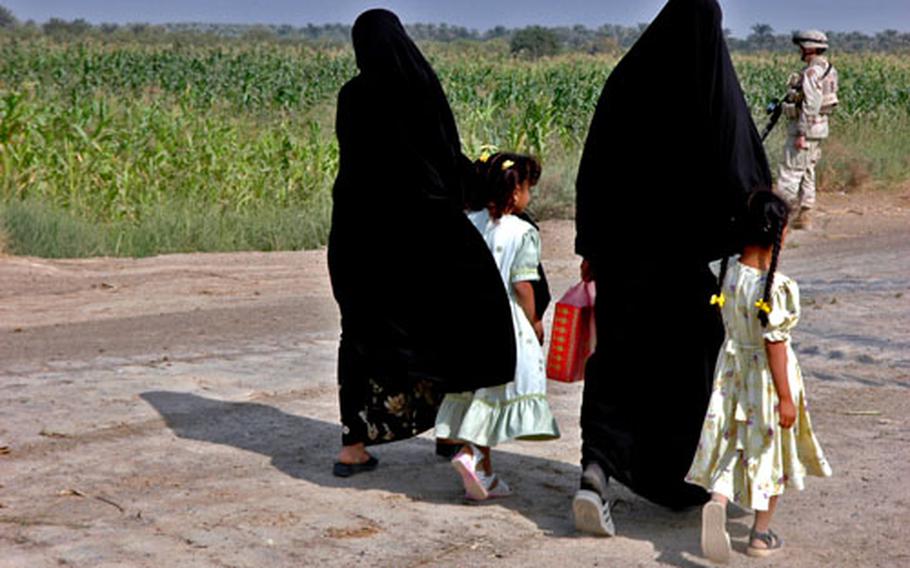 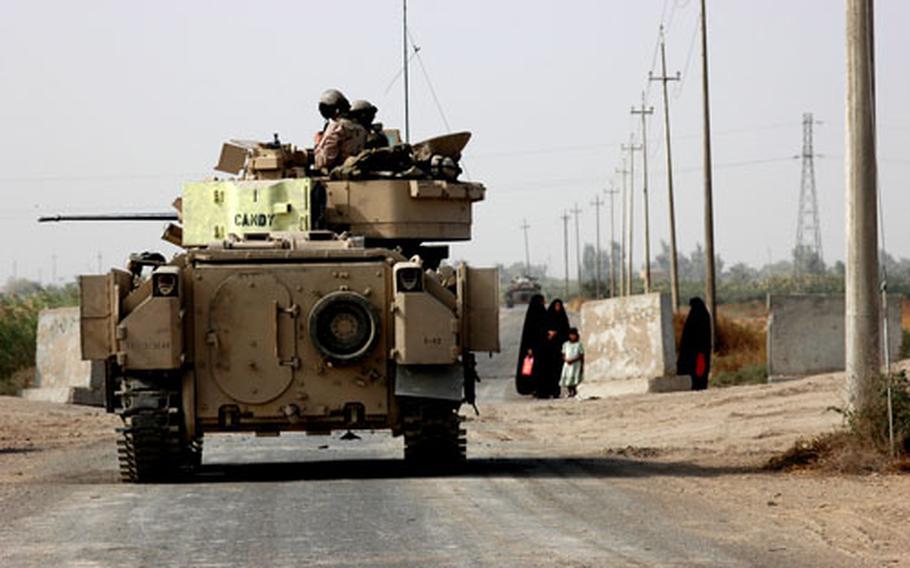 Locals in the area just south of Baghdad have an uneasy relationship with soldiers. Here, women wait behind a barrier, watching troops clear a path in a road. (Anita Powell / S&S) 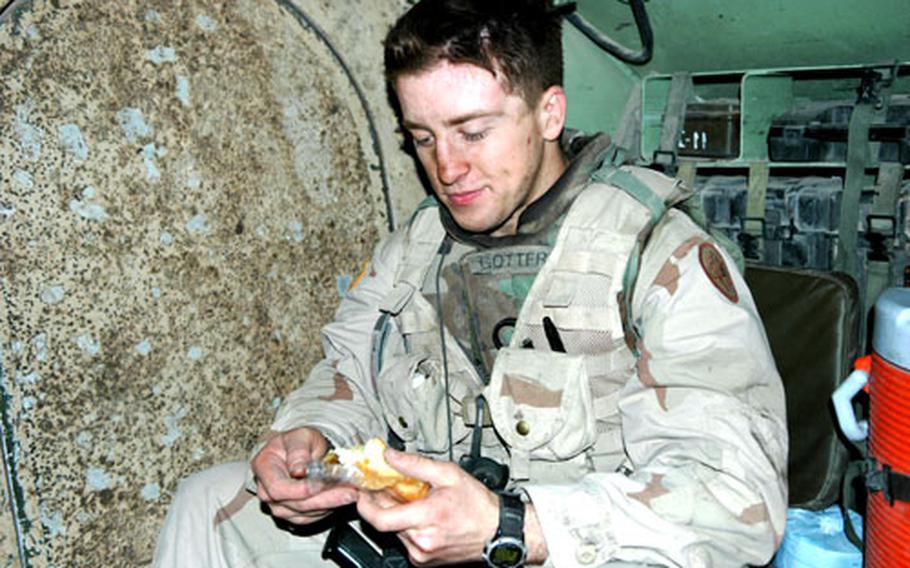 Pfc. Caleb Gottfried, 21, a medic from San Luis Obispo, Calif., eats a Twinkie after his Bradley was hit by a roadside bomb. No major injuries were reported. Gottfried, like many younger soldiers, referred to the strikes as being “blown up.” This is the second time he’s been “blown up,” he said. (Anita Powell / S&S) 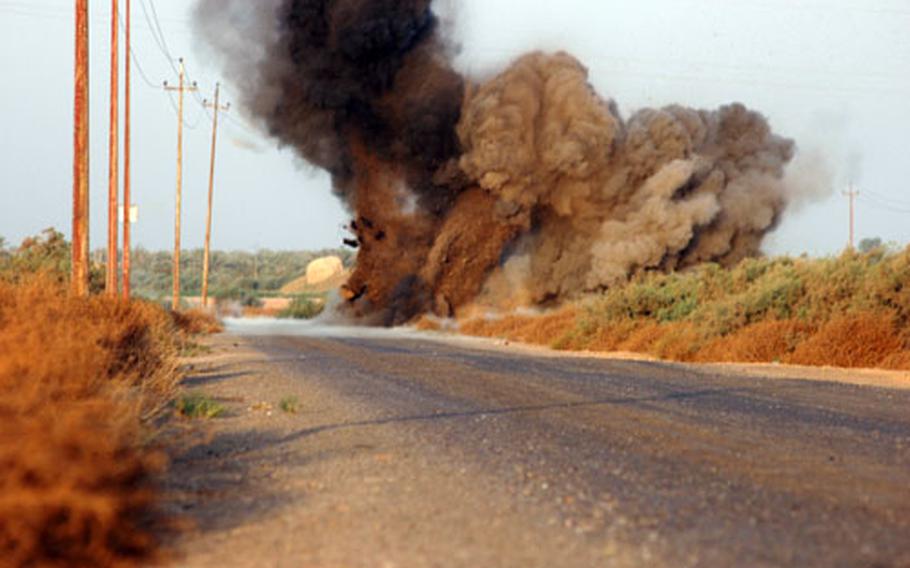 Members of a Navy Explosive Ordnance Disposal team detonate a roadside bomb found by members of 3rd Squadron’s Troop I. This bomb, which consisted of three 130-mm rounds, sent up a plume of smoke 100 feet high, members of the team said. (Anita Powell / S&S) 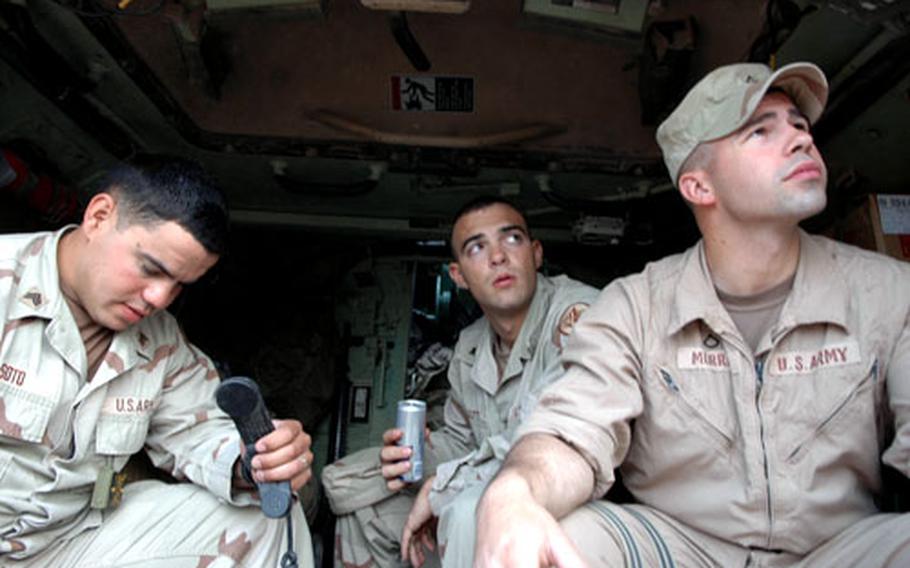 “Ironhawk” soldiers, from left, Sgt. Luis Soto Rivera, Pfc. Anthony Angotti and Pfc. Chris Murray relax inside their Bradley fighting vehicle before what was expected to be a routine 12-hour patrol. They returned to Forward Operating Base Falcon 20 hours later. (Anita Powell / S&S)

Iraq&#8217;s fertile crescent, a scenic slice of waving fields of grain and palm groves just south of the capital, is, at first glance, an idyllic stretch of countryside.

But behind the elegant reeds and rolling berms lies one of Iraq&#8217;s most entrenched and stubborn insurgencies.

The area, which is secured by the 3rd Squadron, 3rd Armored Cavalry Regiment of Fort Carson, Colo., is thought to be home to several prominent insurgent groups, including al-Qaida in Iraq, extremist group Ansar Al Sunna and several fringe groups such as the unambiguously named &#8220;Death Company&#8221; and &#8220;Islamic Anger Group.&#8221;

Since March, soldiers with the unit, operating out of Forward Operating Base Falcon, have patrolled the routes daily, peering into holes and through tall grasses as though participating in a demented Easter egg hunt &#8212; though the loot here often includes 500-pound bombs, many of them salvaged from munitions caches from the Iran-Iraq war of the 1980s.

The area is the scene of nearly 100 attacks monthly. A map in squadron headquarters charts each with a pushpin. The main roads aren&#8217;t visible under the mass of brightly colored pins.

The area has been given scant attention since U.S. forces entered Iraq in 2003, although insurgents in the area have been linked to attacks in Baghdad.

Unit officials say attempts to interact with local leaders have been met with wariness.

The unit has worked closely with Iraqi forces to attempt to make the area safer. While progress has been made, &#8220;It needs a long time,&#8221; Iraqi Brig. Gen. Amer Hassun, commander of the Iraqi Army&#8217;s elite Wolf Brigade, said through an interpreter. &#8220;I cannot specify the time. A lot of things need to be done. We also need equipment for the Iraqi military. Probably the terrorists have better equipment than us.&#8221;

Many rank-and-file soldiers &#8212; many of whom go on lengthy daily patrols &#8212; say their trips outside the wire take a toll.

But many soldiers say the experience, while difficult, has been worthwhile.

Other soldiers, like Escotto, say they&#8217;ve become inured to the constant threats.

Dailey offered praise for the young soldiers who frequently risk their lives outside the wire.