These army twins are used to hard work 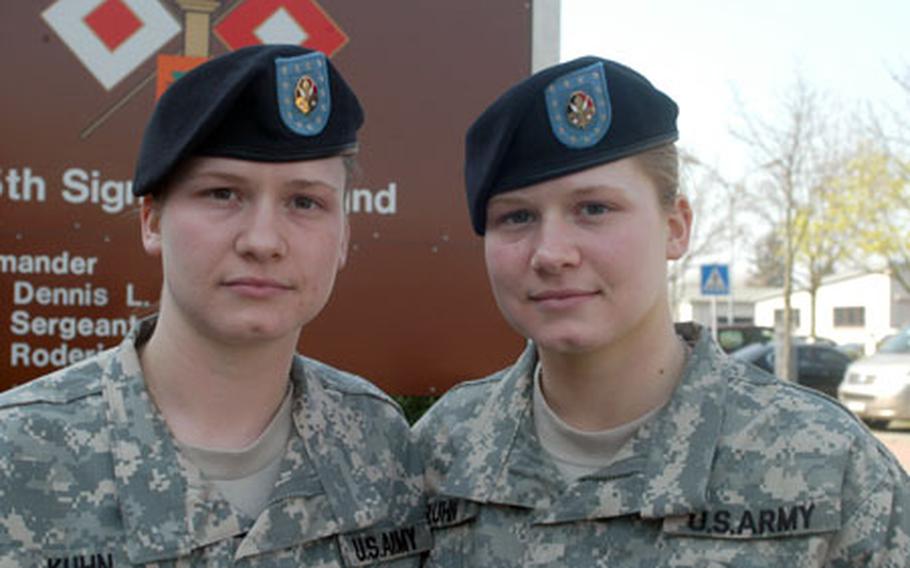 Julie, left, and Jennifer Kuhn, are identical twins and specialists with the 7th Signal Brigade in Mannheim, Germany. They were separated for the first time in their 21 years when they were assigned last year to different places in Iraq. (Nancy Montgomery / S&S)

MANNHEIM, Germany &#239;&#191;&#189; When basic training seems like a vacation and you are looking forward to returning to Iraq, you know your life before the Army did not include a lot of coddling.

So identical twins and 7th Signal Brigade Spcs. Julie and Jennifer Kuhn just look at each other when they hear other soldiers grumble about their jobs.

The two, who returned from Iraq in November and recently re-enlisted, were reared on a Pennsylvania farm that makes Army life seem soft. The women, with the same cleft chin, hazel eyes and blond hair pulled severely back, used to help butcher cows.

They had to rise before 4 a.m. to milk 150 cows before school. When they got home, it was time for more chores.

They were in the same company in basic training, trained for the same military job in information technology and were assigned together to the 72nd Signal Battalion. The first time they were really apart was during their Iraq deployment last year.

Jennifer was sent to Camp Taji; Julie to Camp Bucca. Their separation came in Kuwait, as Jennifer reluctantly boarded a bus.

Identical twins like the Kuhns are rare: three or four in every 1,000 deliveries. They result when one egg is fertilized by one sperm, then splits. The twins share the same DNA, and possibly the closest bond among humans.

They found their separation to be a maturing experience.

Jennifer is set to stay in Germany for three more years, while Julie is heading off to school at Fort Gordon, Ga. So they won&#239;&#191;&#189;t be back on the farm anytime soon.

Jennifer had a pig named Wilbur who followed her around. Julie especially loved the baby steers for showing at county fairs, and the fact the steers&#239;&#191;&#189; hair had to be blow-dried twice a day.