‘There should be no type of any withdrawal’ 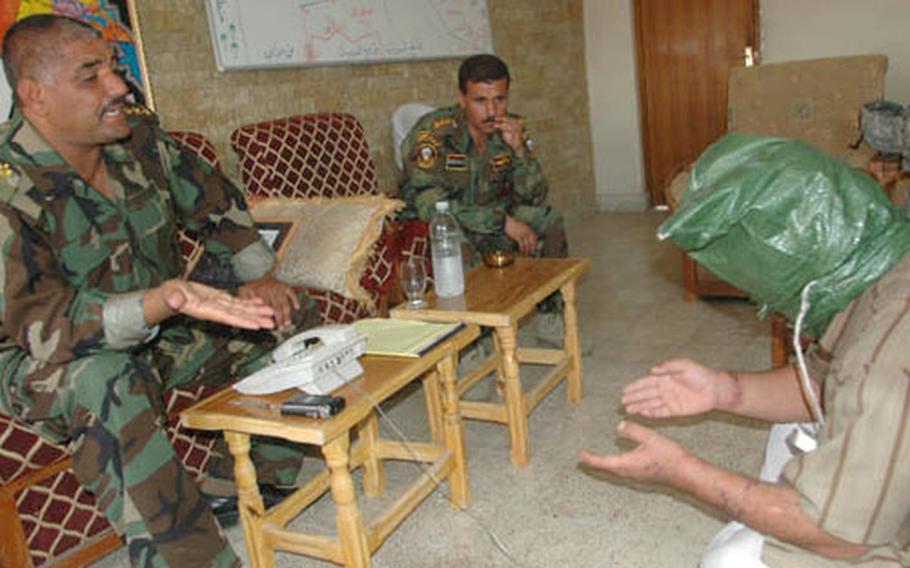 Iraqi police commander Abid Hamad Hasan, left, questions a suspected insurgent captured by the Iraqi police. Hasan said three of his men were killed the night before when they were checking cars at a crowded checkpoint. (Les Neuhaus / S&S)

Iraqi police commander Abid Hamad Hasan, left, questions a suspected insurgent captured by the Iraqi police. Hasan said three of his men were killed the night before when they were checking cars at a crowded checkpoint. (Les Neuhaus / S&S) 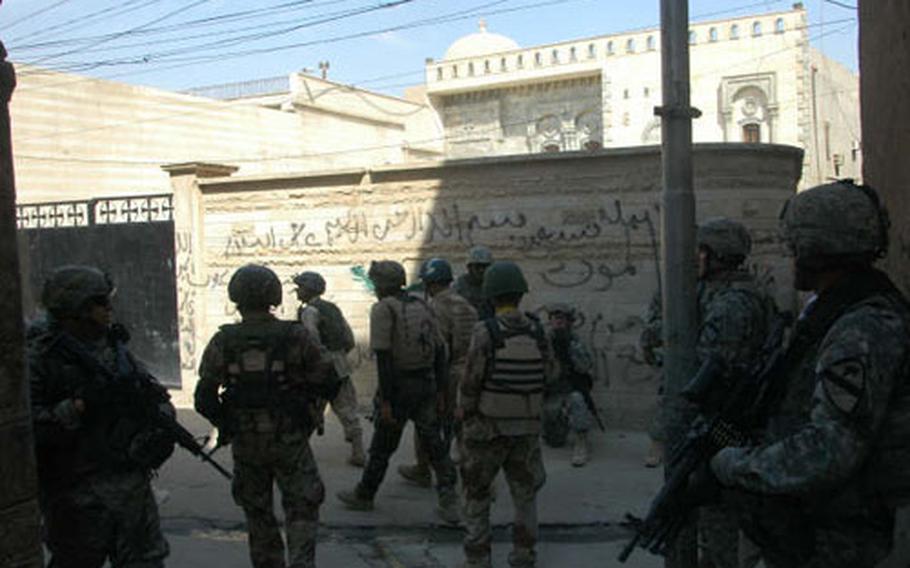 Iraqi and U.S. forces congregate during a security sweep of a neighborhood in Mosul on Thursday. With a troop surge underway in Baghdad, politicians and military leaders have begun discussing withdrawing some U.S. forces from the northern region. (Les Neuhaus / S&S)

MOSUL, Iraq &#8212; U.S. military officials have talked of a possible drawdown in Iraq&#8217;s north, but two local Iraqi commanders here say they aren&#8217;t yet ready for such a plan to take hold.

Iraqi army Lt. Col. Abdulkhaliq Hamed, commander of an outpost in what he and U.S. Army officials call the most dangerous part of the old section of Mosul, and Iraqi police commander Abid Hamad Hasan, who runs six stations in the central and northern area of the dense city, say they aren&#8217;t ready to take over security duties solely on their own.

&#8220;There should be no type of any withdrawal &#8212; we are not ready yet,&#8221; Hamed said through an interpreter during an interview Saturday at his outpost offices in western Mosul.

In recent weeks, military officials have been touting the success of Mosul and its potential as the future of a stable Iraq.

In a Friday news conference with Pentagon reporters, Col. Stephen Twitty, the commander of U.S. and Iraqi forces in the region, said attacks in Nineveh province have gone from 18 a day in December to seven to nine attacks now. And there are some 40,000 Iraqi security forces in the province.

&#8220;If we can continue on this trend &#8230; if we continue in the right direction with the provincial government, then I can foresee the possibility of my replacement coming in here may not be as robust as my particular brigade combat team rotates out,&#8221; Twitty said.

U.S. forces nominally ceded security in the province to the Iraqis in December, and there have been successes with the help of U.S. intelligence and firepower.

On July 4, forces captured Khaled Abdul-Fattah Dawoud Mahmoud al-Mashhadani in Mosul. Officials say he was the highest-ranking Iraqi involved with the al-Qaida in Iraq leadership.

Another success came Thursday, when troops arrested a man alleged to be the &#8220;primary weapons facilitator for al-Qaida in Iraq in the Mosul area,&#8221; Army officials said.

Still, the Iraqi commanders are unsure.

Hasan said he had lost three of his policemen Friday when three gunmen emerged from different cars at a crowded checkpoint and opened fire.

Hasan&#8217;s original station house suffered a twin-car bombing a year ago in August that destroyed the station and left the surrounding buildings badly damaged.

Hamed&#8217;s situation is similar &#8212; bombers attacked his outpost on April 15, killing two civilians. The outpost was previously run by the U.S. Army, but now only a small military transition team provides quick-reaction services to the Iraqi army.

Both of the Iraqi commanders interviewed said they needed more equipment, such as proper vehicles, and more U.S. forces. Solving the problem could take more time.

&#8220;Coalition forces cannot get out of Iraq until everything is stabilized &#8212; especially here in Mosul,&#8221; Hamed said. &#8220;It is not my fault that these men are here on their second or third tours. I would say to their families these men need to stay to make Iraq a democratic and free nation.&#8221;

When U.S. forces invaded in 2003, they created a security vacuum that no one has been able to fill, according to Joost Hiltermann, who directs Middle East projects for the Washington-based International Crisis Group.

&#8220;Eventually Iraqi forces will need to replace American troops, but for now, in Mosul and elsewhere, these forces are still too weak to assume full authority,&#8221; he said by telephone from Jordan. &#8220;A U.S. withdrawal should be commensurate to an Iraqi ability to stand up sustainable security forces, not precede it, lest the security vacuum be filled by nonstate actors such as al-Qaida in Iraq.&#8221;

The troops of the Army&#8217;s 2nd Battalion, 7th Cavalry Regiment are the one American battalion for a city of 1.8 million. There are seven Iraqi army battalions for Mosul.

In contrast, Baghdad has 27 U.S. Army battalions working to secure a city estimated to number more than 7 million, according to Maj. Joseph Kopser, 36, a native of Lexington, Ky.

Just a year and a half ago, 11 U.S. Army battalions patrolled Mosul&#8217;s restive corridors.

On Sunday, U.S. and Iraqi troops searched for a North African man alleged to be part of the insurgency. The tip came from a detainee under the custody of Hasan, the Iraqi police commander. The U.S. military had come with a substantial force to support the Iraqis on the operation, and both Iraqi commanders want to keep it that way.

&#8220;I need them to back me up as a quick-reaction force when I call them,&#8221; Hasan said in regard to his reliance on the American forces.