Buy Photo
New York Yankees pitcher Whitey Ford gives pointers to Johnny Ross of the Darmstadt Comets during the USAFE clinic at Wiesbaden. Ross was the winningest lefthander in the Germany Conference over the previous three years; at one point in 1965, he won five games within eight days. (Lloyd Borguss/Stars and Stripes)

Buy Photo
New York Yankees pitcher Whitey Ford gives pointers to Johnny Ross of the Darmstadt Comets during the USAFE clinic at Wiesbaden. Ross was the winningest lefthander in the Germany Conference over the previous three years; at one point in 1965, he won five games within eight days. (Lloyd Borguss/Stars and Stripes) Buy Photo
Whitey Ford, during an interview at Wiesbaden. (Lloyd Borguss/Stars and Stripes) 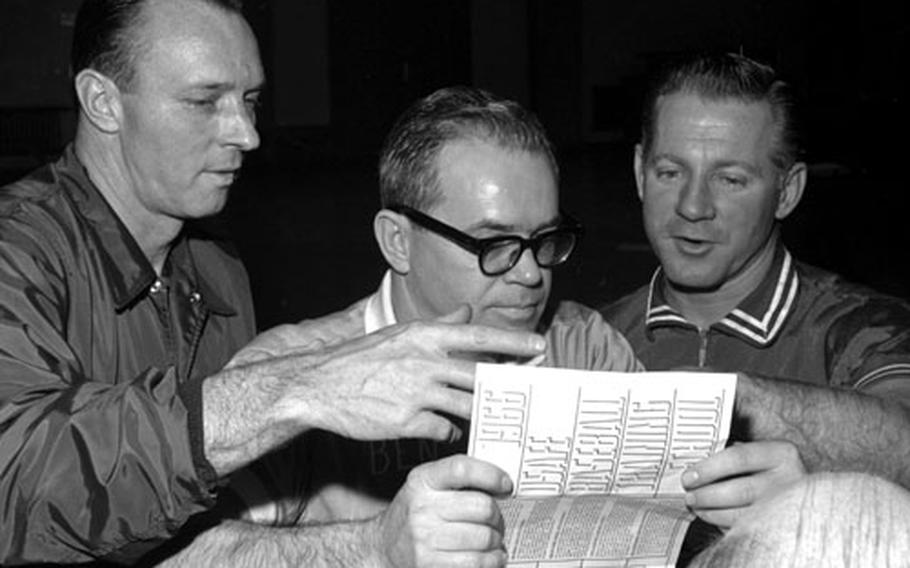 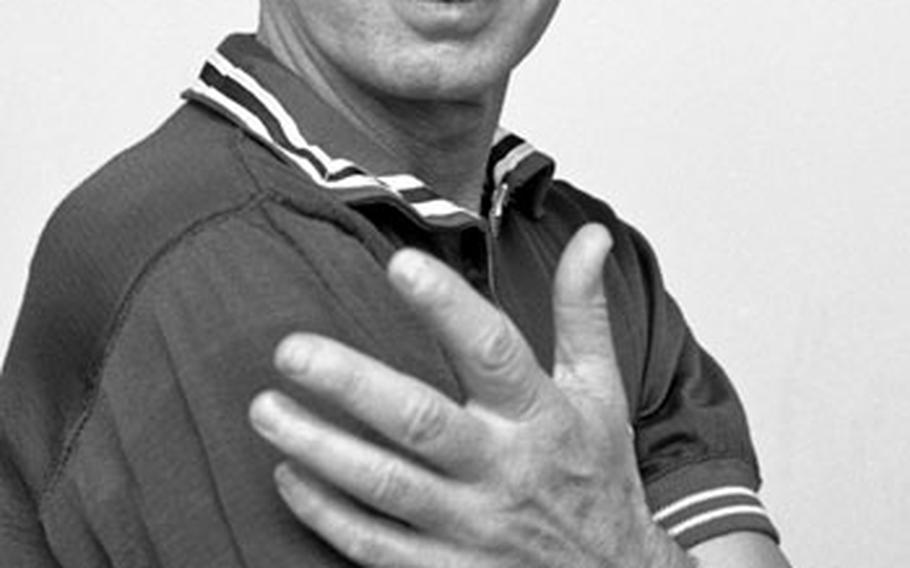 The answers to both questions is an unequivocal no.

The blond left-hander who has made a profession of exasperating opposing batters in the American League quietly but firmly ruled out any notion that he is ready to leave the mound for other pastures.

Ford, currently playing teacher at the 1966 USAFE Baseball Clinic at Wiesbaden Air Base, sipped his coffee and said, "I think I'll be able to go another three years."

This should bring joy to loyal Yankee fans, who have become used to seeing their favorite southpaw thrown into the breach at most of the Yanks' critical games since he came up to the club in 1950.

Although the 37-year-old Ford was always a fine pitcher for New York, it has only been in the last several years that large-scale success has come to him.

Recalling his days under Casey Stengel's colorful managing, Ford remarked, "Casey would use me, say, every five days, and sometimes six would go by. I didn't get to pitch every fourth day until (Ralph) Houk came along."

If he had his druthers, Ford would rather pitch more often. "I'm not an overpowering pitcher. I've always had to rely on control, and I've found my control's sharper if I pitch more often."

Whitey, who holds the World Series record for consecutive scoreless innings at 33 2-3 (ranking as one of his top thrills, "although I didn't think about it until a couple of days later"), allowed himself a large grin when one of the clinic students chided him about the Yanks' drop to sixth place last season.

While cautious in assessing the Yankee chances in the 1966 campaign, he made this generality: "I think the league is going to be close from now on. The years of Yankee domination are over."

Ford observed &mdash; a trifle wistfully &mdash; that baseball has changed since he came up to the majors 16 years ago. Said he: "I think they made a mistake when they added eight games to the schedule. If anything, it would have been better to knock a few games off, play a schedule of around 140 games."

Nor does he care for night games and travel, although he admitted he's luckier than most in that he lives with his wife and their three children on Long Island, within easy reach of Yankee Stadium. His homelife isn't badly disrupted.

"A guy like Mickey (Mantle) now, his home is in Dallas, he heads for Florida for spring training, plays home games in New York and goes on the road. He's the one who's hurt."

Invariably. pitchers are asked which hitters give them the most trouble. Ford shrugs off the question. "Brooks Robinson is tough on me, but these things tend to go in cycles. One guy may hit you for a season or two, then you start getting him out all the time."

A hot topic in baseball at the moment is the legal plight of the Milwaukee Braves, who face court orders to stay in Milwaukee and a court order to play in Atlanta.

Says Ford: 'The ball players don't say much about it, really. That's the owners' business." He leaned back and thought a moment. "It's not good for baseball, though."

Asked for his personal view on the Milwaukee affair, Ford voiced the opinion that the club should he allowed to move. "The fans weren't supporting them, so they should move. They drew well when they were winning, but attendance hasn't been as good since they haven't won pennants."

Ford, with fellow instructors Jim Hegan. Frank Crosetti, Bill Kinnamon and Curt Blefary, completed a clinic at Torrejon Air Base in Spain before flying in for the five-day session here. The clinic winds up Friday and begins daily at 9 a.m.

Whitey and his wife plan to visit Ireland, where Mrs. Ford hais relatives, before returning to the United States.