There's no playtime in Rawah sandbox 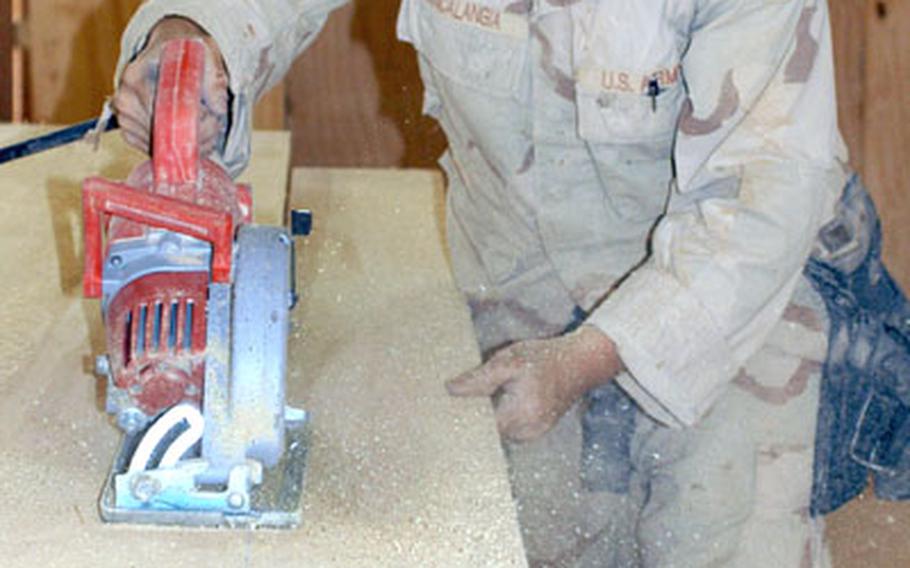 Spc. Gian Francalangia, Company A, 94th Engineer Combat Battalion (Heavy) cuts a sheet of plywood Friday at Command Outpost Rawah. Francalangia was working on the Morale, Welfare and Recreation building, which will house an Internet cafe for soldiers based at the outpost. (Rick Emert / S&S)

Spc. Gian Francalangia, Company A, 94th Engineer Combat Battalion (Heavy) cuts a sheet of plywood Friday at Command Outpost Rawah. Francalangia was working on the Morale, Welfare and Recreation building, which will house an Internet cafe for soldiers based at the outpost. (Rick Emert / S&S) 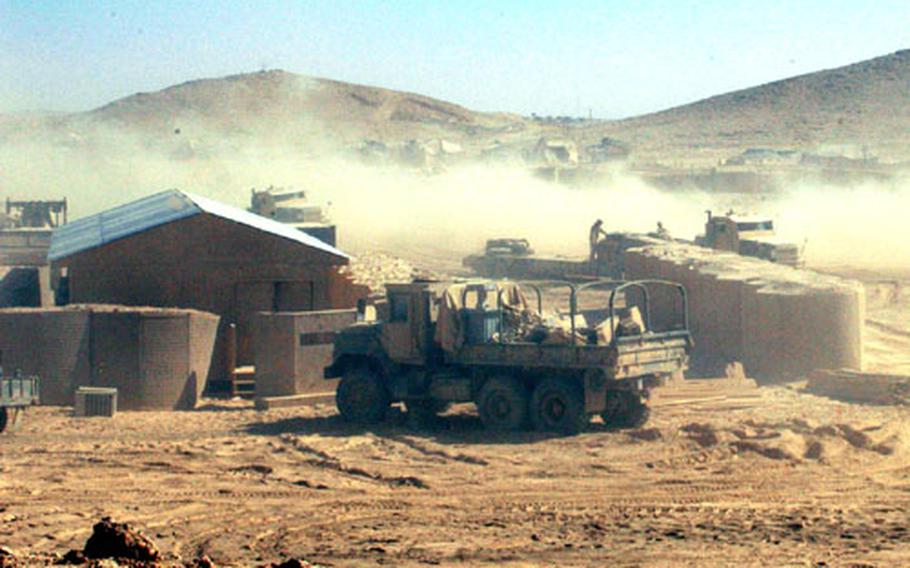 Command Outpost Rawah sits in clouds of dust Friday. The outpost, being constructed by the 94th Engineer Combat Battalion (Heavy), is in a desert in northwest Iraq near the Syrian border. (Rick Emert / S&S) 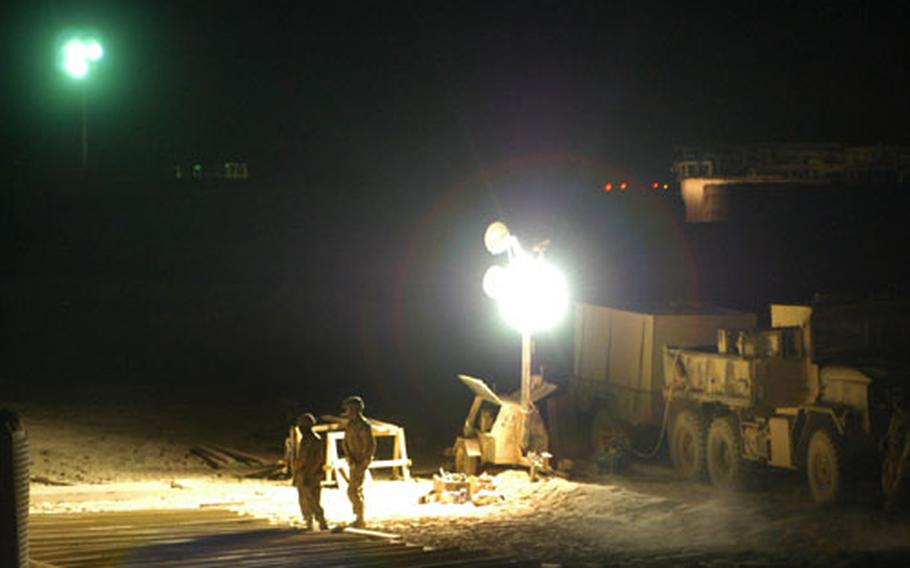 Soldiers from the Germany-based Company A, 94th Engineer Combat Battalion (Heavy) work Friday on the floor of what will be a gym at Command Outpost Rawah. The soldiers work during the night to avoid the heat of the day at the desert site. (Rick Emert / S&S)

Soldiers from the 94th Engineer Combat Battalion (Heavy) are finding that with each footstep or moving vehicle, sand blows from one end of the outpost to the other covering everything in a light-colored dust.

The soldiers are building a command outpost on this patch of desert in northwest Iraq near the Syrian border. Construction of a tent city, tactical operations center, showers and a Morale, Welfare and Recreation center began in mid-July and should be completed by Sept. 1.

In the meantime, the engineers &#8212; based out of Grafenw&#246;hr, Vilseck and Hohenfels, Germany &#8212; have been living in conditions as austere as they get.

&#8220;I would take a water bottle and cut a hole in the cap and pour that over myself like a shower head,&#8221; said Spc. Joey Jochim, a heavy equipment mechanic with Headquarters Support Company.

While others pour bottled water into buckets to wash up, it matters little: The sand is everywhere. In some areas, it&#8217;s more than two feet deep. The suction caused by walking in it threatens to pull off one&#8217;s boots, much like thick mud.

Most of the soldiers have been at the site for a month or more, and they don&#8217;t seem to notice the sand so much anymore. Very few of them wear goggles, and they walk around with dust caked on faces and uniforms that were clean when their work shifts began.

They walk from the mobile kitchen trailer through the dust-filled air with an uncovered tray of hot food to a temporary dining tent made with mosquito netting. The tables are made of sheets of plywood, and the soldiers pull up old Meals, Ready to Eat cases to sit down on.

None of them complains, though; for the first couple of weeks they had only MREs to eat.

They also now have latrines. The first week or so, a trip to the bathroom was a walk out into the desert with a shovel.

The week&#8217;s high point comes when the logistical convoy from FOB Marez arrives with supplies and mail. But most days, they don&#8217;t do much but work and sleep.

The focus is not on having fun, but on getting the work done so the soldiers can return to Forward Operating Base Marez, their home base in Mosul.

&#8220;We have things like movie night to keep morale up, and we had a steak dinner one night and then a steak and eggs breakfast,&#8221; said 1st Lt. Alex Young, operations officer for the construction site at Rawah. &#8220;There&#8217;s not a lot of free time out here. If we did a lot of those recreation activities, it would only draw this out longer.&#8221;

A month from now, when the engineers are back at Marez, soldiers based at the Rawah outpost may be sitting in the dust thinking: &#8220;Man, it sucks here.&#8221;

What they won&#8217;t know is what life at Rawah was like when the 94th Engineers first pulled in.