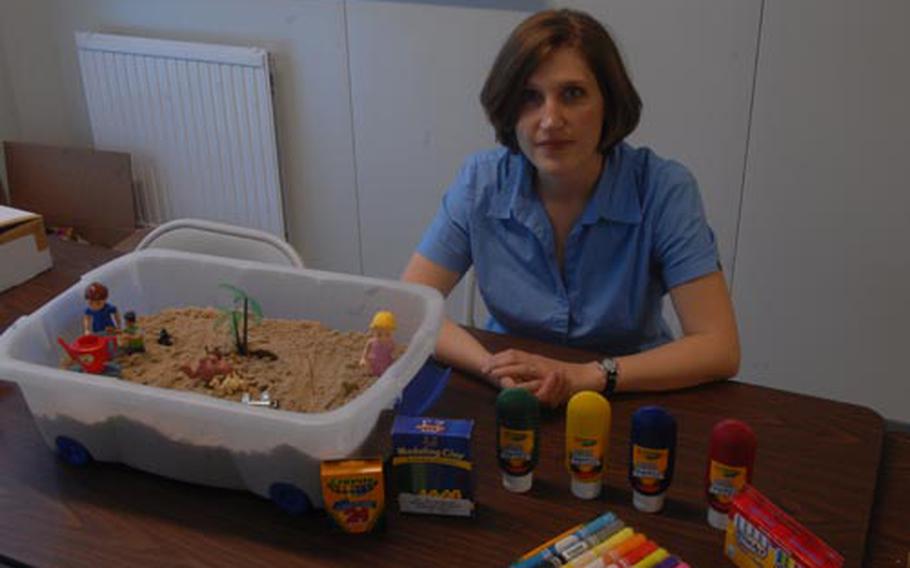 GRAFENW&#214;HR, Germany &#8212; Art therapy is the latest approach the Army is using in Europe to address soldiers&#8217; psychological problems stemming from downrange deployments.

Since early May, soldiers and civilians seeking psychological treatment have had the option of joining a Tuesday afternoon art therapy session at the new Grafenw&#246;hr Behavioral Health Clinic.

The art therapy &#8212; which officials say is a first for the Army in Europe &#8212; is part of a push to aggressively target surging mental health problems among troops. Twenty-seven percent of noncommissioned officers on their third or fourth tour to Iraq or Afghanistan exhibited symptoms of post traumatic stress disorder, according to the Pentagon.

In a May 20 message, garrison commander Col. Chris Sorenson urged members of his 30,000-strong military community to seek professional help for problems such as grief, depression, anger and frustration. Sorenson cited the effects of the fatal shooting of five U.S. soldiers &#8212; allegedly by another U.S. soldier &#8212; on May 11 at a combat stress treatment center at Camp Liberty, Iraq. Two of the victims were members of Grafenw&#246;hr&#8217;s 172nd Infantry Brigade.

"In light of the recent tragedy at Camp Liberty in Iraq, I would like to again emphasize the medical, behavioral health and counseling services available at our garrison," he said.

So far, the art therapy class has attracted six regular members who include soldiers and civilians, according to Amanda Salisbury, the clinical social worker who runs the sessions.

Art therapy can be useful for dealing with trauma stemming from events such as a bombing, a terrorist attack, the death of a child or child abuse, Salisbury said. A room at the behavioral health clinic is stocked with crayons, water color paints, colored pencils and clay for the sessions.

Army regulations prevent people who are participating in counseling sessions from being interviewed by the media, and Salisbury was reluctant to talk about the art produced by her clients. But she was willing to describe the sort of things that members of the group are asked to draw.

In one session a participant is asked to draw "the door to your heart" and, "the room inside your heart." In another session, participants draw "a safe place."

"If you know your safe place, you can take yourself there in your mind when you feel anxious," she said.

Working with military personnel is a new experience for the 30-year-old Spokane, Wash., native.

"Before I came here in August, I hadn&#8217;t worked with soldiers, but my entire therapy background has been trauma related," said Salisbury, who has completed about 100 hours of art therapy training. Her past work involved art therapy at a homeless center for women and children, and work at a private psychology practice in Spokane.

The counseling is based on the belief that "the creative process involved in artistic self-expression helps people to resolve conflicts and problems, develop interpersonal skills, manage behavior, reduce stress, increase self-esteem and self-awareness, and achieve insight," according to the American Art Therapy Association&#8217;s Web site.

Art therapy helps people problem solve, instills hope and helps them get in touch with feelings, she said.

"Art therapy, regardless of what your issues are, has this way of bringing the internal external. It can be helpful for people who have had a trauma experience. Sometimes people get detached from what their internal experience is," she said.

When Salisbury asks people attending art therapy sessions how they feel about a traumatic event, they typically reply that they don&#8217;t know or that they are angry. But the anger normally is symptomatic of other, hidden feelings, she said.

In one of Salisbury&#8217;s art therapy sessions in the States, a patient who was asked to draw a happy family scene produced a picture of a camping holiday.

"When she described her drawing, she was happy and laughing," Salisbury said. "She enjoyed the art process as well. But I was curious that everyone in the family had ears but her dad. She was able to share that she never felt heard by her dad."

The art therapy sessions are not about being a good artist, she said.

"I love to do art and I do it often but I&#8217;m not necessarily good at it," she said. "[Art produced during art therapy] could be stick figures."

Sometimes the people who attend art therapy want to burn their pictures because they are too personal or they don&#8217;t like the feelings they evoke.

Often they keep them, she said.

"Anger is common, but more often you will see tearfulness from men and women because art has a way of cutting through a lot of that," she said.