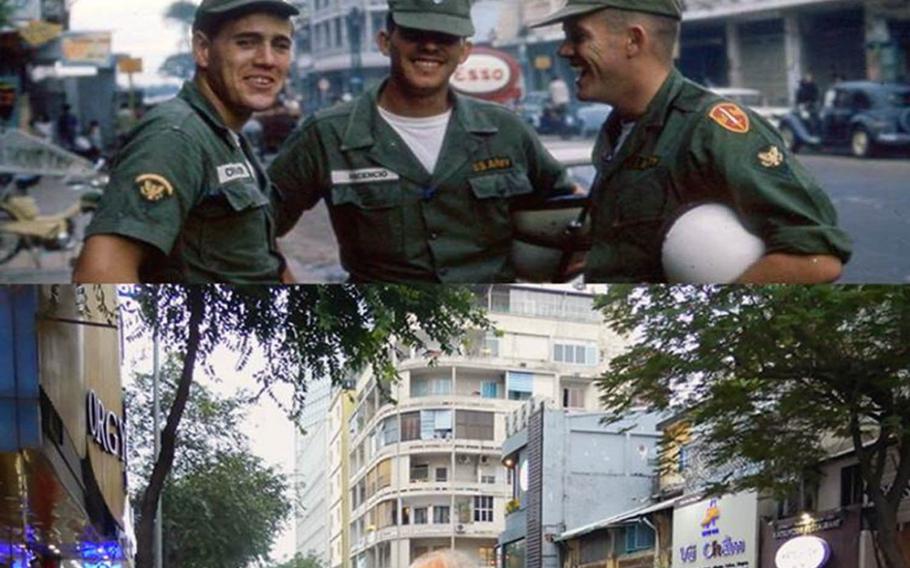 Photographs of the same street show, top, from left, Army buddies Gus Chaisson, Jim Ascencio and Ron Ware in Saigon in 1964 and, bottom, Ascencio on Jan. 3, 2018. (Courtesy of Jim Ascencio and Paul Blizard)

Striking images of modern-day Vietnam are jogging the memories of American war veterans who can compare them with historical photographs taken in the same locations.

Paul Blizard, 65, of Louisville, Ky., moved to Vietnam with his wife, Pat, in 2012 to help street children and unwed mothers. He spends his free time cycling around Ho Chi Minh City, formerly known as Saigon, searching for spots depicted in wartime images.

Some parts of the city were the backdrop to award-winning news photographs, such as the corner where a Buddhist monk burned himself to death in a protest in 1963. Others are places where veterans took their own snapshots during the war.

Blizard’s “then” and “now” images, which blend war-era photographs with pictures of today’s Saigon, have been popping up on veterans’ social media feeds over the past year. He’s posted more than 800 images that have been viewed by thousands of Instagram users and Vietnam War history Facebook group members.

“I have quite a fan base,” he said. “I try to focus on dramatic photographs and things that would be interesting to guys who were there.”

Some locations depicted in historical photographs have been destroyed. Many are still there, although places where U.S. forces were based are being used for other things these days, such as museums, Blizard said.

The Vietnam War had a profound impact on the father of seven, three of whom served in uniform. Blizard wasn’t called for the draft, but several of his friends were killed in action in the conflict, he said.

Riding around Saigon, now a vast metropolis of 11 million people, piqued Blizard’s interest in war history and inspired him to research old photographs and track down their locations, he said.

Some of his photos show U.S. military equipment that’s still in the country, such as an M-113 armored personnel carrier, UH-1 Huey helicopters and self-propelled howitzers. Others show today’s vibrant city life on streets where black-and-white photographs captured troops engaged in life-or-death struggles.

Blizard travels to former military facilities such as the Tan Son Nhat International Airport, once a sprawling Air Force base. Often, the places he visits have changed drastically since the war.

When he finds the spot he’s looking for, he takes a picture and records its GPS coordinates, which he includes, along with historical information, in his social media posts. “I’m really intent on trying to find the exact location of a photo,” he said.

“Most of the locations where famous war photos were taken had been identified but that one hadn’t,” Blizard said, noting that he tracked down the street using a shop number that appears in the photo.

“All I had was a checkboard floor, but I found exactly where the photo was taken,” Blizard said.

Many of his images are related to the fall of Saigon in April 1975.

“Some of the vets aren’t crazy about photographs of communists taking over, but I’m just documenting the history of the city,” he said.

He’s had positive reactions from most of the veterans he knows. Some send him old photographs, and he goes to the places where they were taken and makes personal “then” and “now” images for them.

Former Army nurse Diane Radlowski, who served at the 3rd Field Hospital in Saigon in 1970-71, went back to look for her old workplace but couldn’t find it until she contacted Blizard last year.

“I know exactly where it is, so she came to Vietnam and I took her there,” he said. “The buildings are there; they have just been repurposed. She was thrilled to go back.”

Radlowski had looked for the hospital on previous visits working with the Development of Vietnam Endeavors, or DOVE, fund, which was started by Vietnam vets in Toledo, Ohio, 20 years ago to pay for projects for the needy, she said.

When she got in touch with Blizard, he had recently discovered some war-era red crosses painted on the hospital walls.

The building, which houses a number of facilities, including a museum, has changed drastically over the years, although an outside walkway is recognizable, and barbed wire still hangs from fences nearby, Radlowski said.

“It was a very ugly, desolate area during the war, and now it’s all built up and green,” she said.

The visit brought back memories of treating GIs with combat wounds and run-of-the mill ailments such as appendicitis, skin diseases and drug and alcohol problems, she said.

Radlowski has seen some of Blizard’s photographs online and is impressed. “I think it’s amazing,” she said. “It’s so interesting that he does this.”