A parachutist is checked out before taking to the air. (Gus Schuettler/Stars and Stripes)

A parachutist is checked out before taking to the air. (Gus Schuettler/Stars and Stripes) 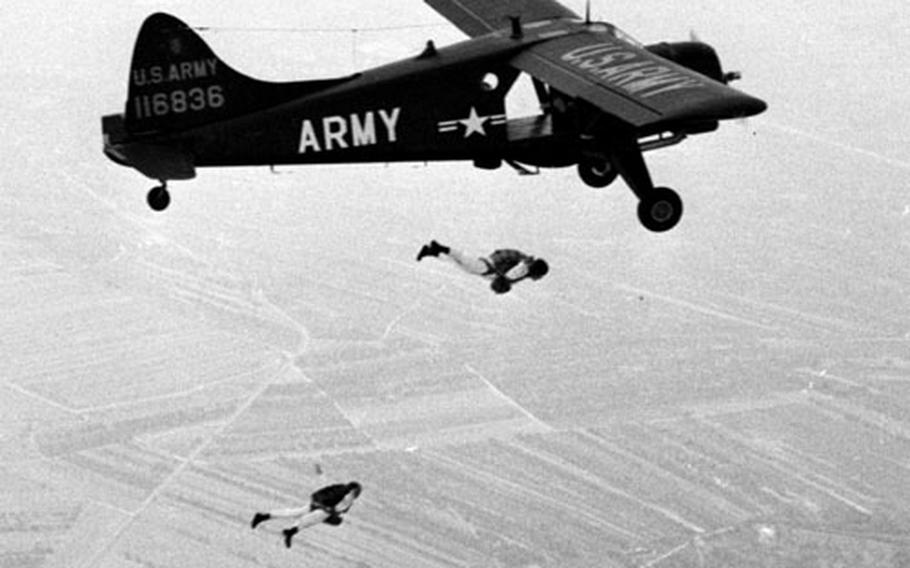 Sfc. Harold Smith, at bottom, and Capt. Garland J. McAbee in action over the Finthen airfield. (Gus Schuettler/Stars and Stripes)

JUMPING on company time wasn't enough for a bunch of paratroopers in the 504th Inf's Co D. So they got together at the Finthen airstrip in Germany after work and took up the fine art of sky diving.

Now they've opened their select club to the rest of the 8th Inf Div. A total of 102 applicants, including a handful of non-jumping "straightlegs," have signed up for the Golden Arrow Sports Parachute Club.

They are undergoing the rigorous training program set up by Capt Garland J. McAbee, CO of Co D and a guy who would jump every day if he could get up there.

"We screen all applicants to eliminate hot rods — guys who will try it once and then quit," said McAbee, who is from Phoenix, Ariz.

The captain is the PCA's regional safety officer for Europe, and he doesn't leave anything to chance.

"All we need is one fatality and this club is through," he emphasized. "But sky diving is definitely safe — if a man uses his head."

In the Golden Arrow there's no place for anyone who can't. Once accepted, the full treatment is given to neophytes and airborne veterans alike.

All are regarded as student parachutists. After completing pre-jump training and conditioning, they make five static-line jumps. Then, if everything looks good to the instructor, a member is ready to pull the ripcord and call himself a sky diver.

Sky divers who belong to the Parachute Club of America come in four grades. Class A members need at least 10 jumps. Class B requires 25 free-fall Jumps, including chute-opening delays of 30 seconds and demonstrated accuracy in landing on target.

Class C sky divers need at least 75 freefall jumps and must be able to pull off certain midair acrobatics. Class D is tops and calls for at least 200 free falls and all sorts of aerial wizardry.

McAbee and the other three instructors are qualified as Class C sky divers. Both McAbee and Botelho have logged more than 300 jumps. A Special Forces and Ranger veteran, McAbee has been airborne since 1943. He's made as many as five jumps in a day.

As a team, McAbee, Botelho and Smith have shown off their sky-diving prowess, in air shows at Wiesbaden, Mainz, Stuttgart and Etain, France, They wear white coveralls, football helmets and goggles, and use 28-foot parachutes with a section removed to improve maneuverability.

The special chutes cost about $500 for the front-and-back rig. They are supplied by the club. Every time he takes a dive, a club member shells out $1.50 for chute maintenance. He also has to learn how to roll his own, under supervision of a parachute rigger.

If you are ever around the drop zones at Finthen or Bad Kreuznach, here's how you tell the players apart: White coveralls mean a Class C expert. The rest of the club's cadre wear brown coveralls, and the boys in blue are apprentice sky divers.

What does McAbee's wife think about sky diving?

How about his five sons?

"They think it's great."