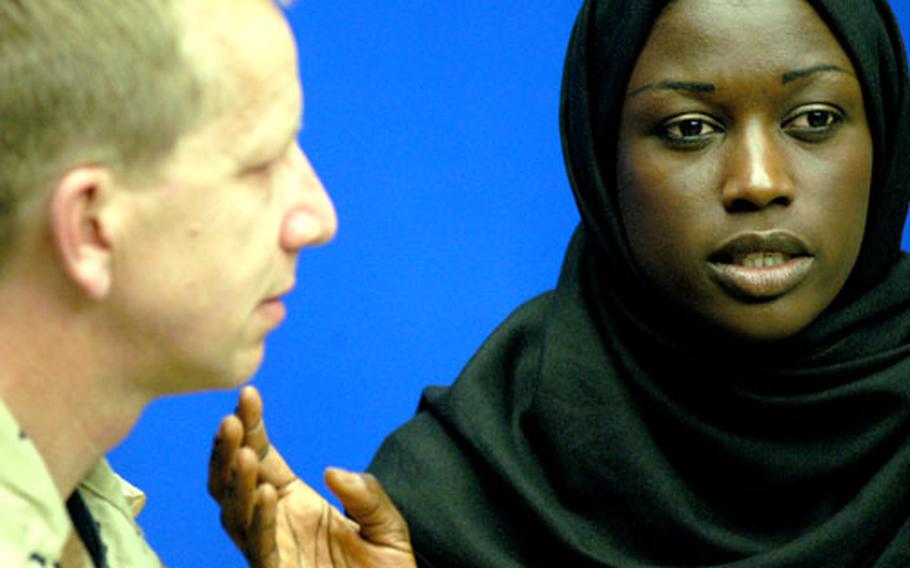 The blind woman Magdelena, played by Clotilde Cisse, reaches out to a conflicted U.S. Marine named A.G., played by Andrew Carey-Yard, in a romantic gesture as the deadly battle for an Iraqi city rages around them in the new play “Fallujan Women.” The production is by the Anglophone Collaborative Theatre of Stuttgart. (Ben Murray / S&S)

STUTTGART, Germany &#8212; An English-language theater group in Stuttgart known for tackling contemporary, controversial issues will take on its most volatile topic to date when its new play, &#8220;Fallujan Women,&#8221; premieres this month.

Centered on a battle-weary U.S. Marine searching for an Iraqi journalist during the battle of Fallujah, the 90-minute play by the Anglophone Collaborative Theatre of Stuttgart is meant to stir the pot of discussion, cast members said this week.

&#8220;There&#8217;s going to be a lot that [audience members] are going to be talking about afterward,&#8221; said James Merkle, who plays a principal character named Chaplain James Parry.

With its subject matter and the possible use of graphic, unaired video footage of battlefield carnage from Iraq incorporated into the play, writer and director Stuart Marlow said he knows he&#8217;s headed into turbulent theatrical waters &#8212; and has intentionally structured the play to go there.

Inspired to write the play after he heard accusations in the international journalism community that American soldiers were deliberately targeting Arab reporters in the war, Marlow set out to create a drama that would generate debate about the subject of freedom of speech in a war zone.

As a former journalist with experience working with soldiers, Marlow said he wanted to present concerns from both sides on the issue and let the audience form its own opinion.

&#8220;My thing is that soldiers have to go through [battles] every day. Their case has to be represented," Marlow said.

The result is a production based on the Greek tragedy &#8220;The Trojan Women,&#8221; in which a warrior falls in love with the woman hiding the man the soldier is hunting.

Updated for the modern stage, the central character in Marlow&#8217;s play is a Marine tasked with finding an Iraqi journalist who has been collecting disturbing footage of the war. The reporter, convinced the Americans are out to kill him, hides with a blind Fallujan woman who becomes the object of the Marine&#8217;s affection.

Performed in a production style Marlow calls &#8220;documentary theater,&#8221; the script uses eyewitness accounts, descriptions and even poetry collected from soldiers and war correspondents, supplemented by video projected onto the stage at specific times.

Some of that video, the director said, is disturbing, unaired Iraq war footage &#8220;looking behind the walls [at] rotting bodies and stuff,&#8221; being sent to him by a British colleague. But just three weeks before the play is scheduled to open, Marlow still isn&#8217;t sure if he&#8217;ll use it.

Some members in the cast said they think the video could be a distraction in what is already a gloomy spectacle populated by sad, damaged characters.