The wounded return to Afghanistan: 'I came back to prove to myself that I am not broken' 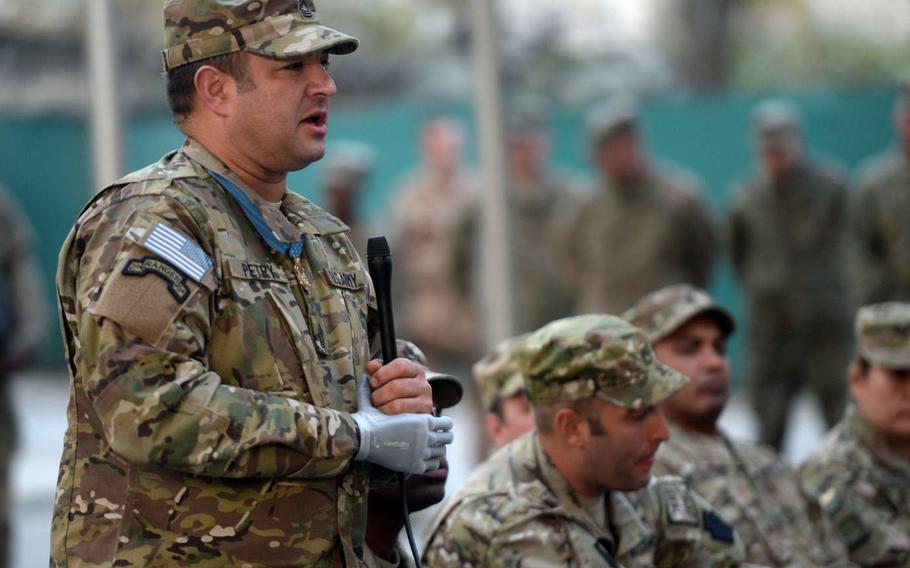 Retired Master Sgt. Leroy Petry, who had his arm amputated after being wounded in action in Afghanistan in 2008, tells servicemembers at NATO headquarters on Saturday, Nov. 19, 2016, that it is important for the United States and its allies to continue assisting Afghanistan. (Phillip Walter Wellman/Stars and Stripes)

Retired Master Sgt. Leroy Petry, who had his arm amputated after being wounded in action in Afghanistan in 2008, tells servicemembers at NATO headquarters on Saturday, Nov. 19, 2016, that it is important for the United States and its allies to continue assisting Afghanistan. (Phillip Walter Wellman/Stars and Stripes) 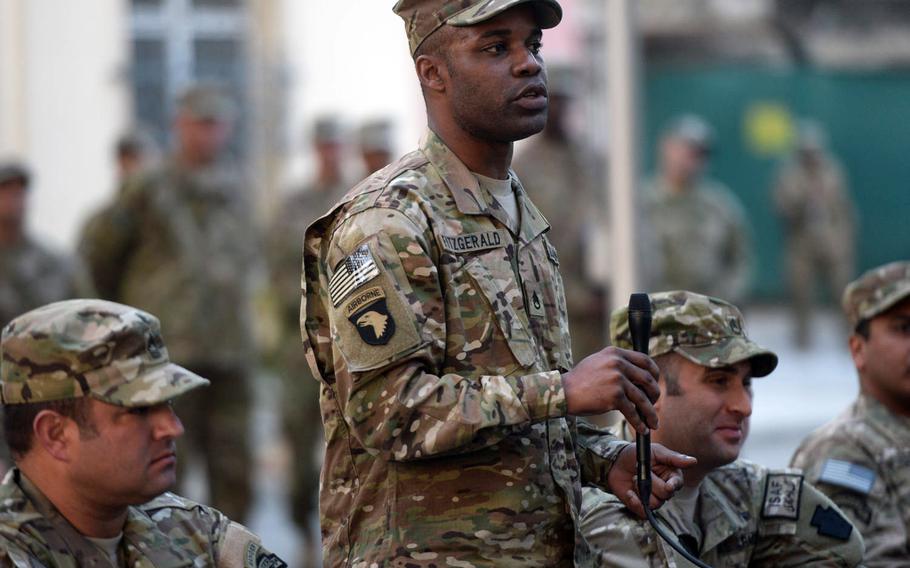 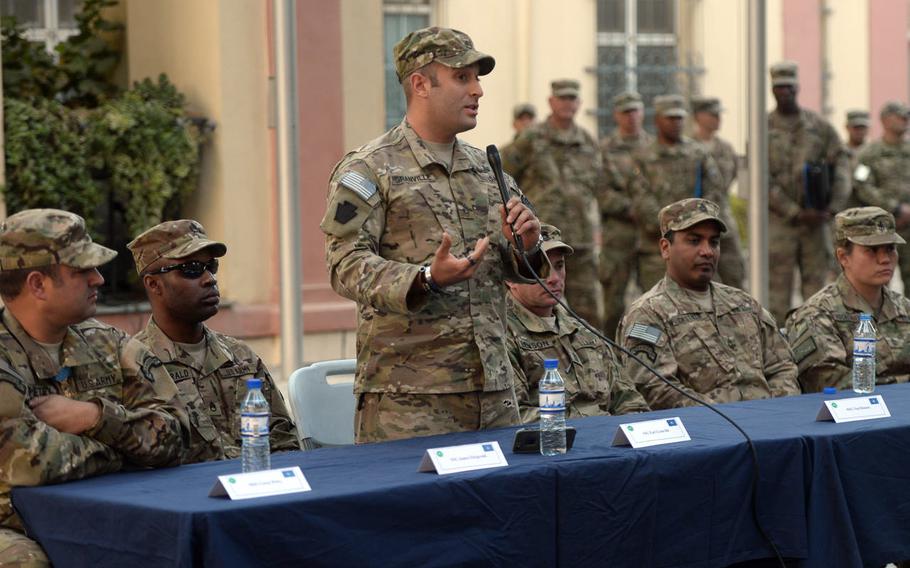 Retired Army Staff Sgt. Earl Granville (standing) on Saturday, Nov.r 19, 2016, tells a crowd at NATO headquarters that he is lucky he only lost a leg in Afghanistan and not his life. He was one of six wounded American soldiers who returned to Afghanistan with Operation Proper Exit. (Phillip Walter Wellman/Stars and Stripes) 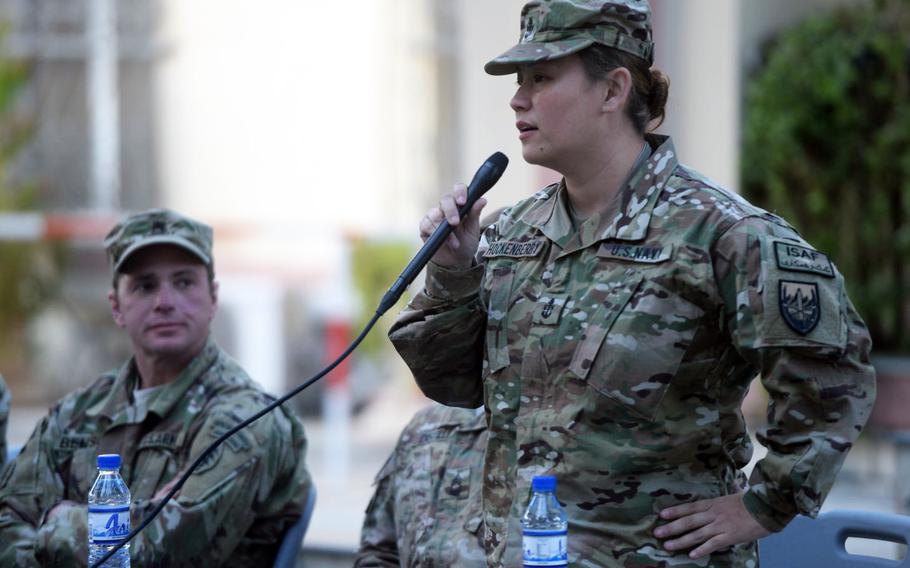 Navy Senior Chief Petty Officer Raina Hockenberry thanks servicemembers at NATO headquarters in Kabul on Saturday, Nov. 19, 2016 for "fighting the great fight." Hockenberry was wounded when an Afghan solider opened fire on her and her colleagues in 2014. (Phillip Walter Wellman/Stars and Stripes)

“We were going on a site visit and one of the (Afghan) soldiers turned his weapon on us,” she recalled. “I was shot five times: twice in the leg, it shattered my tibia; once in the groin, my femoral artery was hit; and twice in the belly.”

Hockenberry, who wears a metal brace on her leg and walks with a cane, spoke of the incident at NATO’s base in the Afghan capital — one of several sites across Afghanistan where she and five other wounded Americans visited in an attempt to bring closure to their harrowing experiences.

“People ask why I came back,” she recently told an audience of coalition servicemembers, predominantly Americans. “I came back to prove to myself that I am not broken.”

Hockenberry and the other Purple Heart recipients returned to Afghanistan in mid-November with Operation Proper Exit, a program run by Feherty’s Troops First Foundation. The nonprofit brings wounded servicemembers back to the theater to meet with those who are deployed, according to the program’s website.

Nearly 2,400 U.S. troops have died in the 15-year war in Afghanistan, along with more than 1,100 servicemembers from other coalition nations, according to the Brookings Institution Afghanistan Index. More than 20,000 U.S. servicemembers have been wounded.

“No matter how much time passes, it’s never easy to describe the events that have brought us all to this day,” said retired Army Staff Sgt. James Fitzgerald.

On Nov. 13, 2010, while serving with the 101st Airborne Division in Kunar province, Fitzgerald’s battalion came under fire on mountainous terrain. Five of his colleagues were killed; he and 13 others were wounded.

“My injury entailed a gunshot wound to my left thigh and that impact knocked me off the mountain, falling approximately 50 feet into a ravine where I fractured my knee and broke my femur in my right leg,” he said. “I had fractured my hip, broke my nose and had some subsequent internal injuries.”

He described what happened to him as “peanuts” compared to his fellow soldiers who died.

Like Fitzgerald, retired Army Staff Sgt. Earl Granville said he felt “very, very lucky” the day in June 2008 when his vehicle hit a roadside bomb in Zormat, Afghanistan. The explosion resulted in the amputation of his left leg at the knee, but two of his colleagues were killed.

“These things, we’re going to overcome in life,” Granville said. “They’re going to be thrown at us one way or another and there’s no getting around it. And we have to understand, especially in the armed forces, not to let self-ego overcome your well-being and being happy.”

Over the last two months, six American servicemembers were killed in Afghanistan, including two at Bagram Air Field earlier this month in a suicide attack that also injured 16 American troops and a Polish soldier.

Retired Master Sgt. Leroy Petry, who received the Medal of Honor for his actions in a battle in Paktia province in May 2008, said he heard about the Bagram attack while preparing to return to Afghanistan with Operation Proper Exit.

Despite the challenges, Petry, whose hand was severed when he tried to throw a live grenade that had landed between him and two teammates in that 2008 firefight, said it was important for the United States and its allies to continue assisting the Afghans.

He told the troops: “You all are making a difference... you are all making sure that our injuries and our sacrifices, and the sacrifices of those who gave their lives, is not for nothing. It’s not in vain.”

Hockenberry had a similar message. She said she is often asked whether she hates Afghanistan or its army because an Afghan soldier opened fire on her and her colleagues.

“Absolutely not,” she said. “One bad apple does not make a crop. I don’t know why he did what he did, but these people are fighting for their country just like we fight for ours. And I thank you for fighting with them, and standing by them.”